The Marvel Cinematic Universe has long managed to craft world-ending stakes around the minutia of personal journeys. Tony Stark, heir to his father’s weapons company, learns to take responsibility for his role in global destruction as he becomes Iron Man. Steve Rogers learns to never compromise his own ethical code of steel, even when it defies friends and authority. When we first meet Thor, a mythic hero with otherworldly powers, he is still grappling with his own ascension to manhood in the shadow of a great father. The scale of the MCU has grown over its 26-film run, but the defining traits remain the same. This is a franchise that revolves around grounded and relatable heroes that reflect our own familiar struggles.

But Chloé Zhao’s Eternals doesn’t follow the playbook. In fact, it may be the least Marvel-like movie in the MCU’s run as it trades in the congenerous trappings of human crisis for a grander scope of gods, myths, and legends suffering through an existential one. Our heroes are as alien to us within the confines of this franchise as they are to the earthlings they protect. Eternals takes big swings with philosophical and theological questions that, despite their guiding morality, don’t fit neatly within the Marvel formula (and don’t always meet their mark). That’s what makes the film, which overflows with aspiration at a bloated-yet-joyous 157 minutes, such a singular entry in the MCU.

Eternals follows a group of immortals created by the god-like Celestials as they arrive on Earth 7,000 years ago to guide mankind’s progression and protect humanity from their evil counterparts, the Deviants. Zhao depicts them as legends throughout history: Don Lee’s Gilgamesh is the inspiration for the Epic of Gilgamesh, one of the earliest written works; Angelina Jolie’s Thena becomes the Greek god Athena during a round of story time in ancient Athens. Zhao even throws in a Superman reference to hammer home the separation between these characters and the humans they’re flying above. There’s an otherness to the Eternals that intentionally doesn’t exist with other MCU protagonists.

“We’re playing on a genre that draws so much from mythology, and Superman, for example, was created in the comics and also by these brilliant filmmakers along the way — they’re modern reinterpretations of a mythical characters that exist in different cultures,” Zhao recently told Variety. “Ikaris [Richard Madden] is our interpretation of it. It doesn’t mean we can’t pay tribute to the really iconic version that we’ve all grown to love and has influenced us.”

Zhao goes epic both geographically and historically—London, Babylon, Athens, Gupta Empire, Mumbai, Australia, Amazon, Hiroshima, Iraq, Alaska—which mirrors the grandness of the central characters. After multiple millennia living alongside humanity, the Eternals must now reckon with the planet’s looming destruction. Although first this family of all-powerful immortal beings must wrestle with their place within civilization. Some love humanity, some wish to control it if only to prevent our baser instincts from consuming us (Barry Keoghan’s Druig provides a compelling new viewpoint here that deserves further exploration). Soon, Eternals questions what happens when creations become creators themselves.

The cost of God’s design—in this case, the design of a mammoth six-eyed, red-armored Celestial of seemingly limitless power—is a dense and complicated topic for a mainstream blockbuster. But the film tackles it in an intimate manner, infusing the MCU with a much-needed sense of sensuous romance and cosmic weight. Eternals uses our own history to argue that humans aren’t very much worth saving, and yet they still deserve a chance.

There’s value in giving humanity the opportunity to decide its own destiny, whether it be beautiful progression or ultimate destruction. Existence is about choice, the film argues, and free will yields chaos more often than not. If it is removed by a higher power, it may guarantee the longevity of the species, yet humanity will no longer be . . . human. Embracing free will may be embracing our own finality, but each moment will be filled with something momentous precisely because it is finite.

It’s within this thematic sketching that Eternals, for all its messy oversized grasp, manages to build mythic elements that mimic character emotions. In that way, it’s a beautiful transfusion of legend that creates a new MCU perspective hovering high above the earthbound drama. Some may be put off by the film’s divergence from what has created the most successful franchise in Hollywood history. But we should expect nothing less from a film all about god-like beings rejecting the celestial convention thrust upon them. 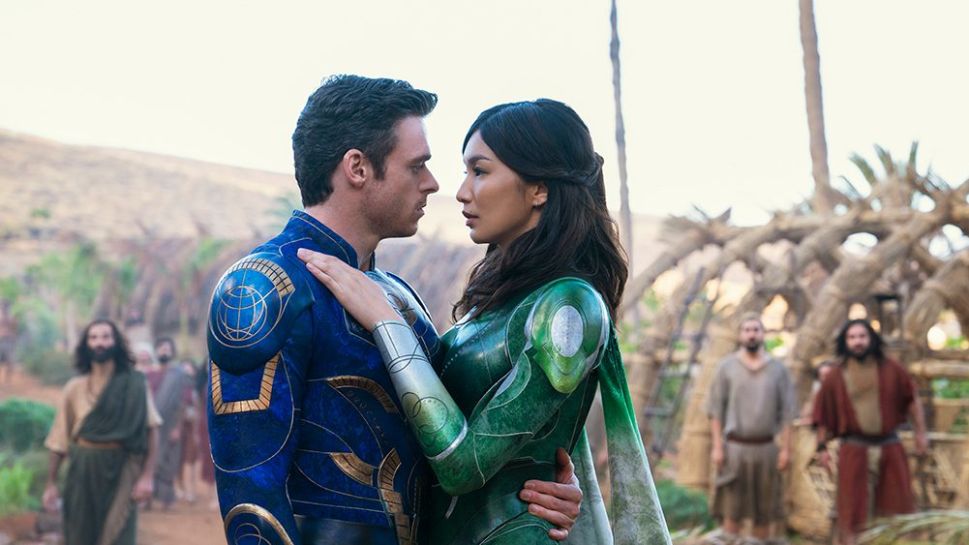