After every shocking news report about mass school shootings, I wonder what the impact is on the lives of the parents left behind. How do they reconcile what happened with why it happened? How do they evaluate the inexplicable loss of their children with the society that caused the damage, and how do they move forward to face a sane and rational future in the harsh daylight of so much grief? These are vital questions that can perhaps only be answered by the survivors, but Mass, a beautifully acted and intelligently written film that soberly tackles these thorny issues head on, valiantly tries.

An Episcopal church in Idaho provides a meeting room usually reserved for groups like AA and Alanon as a neutral space to welcome two couples who lost their sons in a life-changing act of violence that claimed the lives of 11 people.  Richard and Linda’s (Reed Birney and Ann Dowd) son Hayden was responsible for the death of Gail and Jay’s (Martha Plimpton and Jason Isaacs) son Evan, and although years have passed since the incident, the parents have never recovered.  Seeking closure they hope will enable them to get on with their lives, they’ve agreed to this meeting, although they all harbor doubts, fears, and distrust.  Gail and Jay are quietly respectful, agreeing beforehand not to subject the parents of the killer to a formal interrogation, but as the conversation progresses, their need for understanding grows, too, until their pent-up rage turns to thoughts of vengeance and demands for retribution.  Richard and Linda reach out with compassion (Linda even presents Gail with flowers), but their efforts to offer tea and sympathy evolve into defensiveness and pleading as they make their case for the value of their own disturbed son’s clemency.

Eventually all of their diverse feelings come out in explosions of grief, blame, bitterness and amnesty.  First time director Fran Krantz imposes a claustrophobic style usually better suited to the stage than the movies, but his screenplay examines the emotions of four distraught people with a truthfulness that fills the screen with life.  Computerized special effects and unnecessary flashbacks are carefully avoided, allowing Mr. Krantz to focus his camera on the tense emotional attempts of the perfect cast to make rational sense of a shared devastation with equal screen time.  The result is wrenching for actors and viewers alike. Encomiums of praise deservedly go to the exemplary cast—Martha Plimpton, who has never been more appealing on film, rugged, under-appreciated Jason Isaacs, the three-dimensional stage star Reed Birney and the persistently balanced Ann Dowd.  Their reactions—to the material and to each other—are piercing and real.  Having said all that, allow me a small caveat:  the claustrophobic setting sometimes robs Mass of some badly needed cinematic dynamics, and as effective as the four leads are, in the course of nearly two hours they begin to seem self-aware and over-rehearsed.  Never mind.  Despite its meaningless title (despite the setting, there is no mass or religious connotation of any kind in Mass) this is a film of rare ideas and smashing performances. 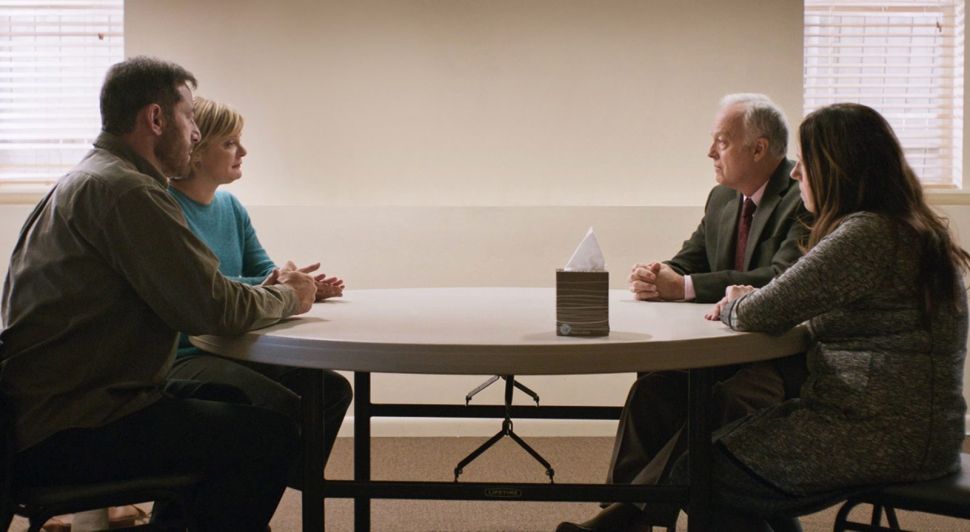