Mass, the feature debut from writer-director Fran Kranz, is a suffocating, emotionally riveting piece that walks a few difficult lines. Stylistically, it reads like black box theatre, with its minimalist approach to setting and plot: four characters in one room dealing with the aftermath of tragedy. Thematically, the material it handles is incredibly volatile. Years after another deadly American school shooting, the parents of one of the victims sit down with the parents of the shooter, in an attempt to better understand the horrific events which have come to define their lives.

The film doesn’t jump in headfirst, but instead establishes its uncomfortable premise through the eyes of curious onlookers. On a winter morning in a small town, Church employees Judy (Breeda Wool) and Anthony (Kagen Albright) set up a table and four chairs in the parish basement. Their dialogue is business as usual, between mild bickering, butting heads about dishes, and small talk about the various self-help groups that use the Church on weekends. However, an unspeakable tension clings to each word, especially when they mention the impending arrival of a social worker, Kendra (Michelle N. Carter), who has orchestrated a meeting later that morning, between four people whose names they recognize. They dance around the specifics though, and they walk on eggshells once Kendra arrives. All we as the audience can gather is that this meeting is unusual for the Church, and its participants are known to the public, though no one dares mention why.

When the time comes, Jay (Jason Isaacs) and Gail (Martha Plimpton) hover outside the Church, but decide on a short drive instead of facing whatever awaits them inside. They sit quietly by an unassuming fence which has a faded ribbon tied to it — it’s either some kind of memorial, or it happens to look like one — until Gail forces herself to break her silence. “I’m not ready to say it,” she tells Jay. Ready to say what? And to whom? The film initially plays coy with these details, but the performances are powerful enough to clarify each emotional beat before it’s made explicit.

Something heavy weighs on Jay and Gail, and a mutual, subdued anger seems to have driven a wedge between them. This could mean one of two things: that they’re the parents of the perpetrator, or the parents of one of the victims. Either way, they’ve lost a child to a horrific mass muder-suicide. However, the moment they’re joined in the basement by Linda (Ann Dowd) and Richard (Reed Birney), the difference in cadence and body language between the two couples makes the dynamic crystal clear.

While the who’s-who is by no means a plot twist, discovering it as the emotional pieces fall gently into place is part of the film’s design. The couples exchange pleasantries and catch each other up on their still-living children, unsure of how to broach the subject of the ones they lost. Isaacs plays Jay with a calculating, almost utilitarian resolve. He knows exactly what to say — or at least, he thinks he does, but he doesn’t count on being overwhelmed by the horrifying realization of how powerless he truly is in the face of tragedy. Gail, whose emotions are just as paralyzing, takes a more passive approach, allowing Plimpton to stew silently and work her way through a nihilistic fog.

Although, while Jay and Gail are at least on the same page, in terms of what they hope to find in this room, Richard and Linda throw a wrench in the proceedings by bringing entirely different energies to the table. Richard doesn’t want to be there, and he makes it known. He rattles off information about the case, and hurriedly answers questions he’s answered a thousand times before. Birney refuses to put Richard’s emotional cracks on display — that is, until the questions about the shooter become more difficult to parse, and the whole event begins to make even less sense than it did before. Meanwhile Linda, played by Dowd, is the most forthcoming of the bunch. She brings flowers. She offers family photographs as olive branches. She speaks in polite platitudes, but the pain she hides beneath each smile becomes more difficult to conceal. Eventually, Linda’s struggle to stay afloat reveals the film’s most raw emotional thread: a shattering self-hatred, which leaves her unable to conceive of herself as anything but a failure of a mother, and someone deserving of her pain.

Watching the four actors tiptoe their way through an emotional minefield, while maintaining a veneer of decency and civility, is genuinely discomforting. As one might expect, the façade doesn’t last. The couples already know each other when they enter the room, and their entire history appears to have played out in the public eye over several years. To unearth this dynamic, Kranz opts for a “tell, don’t show” approach, which, though it runs counter to the instincts of visual storytelling, imbues each new dramatic beat with a painful reluctance, and each recollection of events with a lingering, phantom trauma. The film’s very premise becomes a dramatic tug of war. We, as the audience, want to know what’s going on, and Kranz is eager to tell us, but his fragile characters have no choice but to withhold their story at first, even though discussing and dissecting it is why they’ve gathered in the first place. It feels as though they might shatter at the slightest touch.

Kranz, known for playing comedic roles in Joss Whedon productions, turns out to be a deft dramatic storyteller. He traps the viewer within the characters’ collective orbit, rarely allowing the frame to break away from the intensity of the table, as the camera invades their most private ruminations. Aesthetically, it’s the kind of thing that ought to get repetitive, but Kranz, cinematographer Ryan Jackson-Healy and editor Yang Hua Hu temper each dramatic beat, and allow the camera to move in tandem with each character’s emotional state. It’s a simple, basic set of visual tricks — keeping the camera locked off for the most part, pushing in when new information is revealed, and moving to an unstable, hand-held equilibrium when tempers begin to fly — but the film avoids the temptation of switching between these modes of expression too soon or too often. It holds back, allowing tension to build as its quartet of blistering performers dictates the story’s rhythm, and the film only shifts gears in order to keep up with them.

Mass runs a mere 110 minutes, and for well over an hour, the couples sit across from each other in a tiny above-ground basement, lit only by the soft sunlight bouncing off the snow outside. The room’s production design is sparse — an old piano here, a stack of chairs there, a few un-touched snacks in the corner — but a crucifix wall-hanging is visible in every other shot. The film is aptly titled, referring both to the mass shooting that looms over the characters, and to the very act of gathering in a Church. The four parents are constantly watched over by Christ, whose most prominent teachings were concerned with love, forgiveness and turning the other cheek. Forgiveness is second nature to Christ in most scriptures, but in Mass, it’s a punishing process, because it requires speaking for the dead.

In this way, the film feels like a concentrated dose of American failures. The topic of gun ownership comes up, but ends in a deadlock that neither couple has the power to solve. The violence in the characters’ rearview, and the sheer difficulty of forgiveness afterwards, play like a combined inability to live up to the American ideals of life, liberty and happiness, and the ideals of Christianity (which, though America is technically secular, form the basis for the country’s perceived moral framework). Without portraying gun violence on-screen, the film zeroes in on the emotional violence in its aftermath, from the way it ravages communities, to the way it begins to chip away at people’s souls.

Perhaps the most difficult thing about this gathering is that while most of the information is new to the audience, it’s been rehashed by the characters many times over. By this point, they’re exhausted by it. The parents of the shooter already accept responsibility. They’ve already been made painfully aware of their failings. The parents of the victim still harbor fury and grief that, all these years later, cannot possibly be productive. All four are at the end of their rope, but this meeting is their last-ditch attempt to piece together the shooter’s life from scratch, to uncover some detail they missed, and to find some kind of explanation that finally makes sense.

Such is the nature of tragedy, though. It so rarely makes sense, even if you can trace the events that led up to it. Grief, in the face of horrific violence, is seldom about trying to figure out “how” something happened. Beneath that question, it’s about trying to ascribe it a “why.” An emotional rubber-stamp, not only to define the tragedy, but to seal and contain it, and to make it hurt less. In Mass, this search for impossible closure leads four desperate souls to trap themselves in a scant room marked with symbols of salvation, but the room may as well have the Second Empire stylings of Sartre’s No Exit. Attempting to reconcile tragedy with some reason, or greater good, or cosmic sense of justice is, quite simply, Hell. There’s tremendous power in a film that understands this about loss, and captures the overwhelming rage, confusion, guilt and self-loathing that can fester in its aftermath.

Driven by four challenging, nuanced and completely distinct performances, Mass is an emotional razor-wire. It understands that a mass shooting isn’t an isolated incident, but something that ripples through time, and a collective American scourge that never seems to subside. The film is unrelenting, forcing its characters to mine emotional depths that leave them irrevocably changed, even as they leave the room and carry some version of their trauma back out with them. 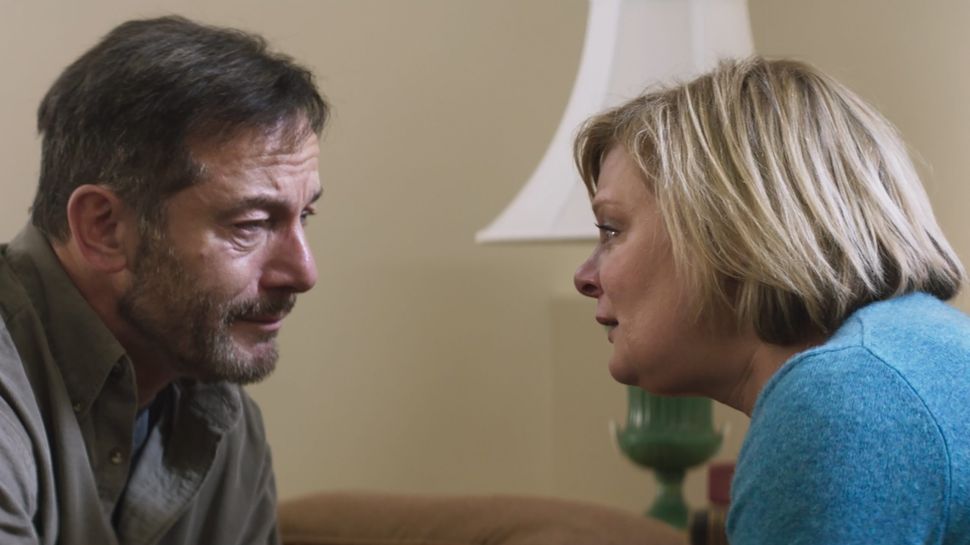