Although the ensemble cast of Hulu series Nine Perfect Strangers boasts the likes of Nicole Kidman and Melissa McCarthy, it’s been Grace Van Patten’s work as damaged teenage Zoe that has stood out most. Van Patten, who hails from New York City, has been acting since she was eight, scoring her first role on The Sopranos. The actress, who also works regularly on the stage, has had small parts since, notably in Noah Baumbach’s The Meyerowitz Stories and David Robert Mitchell’s Under the Silver Lake. But with Nine Perfect Strangers and the lead in Mayday, from writer/director Karen Cinorre, 2021 is proving to be Van Patten’s year.

In Mayday, out October 1, Van Patten plays Ana, a traumatized hotel worker who is transported to a dream-like world where women are at war. She joins a group of fellow girls, led by Mia Goth’s Marsha, who lure soldiers to their death using radio transmission—a reference to the sirens of Greek mythology—but Ana quickly finds that she isn’t quite so ruthless. It’s a strange, surreal film, filled with evocative imagery, and it gives Van Patten a strong showcase for her talent. Fans of the burgeoning star will surely note that Ana, who is learning how to cope with her broken self, also has an odd resonance with Zoe, the actress’s character on Nine Perfect Strangers, further unifying her breakout year.

Van Patten spoke with Observer about what drew her to film and what it meant for her to work with a cast and crew of primarily women. She also discussed Nine Perfect Strangers, which recently aired its dramatic finale, and what we can expect next.

Observer: You’re having quite a moment with Nine Perfect Strangers and Mayday out at once.

Van Patten: It’s fun! I’m so happy the world is finally able to see both of them. I shot Mayday in 2019. It’s been quite a journey.

When you first read the script for Mayday, did it feel like something unusual?

Yes, I feel like I was transported just by reading the script. And I had never felt that way reading anything. I put it down and picked it up right away and wanted to read it a second time. I wanted to attempt to understand everything. And I realized the beauty of this script was the unknown and the endless amount of meanings you could take on from it and how interpretable it was. Within all of the fantasy elements and the magic of it, it really was a story about a young woman finding her inner strength and power. I thought it was told in such a unique, original way, that I’d never seen before. And the idea of working with all women was so exciting to me. I hope I get to do that more often! I hope there’s more opportunity for that.

Is that a pretty rare offer to work with mostly women?

Oh my gosh, yes. I’d never had that opportunity before. I was like, “I have to do this. This sounds like the most amazing experience ever.” And Karen is such a visionary. Watching her short films you knew that Mayday was going to be epic in the way it looked and felt and the world she was going to build.

Where did you shoot?

Was there research you could do ahead of a project like this?

Karen did tell us a lot about her influences and a lot of it was Greek mythology and women in mythology. Which I thought was so wonderful and I really didn’t know much about. That was a huge inspiration for her. But in terms my research I really looked more into Ana’s mindset. I read a lot on grief and trauma. I definitely learned more about that. [We shot] for almost three months and we were so lucky to have that time. We were able to get there a week or two before we started filming and just talk about it and rehearse and do weapon training and get to know each other.

It’s really interesting to watch women in war. It’s not an image we see very often.

No, not at all. It was so different in that way. I loved how the costume played a role in that because they were, in a way, a type of uniform. But they were all also individualized and personal to each character, which I liked. They were all similar, but had their own personalities.

Did you come out of this having learned something about yourself as an actor?

Definitely. I feel like I learn something new from every job and it’s different, like the process of every role and the approach and the relationships to the actors and the director. It’s always so different and there’s no way to prepare for the next one or know what it’s going to be like. It was challenging in that way. And I had never done a movie where I’m in every single scene, so there was no other option than to give my heart and soul to it. And sometimes that’s really scary. But Karen created such a safe, comfortable environment and I think it felt that way because it was all women. We all felt safe to be vulnerable with each other.

Once you’ve worked in a situation like that does it impact what you want to do going forward?

I would love to work with as many women as possible. We need to stick together. I think it’s amazing what Karen and many other women are doing right now—writing and directing and creating more opportunity for younger women to follow them in their footsteps. I’d love to continue to do that and play complex female characters. I’ve been lucky with that.

I do feel, especially with Zoe on Nine Perfect Strangers and with Ana, they were both similar in the way that they are so broken and they have such tragic stories but you see their progress in it. They get to have a journey, which so many characters don’t. It gets separated and gets chopped off. You really get to see their journeys play out.

It also seems important that female characters are being allowed to be broken.

Exactly. That they’re not just surface-level, stereotypical females. They’re real humans and they’re going through human things. The roles are deep and layered and beyond the words on the page.

Did you shoot Mayday before being cast in Nine Perfect Strangers?

Yeah. I think I actually auditioned for the first time when I got back from Mayday. But then we didn’t film until much later. We filmed in Australia [during the pandemic]. It was a crazy, crazy year for all of us.

When you finally got to the set of Nine Perfect Strangers, was it at all intimidating to be surrounded by that cast?

It was like, so many emotions. I was so excited. I’m a huge fan of literally every single person I got to work with, which is crazy. And they were all such amazing human beings. I think because we were all shipped off to Australia in a place we were all unfamiliar with, it forced us to connect on a different level. Similarly to Mayday, we were all in this spot all together. It was a really beautiful experience.

Did you have any real-life experience with psychedelics to use as inspiration?

My mom’s listening! But no, I’ve actually never hallucinated before. I’m very curious and I want to, but I am nervous. It’s apparently the key now. People swear by it.

The show makes it look simultaneously amazing and horrible.

Exactly. It’s not glorifying drugs, which is good! But I’m definitely curious. Not in the intense way I did it in Nine Perfect Strangers, but a balance.

When you first started acting are these the types of roles you aspired to?

My only hope is to play complex characters. That’s literally all I really look for: that when I read a script I feel so drawn to the character and who they are. I do think Zoe, from Nine Perfect Strangers, and Ana have such a similarity between them, but that was not purposeful. Those are just the deep roles I came across and really wanted to be a part of.

Does working with someone like Karen encourage you to consider writing or directing?

Yeah. I admire her so much. And everyone who does that, especially women who are giving other women opportunities. I can’t imagine writing a script. It’s just crazy to me. And to write a good script—it’s mind-blowing. I’m very inspired by that and by her.

Have you filmed anything since Nine Perfect Strangers?

No. Nothing since then. I did stay in Australia for a few months after we filmed and didn’t want to leave. It was so beautiful. And it’s a real wellness retreat when it’s not being used as a set. It’s a real resort. I didn’t feel rested there though—I needed a wellness retreat after filming [the show]! I needed to check right in. It was such an amazing experience, but it was definitely heavy being in that mindset for five months. Zoe does make progress, but she is very, very broken and has been through a lot. It definitely took me a few months to shed those emotions off of me.

Will there be a second season of the series?

I haven’t heard that. Who knows. It could go on, or it could be a whole different group of nine guests. Make it an anthology!

I’m really excited about what I’m doing next. It’s another show on Hulu, called Tell Me Lies. It’s another very complex female character going through a lot. It focuses on this very toxic relationship with a guy she meets in college and the addictive entanglement of love sometimes. She goes through everything, every emotion. And it’s a TV show, a full-on TV show, which I’ve never done before, so I’m excited to be able to spread it out and really take time with that journey.

I know. I really need a comedy! Hopefully soon. 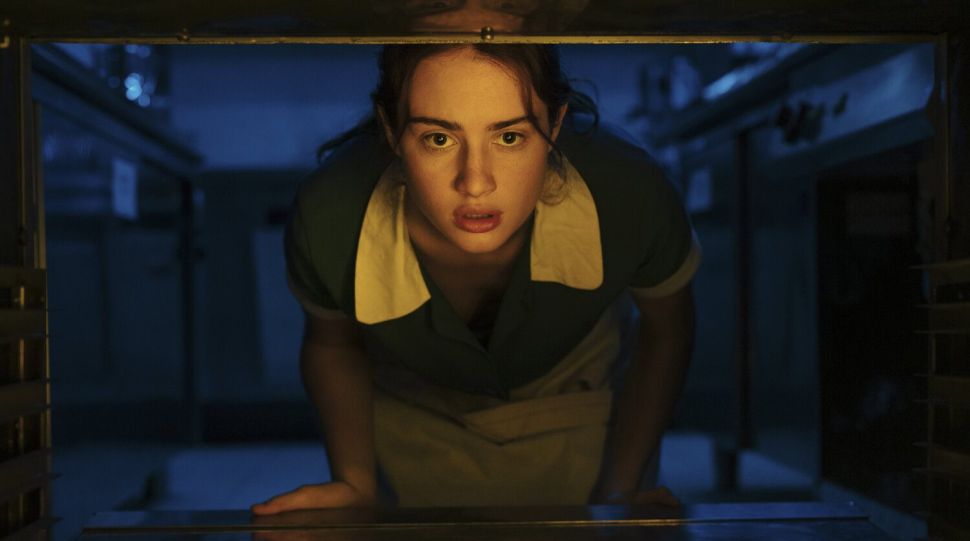