Depraved, delirious, and downright stupid, Last Night in Soho is two hours of amateurish drivel by B-movie director Edgar Wright (Baby Driver, Shaun of the Dead) that pretends to be half-retro Swingin’ Sixties comedy and half-horror thriller.  It is neither, but for a two hour assault on the I.Q., it’s in a class by itself.

Eloise is an orphan with an overconfident passion for fashion design and not much apparent talent to back it up whose mother’s suicide left her in the British countryside to live with her kind, indulgent grandmother (Rita Tushingham, of all people, in a terrifying yellow fright wig).  After years of loving Sixties clothes and sewing retro rags, Eloise, for reasons unexplained, wins a scholarship to study art in London.  The object of ridicule from the other students, who understandably find her clothes tackily retrograde, she flees her overbearing room and finds a place of her own, settling into a rooming house in Soho, London’s seedy red-light district, owned by a wrinkled and mysterious landlady (the great Diana Rigg, in her final screen role), and the film shifts into the first of many gears.  Eloise dies her hair blonde, paints black circles around her rolling, exaggerated eyes like a rabid raccoon, and becomes infatuated with a trashy would-be barmaid named Sandy (Anya Taylor-Joy), who dreams of a show business career singing songs by Cilla Black, Petula Clark, and Dusty Springfield.  With a supernatural ability to move in and out of the 1960’s, Eloise imagines Sandy was murdered in her bed in a former life.  The plot about studying fashion design is abandoned for a curdled subplot in which Eloise and Sandy become one and the same and you need a spreadsheet to keep up with the contrivances.

Eloise suspects the killer is one of Sandy’s aging suitors (played by an aging Terence Stamp) who turns out to be an ex-cop, and falls instead for her idol’s tall, handsome manager (Matt Smith), who turns out to be Sandy’s pimp.  Eloise’s naïve downhill descent into a hell of blaring horns, vomiting drunks and battered hookers wearing hideous clothes is illustrated by marquees of the James Bond movie Thunderball, interminable musical reprises of gushy, lugubrious rock tunes like “Downtown”, and violent scenes of carnage and bloodshed that have no meaning.   Manufactured, air-conditioned and garishly swathed in colors of plum, puce and pomegranate, the mere sight of the sets and costumes is so overwrought that the whole movie borders on hysterics. The imagery is ghoulish and flamboyantly cheesy, but the plot is too vague to sustain interest. Aimless scenes of Eloise watching Sandy’s descent into the madness of the criminal Soho underworld are so repetitive that half of them could be deleted at no cost to the narrative.

The movie ceases to make sense long before the big finale, when Diana Rigg bangs her way out of the supporting-role shadows and takes Last Night in Soho hostage with one plot twist after another.  The problem with this movie is the way it continually defies logic to the point of silliness.  That’s all today’s target audience for Edgar Wright movies asks for.  They reject realism, logic, coherence and anything that aims to instruct, uplift, or reflect truth in exchange for fantasy, noise and unpleasantness.  I saw it in a movie theater with ten people.  As the whole thing mercifully clattered to an end, two of them applauded.  The jury is still out, but I rest my case. 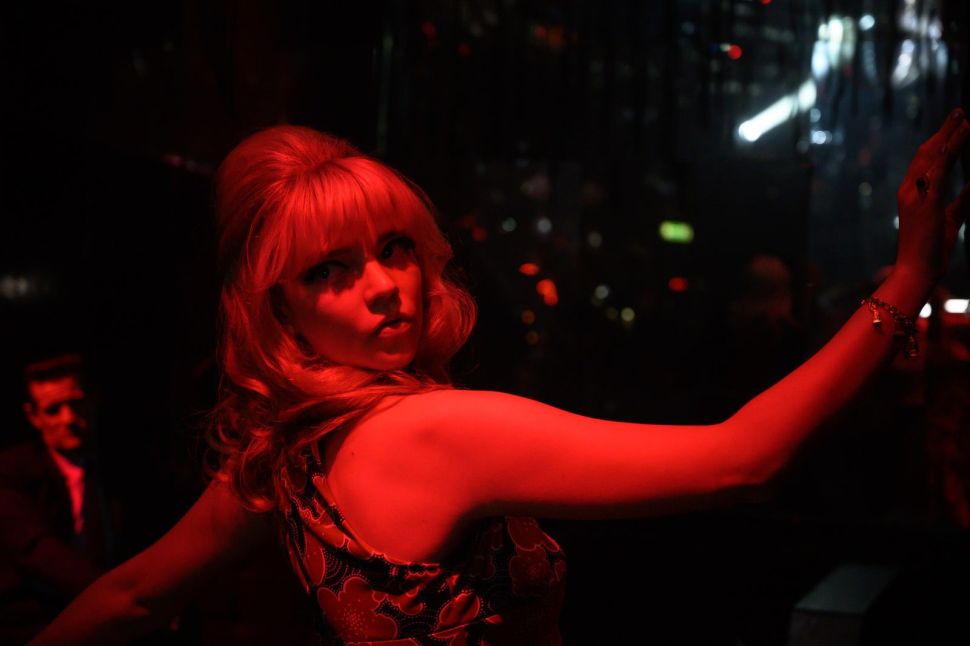