Taste is subjective. For every television series lauded by legions of fans, there’s a faction of haters ready to launch a counter-offensive. Consensus remains ever elusive in the world of entertainment. So rather than whip up a reductive list that declares with un-earned definitiveness that the following shows are the best Netflix originals ever, I reigned my focus into something closer to home. Specifically, my personal 15 favorite Netflix original series.

These selections are based on nothing other than my tastes and preferences as a proud couch potato television fan. Over the course of Netflix’s time as an original content provider, these are the series I’ve been most drawn to. The only criteria for this ranking was that I had to have seen every single episode of the show. So if one of your absolute favorite series is missing from this list, you can safely assume one of two things: 1) I have not yet finished the show in its entirety or 2) I am intentionally disrespecting your individual opinion specifically.

Accuse me of recency bias if you want, I don’t care. The South Korean drama Squid Game has rapidly become a full-fledged global phenomenon and is on pace to become Netflix’s most-watched original series ever, according to co-CEO Ted Sarandos. But that’s not why it makes my list.

Squid Game is a high-concept marvel that manages to use its splashy hook—poverty-stricken people gambling their lives for millions of dollars—to fire an outrageously unique shot across the bow on modern capitalism. Surprisingly tender character development and immaculate production design and cinematography combine to offer up 2021’s most surprisingly engaging drama.

Anyone who reads my work here at Observer, follows me on Twitter, or listens to my podcasts knows I’m absolute sucker for superheroes. I love comic book material and since this is my list, I can embrace my bias! While I can more-or-less do without any of Netflix’s other Marvel shows, Daredevil was a real ripper over its three seasons. (Don’t worry, fans, Charlie Cox’s Matt Murdock will be reintroduced into the MCU soon).

Daredevil provided the modern quip-tastic iteration of Marvel with a much-needed infusion of edginess. It also delivered the absolute best action fight scenes this side of Shang-Chi. In retrospect, it still feels like the least sanitized MCU-adjacent project of the 2010s.

The Fantastic Four are affectionately referred to as “Marvel’s first family.” That same dynamic applies to The Umbrella Academy, though in a far more dysfunctional way. Super powers, time travel, a needle-drop soundtrack and childhood trauma—this show has everything!

For all of its fashionable flares, its foundation is built on the infuriating yet loving, heart-breaking yet hilarious bonds we share with family. As such, The Umbrella Academy more capably traverses interpersonal dynamics and shifting tones better than most Netflix originals. There’s also a talking monkey, which helps.

Natasha Lyonne, who created Russian Doll with Amy Poehler, has never been better than she is here in this creative dramedy about a woman who gets caught in an infinite time loop of her own demise. It’s high-concept without ever getting lost in the weeds; it’s hilarious without ever sacrificing heart. Who else could pull off “Thursday—what a concept?” with a straight face?

Often, the vehicles shows choose to convey their central themes and messages and careen off the tracks in melodramatic, self-righteous fashion. But the lessons of Russian Doll always felt organically earned and achieved, which is a testament to its sharp writing and conceptual execution.

There’s always been something slightly ethereal about Aziz Ansari’s Master of None, which loves to mix in surrealist elements to its otherwise steadfastly grounded narrative. Season 1 was enticing, Season 2 was a revelation, and Season 3 made very little noise but remained quietly affecting and emotive. At this point, the show has likely run its course. But what a strange and uniquely satisfying journey it was.

Who drew the dicks?

If I were to tell you four years ago that such a sentence would be trending on Twitter and directing a ravenous pop culture conversation, you would have rightly reported me to the appropriate authorities. Yet beneath the vulgar toilet humor of American Vandal existed a deep well of empathy for anyone who has ever felt apart in their lives.

Over the course of its two seasons, American Vandal managed to draw a through line from the popular kids in high school to the losers, freaks and geeks. Everyone, from the jock to the stoner, was more innocent, guilty, and similar than we had imagined. Who knew dick jokes could be the gateway to such healthy emotional authenticity? Bonus points for the hilarious satirization of the true crime genre.

I just love the contrasting yet complementary dynamic between Christina Applegate’s more strait laced Jen and Linda Cardellini’s free-spirited Judy. Casting is everything and the chemistry between the two could anchor an informercial. Creator Liz Feldman displays such a strong grasp of the tragicomic vibe Dead to Me is aiming for as she deftly blends humor and drama in an emotional 360. The show knows all to well that you can’t appreciate the sweet without the sour.

Taboo? Too risqué? Off-limits? Big Mouth laughs in the face of conventional norms as it tackles the grossest, most embarrassing, uncomfortable and awkward elements of puberty in hilariously excruciating fashion (there’s talking vaginas, sex-crazed hormone monsters, and monstrous tampons. You get the idea). Nowhere on Netflix has a shared internal monologue been so accurately externalized. Kudos to creator Nick Kroll.

Every humiliation from your past that pops into your head as you lay in bed trying to sleep is laid bare in Big Mouth. But the purpose isn’t to ridicule, it’s to normalize all of the flaws, missteps and natural changes that make us feel alienated, different, or less than. There’s a soft heart to Big Mouth‘s hard line gross-out comedy.

Observer spoke with Peaky Blinders creator Steven Knight in 2019 about the looming endgame to his British crime drama, which will conclude after the upcoming sixth and final season. Will Thomas Shelby (Cillian Murphy) find redemption? Whether he does or doesn’t, the stylistic crime-riddled ride has been an energetic journey through familial division and 20th century industrialization.

We will use this time to take a moment of silence for GLOW, which was renewed for a fourth and final season before Netflix changed course at the onset of the pandemic and cancelled the series outright. Yes, I’ll continue to watch Netflix. But I won’t forget. Oh no, I won’t forget.

To me, Sex Education couples the infectious optimism and positivity of Ted Lasso with the sex-positive humor of Big Mouth. That’s a pretty damn good combo. While the recently released third season may be stretching itself a bit too thin across its ensemble cast, the British dramedy remains consistently self-aware.

Sex Education has the uncanny ability to find very specific niches—whether it be sexuality, family dynamics, puberty, or self-worth—and broaden them out as to be accessible and relatable to everyone. Universality found in specificity—it’s creator Laurie Nunn’s greatest strength.

Stranger Things is likely the biggest IP Netflix has developed when all factors are considered. While I remain skeptical as to its longevity, there’s no denying this may very well be Netflix’s most fun show overall. Paying homage to the kid-centric horror spearheaded by Steven Spielberg and Stephen King, Stranger Things is a pitch perfect amalgamation of nostalgia that leaves enough room for its own creations.

It’s fun, funny, sweet, and breezy, not to mention an endless source of high value memes. With its love for the 1980s and blend of need-to-know action and horror, Stranger Things was practically reverse-engineered for the binge culture streaming age.

Is it at all possible that The Crown is somehow underrated in the annals of Peak TV prestige? Despite the attention and accolades, the massively ambitious era-spanning saga still somehow feels under-appreciated when discussing the great long-running dramas of recent memory. It’s an alternative take on The Godfather,  zooming in on the good and (mostly) bad of the monarchy.

It’s rich, not just in the lavish sets and production design that cost hundreds of millions to produce, but in its texture of seemingly unknowable elevated figures of history. That it can feel additive and cohesive from era to era, even as its main cast changes to match the advancing ages of its character, is a feat unto itself.

Leave it to executive producer and shadow showrunner David Fincher to deliver one of Netflix’s best original series ever. Atmospheric, cinematic, compelling, anxiety-inducing. Choose whichever superlative you prefer and I’m sure we can find a place for it among Mindhunter‘s excellent two seasons.

As far as thrillers go, Mindhunter managed to manufacture earned tension while rarely venturing into life or death situations. The riveting nature of its more academic approach speaks to how well crafted its characters were and how fascinating the plot, which revolved around the FBI’s discovery and reluctant classification of serial killers, could be.

Sadly, Mindhunter is unlikely to ever return as the cast were released from their contracts when Fincher turned his focus to Mank in 2020.

I’ve written quite a bit about how Dark both is and isn’t the second-coming of LOST in ways that are both positive and negative. But when viewed as a whole across its scintillating and mind-bending three seasons, Dark emerges as not only my favorite Netflix original series ever, but one of the best sci-fi shows in TV history. Hyperbole? Watch the show and then come talk to me.

Dark‘s immaculate narrative construction is a remarkable campaign in overlapping non-linear storytelling that, despite its twists and turns, never falls into disarray or chaos. Instead, the tightly plotted maze follows a beautifully pre-determined course that provides a necessary degree of completion. 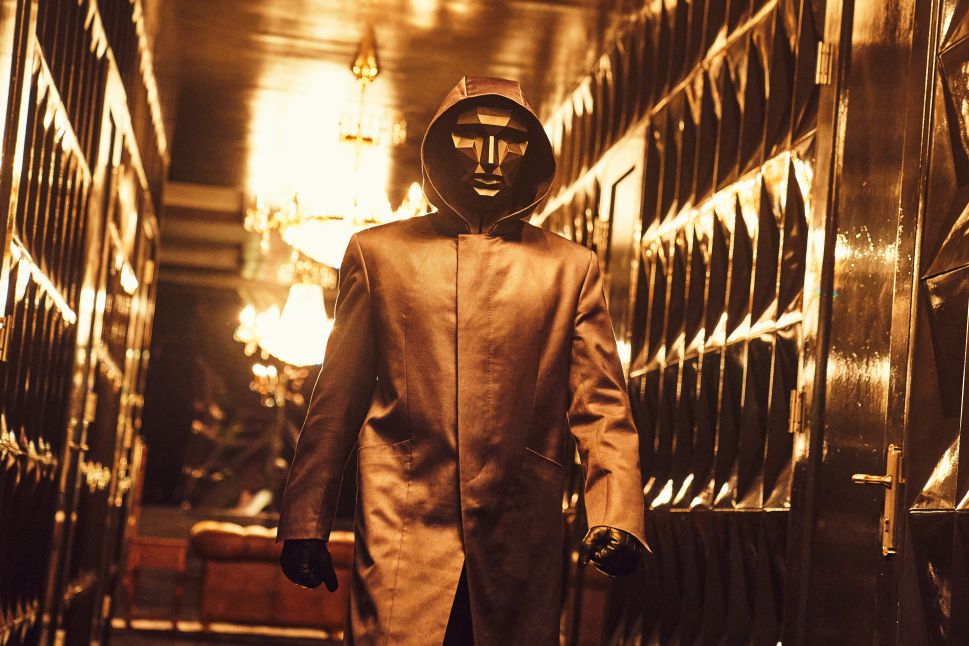