This piece contains spoilers for season two of Locke & Key.

Locke & Key is one of the most celebrated horror graphic novels of the past few years, a story as dark and terrifying as it is nuanced and emotional. The story follows the Locke kids, who move back to their ancestral home after their father is brutally murdered, and discover that their new home is full of magical keys with different powers—and also an otherworldly demon hellbent on destroying their family.

After a decade of failed adaptation attempts, Netflix finally launched the first live-action adaptation of the Joe Hill and Gabriel Rodriguez comic last year, and now the show’s second season is finally available to stream. The first thing fans of the comic will notice going into this season are the significant changes from the source material—notably the addition of another otherworldly demon that has possessed the school bully Eden (Hallea Jones). So we reached out to showrunner Meredith Averill to run us through the big reveals of the season, how things changed from the comic, and what we can expect from the already completed season two.

“I think that sometimes when shows have a constant singular villain it runs the risk of feeling a bit monotonous and stale,” Averill told Observer regarding the addition of Eden as a companion to the demon Dodge (Laysla De Oliveira), also known as Gabe (Griffin Gluck). “We knew we wanted to end season one with one of our kids being struck by a demon bullet. And in our mythology, when a human is struck by a demon bullet they retain a certain amount of their personality, so Eden was a fun choice for that character as she is brand new to this world.”

A big part of the season focuses on the dynamic between Dodge, who has been in this world for decades and has a certain level of comfort living among humans, with Eden, who is completely reckless and has to be kept in line lest she threatens to ruin Dodge’s plans. It presents an added obstacle in her plan to destroy the Lockes. “That levity adds another layer to the character and it stops them from being too mustache-curly and instead gives them a bit more of an edge,” Averill adds.

Indeed, the original graphic novel followed the same formula for most of its run: Dodge is discovered by someone, and right before they tell the Lockes, Dodge kills them and goes back into hiding. It’s a cycle that repeats over and over. The season one finale added a new dynamic by giving Dodge the ability to assume an entirely new identity no one in town knew about, and a sidekick in Eden. This makes for an interesting Harry Potter and the Order of the Phoenix-like run that revolves around Dodge seeking to build an army of demons, while the Locks have no idea that their enemy is still alive.

The reason they are unaware is that the Lockes spend most of season two dealing with the fact that they are growing up, and once you turn 18 you forget all about the magic. In the graphic novel, we learn of the Riffel Rule, created by an ancestor of the Lockes who made a key that makes everyone who turns 18 forget about the magical keys in Keyhouse. “It felt like a really beautiful metaphor for something that is quite universal,” Averill said. “Which is this desire to want to hold onto your childhood and not wanting to grow up and lose this aspect of your innocence.” Since the story is mostly told through Tyler’s (Connor Jessup) perspective, the season is concerned with his looming 18th birthday, and also the heartbreak of seeing his girlfriend Jackie (Genevieve Kang) forget about their time together with the keys. “That was a conversation we had very early on in talking about what stories we wanted to expand on this season,” Averill continued. “It’s something everyone can relate to and a lot of the stories this season revolve around memories and the memory key, from Duncan, to the ending with Bodie holding the key next to Nina.”

It doesn’t help that Tyler has seen firsthand the psychological damage caused by forgetting about magic from both his mother Nina (Darby Stanchfield) and his uncle Duncan (Aaron Ashmore), the latter of which we know had his memories of magic stolen against his will by his older brother and his friends when Duncan was a kid. “We just love Aaron but weren’t able to give him a ton to do in the first season due to time,” Averill told us. “We definitely wanted to give him a much larger story this season, and in the writers’ room, we referred to him as ‘Duncandore’ as in Duncan and Dumbledore, because he steps into this mentorship role once he has his memories restored. He could kind of guide our kids, and that relationship continues into season three.”

One thing that Netflix’s Locke & Key does well is take characters from the comic that were underused and give them larger roles with the benefit of hindsight. Though Duncan was a big part of the original story, he was essentially a male version of Nina, just clueless about what is going on, and unable to do much but be surprised by what Dodge does. In the show, however, he serves as a guide to the history of Keyhouse and the magic, having grown up knowing about the keys and being better prepared for the horrors that are coming.

Just like Tyler and his siblings try to mend the crime of stealing Duncan’s memories, they also have to fight Dodge, who was basically created by their dad’s hubris. “So much of our show is about trying to right the wrongs of the past and maybe inadvertently making things worse,” Averill said. Another character that gets a bigger role this season is Erin (Joy Tanner), who helped steal Duncan’s memories and becomes a key part in restoring them after the kids rescue her from being trapped inside her own mind. The comic essentially ends when she gets her memories back, but the show adapts that plot point early in season two, and makes Erin part of the team. “We wanted to explore the dynamic between her and Nina, as Erin was Rendell’s old girlfriend and the last thing she remembers is seeing him 25 years prior, and now she meets his children and his widow. At the same time she is meeting Duncan and it’s bringing up all this guilt for what she and her friends did to him decades before. The two have a nice bond since they knew each other as kids.”

Though this is an adaptation of the graphic novel that started back in 2008, the live-action adaptation includes characters not in the main story, but in spin-offs that have been published since the series ended in 2013. One such character is Chamberlain Locke (Chris Britton), the ghost of an ancestor of the Locke siblings that first explained to their father Rendell (Bill Heck) how to create a magical key, which kickstarted the events of the series and created Dodge. “He’s aware of everything that’s happened so he can become a source of information, and also there’s a part of him that feels responsible for what happened to Duncan and Rendell,” Averill added. “We are opening up the world of our show and making it a little bit bigger.”

Indeed, the season is moving beyond the main story of the comic by cramming half of the story into just 10 episodes while adapting the very end of the story, with Tyler crafting a new key and Dodge finally being defeated. Yet, as Averill points out, there are still stories from the comic left unused, and even keys left to see, as we saw the addition of the Small World key this season which comes from a spin-off comic. “There’s certain stories left that you will see in season three, there’s also new stories and new keys. We’re lucky to have this wealth of not just the main six [volumes of the comic] but all of the ancillary comics too.”

Though Averill would not spill the tea on season three, we do know a fair bit of what it will be about, as this season introduced a new family with a surprising connection to the magical keys, Josh (Brendan Hines) and Jamie (Liyuo Abere). “They came out of a few things,” Averill explained. “We wanted Nina to start moving on from Rendell, and Josh serves as a love interest for her this season, plus we really wanted Bodie to have a friend his age who is as excited to find the keys. But Josh also serves as a reflection of Nina a year prior, moving to a new place and searching obsessively over answers in his grief.” Josh also serves as our connection to the plot of season three and the new main villain, Frederick Gideon (Kevin Durant), a British soldier from the Revolutionary War who was the first to open the Black Door from where the demons come out.

“It came about from wanting to tell a little of that history and the origins of the keys,” Averill tells us. “We felt like that opens up the show and makes it a bit richer to be able to show the audience that this is a centuries-old battle and our present-day Lockes are not the first ones to go up against the demons. We also tie in the Big Bad to Josh as his ancestor, to show how the past is directly influencing the present.” 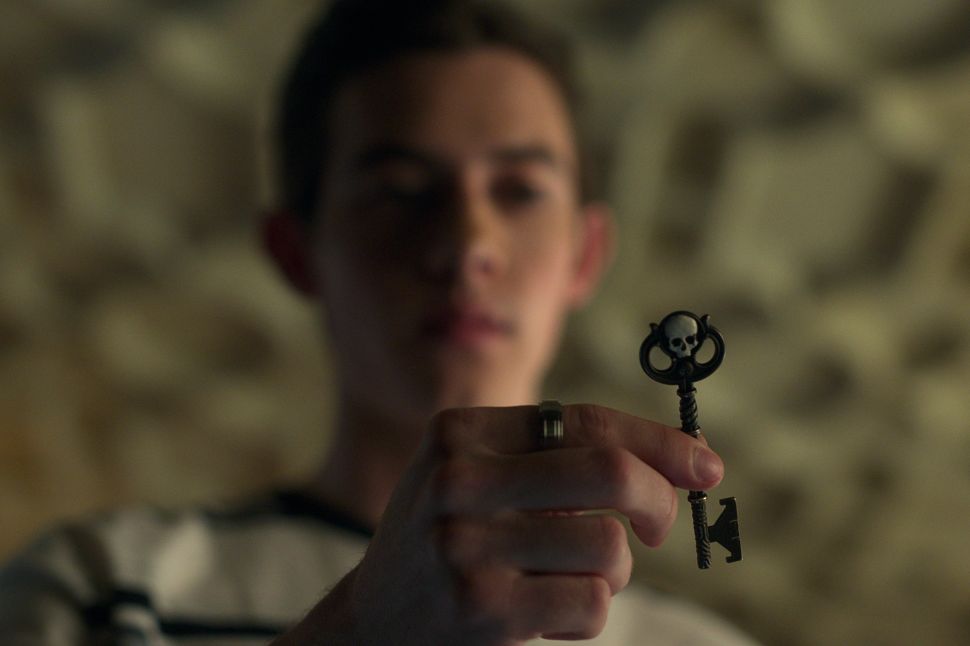