Let the mourning begin.  In No Time to Die, James Bond is dead after 25 installments of the popular series about England’s most glamorous secret agent—which means he will never be back—in his present form.  This is also Daniel Craig’s fifth and final appearance as 007, so enjoy his previously indestructible stoicism for the last time, too.  Do this, I hasten to add, only if you are forever dedicated to a fictional action hero who, in your heart of hearts, can do no wrong.  In my opinion, he ran out of steam long ago, and now in retirement from Her Majesty’s Secret Service, he has no charm, no wit, no sex appeal, no fatal allure for women and he’s losing his hair. He dies from stray bullets, deja vu, stale dialogue and mixed reviews.  The car chases, the fight sequences (there are two), the helicopter shots, the never-ending guns and exploding warheads have all been done before.

This is probably to be expected.  You don’t go to a James Bond movie to learn anything new. You go to ogle the latest girls, gadgets and exotic locations.  The entertainment values are ever apparent, the violence and bloodshed have a certain lift that both defines and defies imagination, and who would have it any other way?  You don’t always remember what you saw the next day, but you know you had some fun.  This time the excitement fades like the popcorn that went with it, and for me, ennui comes on stealthy fingers.  No Time to Die may not be the worst James Bond movie ever made, but it’s in heavy competition as the dullest one since Octopussy.  The film’s sole distinction is the fact that it’s the James Bond epic that finally manages to make 007 a crashing bore.

Directed with more boyish slobber than narrative coherence by Cary Joji Fukunaga from an over-crammed, self-consciously contrived script by no fewer than five writers,  No Time to Die hops and stumbles all over the place, but you can still write the plot on the head of a carpet tack.  It opens with a flashback to the Italian Alps where a mysterious thug in a white mask plods through the snow to murder a young Madeleine Swann’s mother, but young Madeleine narrowly escapes.  Cut to the character, all grown up as Léa Seydoux, who may or may not be married to a gooey-eyed, lovesick 007. (The movie is very vague about things that matter.)  After some high-speed racing through the mountains in his bulletproof Aston Martin, the two lovers are set upon by agents from the evil crime syndicate SPECTRE in the town square and he dumps Madeleine, thinking she betrayed him.  It’s the end for Bond and Madeleine, but the movie is just beginning.  It helps to know your Ian Fleming history, including Bond’s relationship with Vesper Lynd in Casino Royale, as well as the meaning of SPECTRE (you got me there).  Cut to Bond trying desperately trying to enjoy his retirement in Jamaica only to reluctantly join forces with his old pal, CIA agent Felix Leiter (Jeffrey Wright) to return to action in order to stop the criminal manufacture of some kind of inexplicable poison called “nanobots” that are injected into the bloodstream to kill the victim’s DNA, and which can spread like the COVID-19 virus and eventually destroy the world.

Soon the screen is overpopulated with tertiary characters, including Leiter’s pal Ash (Billy Magnussen) who turns out to be a double agent, kidnapped M16 scientist Valdo Obruchev (David Dencik) who invented the nanobots, a new agent named Nomi (Lashana Lynch) who has been assigned Bond’s old 007 code number, and a sexy M16 agent named Paloma (Ana de Armas) who spends her time between shootouts searching for the perfect black cocktail dress. Then there’s the great, wasted Christoph Waltz, doing his Silence of the Lambs ripoff in a padded cell in London, and master fiend Lyutsifer Safin, played obnoxiously by Rami Malek, who won an Oscar for Bohemian Rhapsody for reasons I still find baffling.  He could give lessons in hysterical overacting to Lou Costello.

Cut to an island off the coast of Japan, where Safin controls the nanobots from a Nazi bunker left over from World War II and stages an elaborate third-act battle that ends Daniel Craig’s 007 tenure with bloody knuckles and a bomb that destroys  a landscape the size of Rhode Island.  Madeleine shows up with a daughter of her own, who she declares to be James Bond’s daughter, but nothing in the movie makes any sense, so after 165 minutes of gibberish, why start asking questions now?  Something special vanished when they killed off M and Judi Dench exited with her (M is now Ralph Fiennes, who has learned to mumble) and to my eye Daniel Craig has never replaced the one and only Sean Connery.  Still, I think he deserves a better farewell party than this.  No Time to Die is more of a send-up than a send-off. 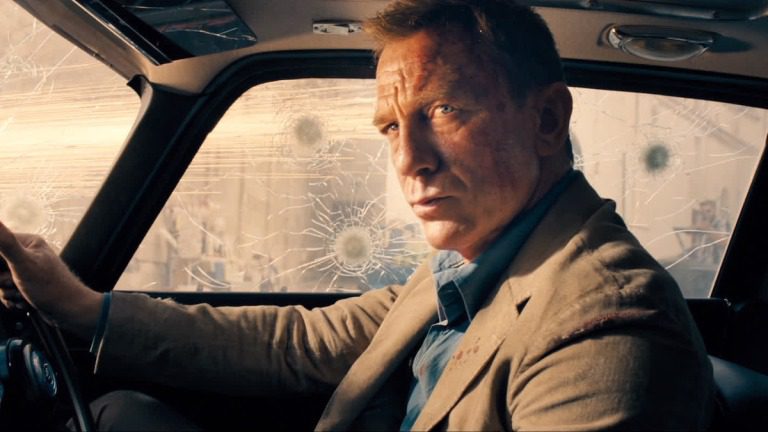