The Royal Swedish Academy of Sciences announced early Wednesday that this year’s Nobel Prize in Chemistry has been jointly awarded to German chemist Benjamin List and Scottish-American chemist David MacMillan. But perhaps due to time differences, the Nobel committee had a bit of difficulty delivering the news right away to one of the laureates, MacMillan, who was in New Jersey at the time of the announcement.

“We have not been able to reach Dr. MacMillan yet,” the Academy’s Secretary General Göran K. Hansson told reporters during a press conference in Stockholm at noon local time, which was 6 a.m. on the east coast.

“I have over the years called 52 Nobel laureates. But my 53rd (MacMillan) I had to inform through an email and a recorded message on his cell phone,” he said. “I hope he’ll call me back after the press conference.”

Luckily, Hansson was able to get ahold of the other winner, List, who was on vacation with his family in Amsterdam when the Nobel committee called. He even called in to the press conference from Holland and answered a few questions from reporters.

The Nobel committee notifies winners every year by the good old method of a phone call.

“Chemists! Make sure your phones are charged,” the Royal Swedish Academy of Sciences posted on its Twitter page early Wednesday morning ahead of the big announcement. “Secretary General Göran K. Hansson is going to make a very important call today.”

It appeared that MacMillan finally learned the news a few hours later. The twitter account of Princeton University, where MacMillan currently works, posted a short video at around 9 a.m. showing him enthusiastically greeting students and colleagues on campus.

It’s not just another day at the lab.

Professor MacMillan is enthusiastically greeted by students and colleagues after learning he’s won the #NobelPrize in chemistry. pic.twitter.com/wwgjUhrfGg

List and MacMillan won this year’s Nobel Prize in Chemistry for their work on the development of asymmetric organocatalysis, “an ingenious tool for building molecules” that has had a great impact on pharmaceutical research and made chemistry greener, the Nobel Committee for Chemistry said in the announcement.

The prize committee ran into a similar issue two days ago when trying to reach the winner of this year’s Nobel Prize in Physiology or Medicine, American biologist Ardem Patapoutian, who lives in California.

In an interview published on Wednesday on the Nobel Prize website, Patapoutian said he missed the committee’s initial calls because his phone was in “do not disturb” mode. The committee then somehow got ahold of his 92-year-old father, who lives in Los Angeles. “He called me. And so I heard it from him, which was very special,” Patapoutian said. 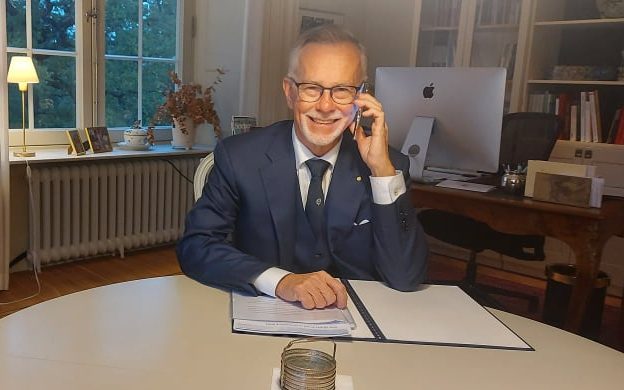