Pedro Almodovar’s latest women on the verge of a nervous breakdown are the Parallel Mothers, which brought the 59th New York Film Festival to a close over the weekend. Spain’s famed writer-director and his two title players—Penelope Cruz and Milena Smit—were on hand for the closing-night festivities at Alice Tully Hall and the press conference that preceded it.

Parallel Mothers is being touted as Almodovar’s best since his 1999 Oscar-winner, All About My Mother. Although it billows with Almodovar’s usual soap-opera suds, it begins and ends where no movie of his has gone before.

Cruz, who qualifies as the director’s most frequent collaborator after eight films together, and Smit, whom he just discovered via Instagram, meet as maternity-ward roommates in Madrid. Cruz plays a 40-year-old magazine photographer carrying the child of a married man, Smit a teenager who’s been coerced into group sex. They’re generations apart, but united in their determination to be mothers without any assistance from men. They go through labor pains simultaneously, deliver daughters and develop a bond of friendship.

Almodovar churns up some pretty choppy seas for these women to negotiate. When Smit loses her daughter to crib death, Cruz brings the mourning teen into her home as an au pair for her daughter—then learns, through a biological test, that the surviving daughter is actually Smit’s.

Parallel Mothers was made in and around Madrid in a month last spring, but the film had a 22-year gestation period. “The first time he shared with me something about this story, we were here in New York, doing press for All About My Mother,” Cruz recalled. “That was the root of the story.”

Fast-forward a few decades to the second time they discussed the story: 2020, when they were in total lockdown and confined in Madrid. “We did one of our calls, Facetime, and he told me, ‘Oh, by the way, I took that story out of the drawer, and I’m writing it again, and I’m thinking about you for the character.’ Imagine that during the lockdown! We didn’t know what the future was or what kind of future. We knew nothing, and then he gave me this injection of hope and excitement, knowing that I would be the plan, in the horizon for us to do this wonderful story together.”

Almodovar kept himself occupied through the pandemic, turning out two films: last year’s The Human Voice with Tilda Swinton, and now Parallel Mothers. Work was his way of coping with traumatic times.

“In general, for me, to make a movie is always a kind of running away from my life,” he confessed. “It always drives me to another reality where I feel much better than in my own life. When I’m working—when I’m writing or shooting—I feel much freer than in my real life. In the reality that you live day to day, I’m not so courageous or daring as when I write. I’m more like a coward. The moment when I feel completely free is when I’m writing. There are no limits on me.”

This self-assessment jibes with the Almodovar that Cruz knows. “He’s writing all the time,” she insisted. “Even when we’re traveling, promoting one film, he’s writing three scripts at the same time. I don’t know how he does it, but he’s been like that as long as I’ve known him. I can tell when we’re shooting and when we are not by his mood. When we are shooting, I think he is happier. Writing, shooting, preproduction, postproduction, traveling around the world with a movie, I feel that he’s happier in those processes. I understand that because I identify with that.”

The script for Parallel Mothers has, to Cruz’s mind, “a hypnotic effect. You’re there. It keeps you so present and so there that you don’t want to lose anything, and there are many details. It is a movie that, if you watch it two or three times, you will always discover something new.” That’s because Almodovar’s characters were so deeply, complexly layered.  “When you think one thing is soft, a bigger problem comes into her life. It’s constantly like that until the end. That was a beautiful challenge to have in my hands, and I’m grateful he once again imagined me doing something that he didn’t do before. He’s done that with me constantly in my career. He imagined that I could do something that I never did with him or with another director.”

Cruz entered Almodovar’s consciousness 30 years ago when he saw her first movie, Jamon, Jamon. “She acted in a completely personal way,” he said. “Everything was truth and original. When I left the theater, I thought, ‘This is the actress I’d like to work with.’”

Five years later, it came to pass when he cast her in Live Flesh. The leading man, Javier Bardem, is now her husband. They are one of the few screen couples who each have an Oscar on the mantlepiece (she for Vicky Cristina Barcelona, he for No Country for Old Men).

Working with Almodovar launched Cruz’s Hollywood career. Although her role in Live Fresh lasted only eight minutes, director Stephen Frears saw it and introduced her to U.S. audiences in The Hi-Lo Country.

A similar fate awaits Smit, Almodovar felt certain. “For me, it’s like being witness to the birth of someone that is going to be a big star. I’m sure that the future of Milena will be wonderful, that she is going to make many movies—and many different types of movies. She’s very versatile.”

A minimal male presence in an Almodovar movie is nothing new, but in Parallel Mothers it has special significance. In his screenplay, he created a line that connected Cruz’s character with one of the darkest chapters of Spanish history. “The link I created,” the director explained, “comes through her grandmother, who raised her and told her how her great-grandfather was killed and has left this legacy—this desire to find his body and exhume his grave. I really wanted to talk about the mass graves—in this particular case, the truth about them that the character is seeking, which, of course, goes in contradiction to the way she’s handling truth in her own life. Thus, this axis, this contradiction, is something that the character needs to come to terms with.”

Her great-grandfather was among the 100,000 citizens who went “missing” during the Spanish Civil War, murdered early on in Franco’s “White Terror” and buried in a meadow outside the village. Locals come out for the excavation to view the old bones, some with hands tied behind the back with barbed wire. It’s such a moving scene you wonder how you got there.

According to Almodovar, Spain is the second country after Samaria that has the most missing people. He placed the figure at 140,000, and, until this situation is satisfactorily resolved, “I think that the Civil War is not ended. We need to do that to close that awful period of our history.” 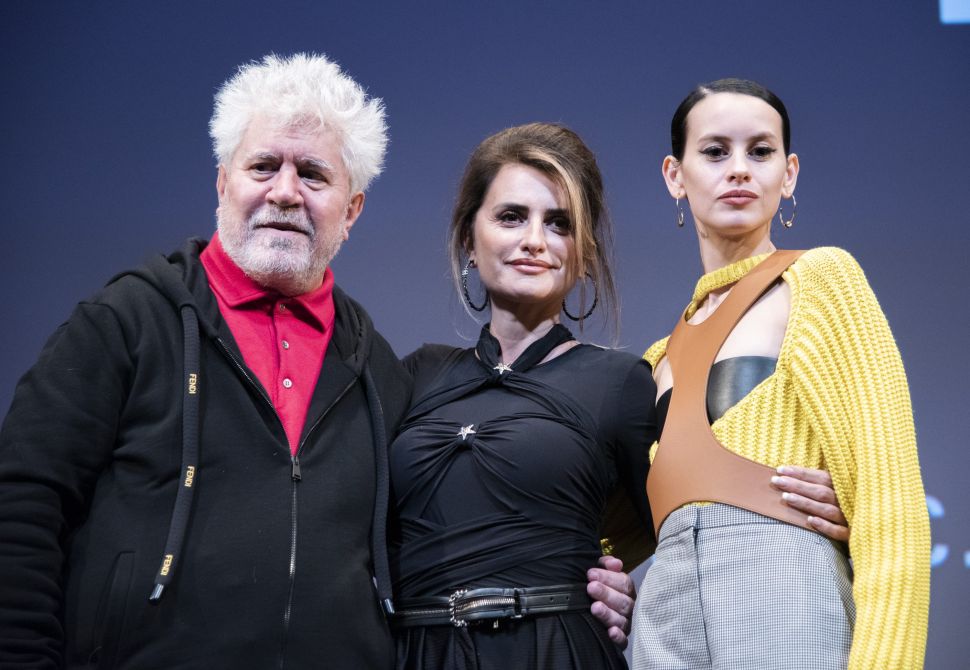