After stunning audiences with Tangerine, an authentic iPhone opus about Los Angeles’ transgender sex workers, and with The Florida Project, a hard-hitting Orlando motel drama led by a six-year-old, Sean Baker returns to boutique studio A24 with Red Rocket, a Texas-set comedy that unfolds at a similar nexus of American poverty and American hustle. It isn’t as exciting or emotionally exacting as those aforementioned films—in part, because it isn’t trying to be—though it does leave a lingering sense that it could have, and perhaps should have, dug a little deeper into its setting. That said, Baker’s latest is hardly a bore or a wasted effort, and it’s bolstered by a hilarious, self-reflexive performance by Simon Rex of Scary Movie fame, who plays a manipulative, washed-up porn star trying to get his life together and failing to get out of his own way.

Before its hoodwinks and hijinks begin, the film opens with the sounds of N’Sync’s “Bye Bye Bye” scoring dreary images of a battered and bruised Mikey Saber (Rex), en route to his dilapidated neighborhood in Texas City, Texas after decades away. Where some filmmakers might use the boyband hit only as a nostalgic throwback, Baker turns it into a strangely poetic motif that returns in several iterations, from a taunt hurled in Saber’s direction, to a thoughtful reprieve (whose poignancy Saber can’t quite grasp), to a twisted exclamation point. Its appearance in the first scene not only offers a humorous contrast—the film’s toe-tapping, propulsive soundscape feels wildly disconnected from its exhausted protagonist—but also sets a very particular tone, since the track might immediately bring viewers of a certain age back to the turn of the century. The film, while not set in the year 2000, unfolds at a similar precipice of American change with major domestic and global ramifications: the buildup to the 2016 election.

News items about Hillary Clinton and Donald Trump play constantly on TV screens, though no character in the film seems actively concerned with the outcome. This ever-present backdrop rarely amounts to much, beyond the vague and somewhat uninspired connection between Saber and Trump as seedy Hollywood conmen. However, everyone in the film is too caught up in their own leg of a pitiless rat race for this lack of cohesive politics to matter—from Saber, whose career and reputation in L.A. have crumbled, to his estranged wife and former scene partner Lexi (Bree Elrod), who begrudgingly lets him move back in, and Lexi’s no-nonsense mother Lil (Brenda Deiss), who demands he pay rent, despite his porn star status making it difficult for him to find work. Saber is both a victim of his own stardom, and a victim of expectations and systems that fail to catch people when they fall. But he also revels in his own ego, and he knows full well that his doe eyes, his alluring smile and his gorgeously chiseled physique can help him get by. Before long, he finds a potential path to spiritual salvation, in the form of a local 17-year-old donut shop cashier named Strawberry (Suzanna Son), with whom he falls head-over-heels.

Saber is, at once, a sympathetic charmer down on his luck, and a middle-aged narcissist whose actions border on (and sometimes, cross all the way into) predation. It’s a delicate balancing act, though one that Rex and Baker walk carefully together; the former breathes life into a uniquely challenging role that mixes sincerity with insecurity, while the latter crafts a piece that observes and explores every facet of that performance, no matter how many goofy layers conceal its nuances. Red Rocket isn’t the kind of work that condemns or implores—not explicitly, at least—but Rex lays everything on the table, from Saber’s basest desire to his most complicated self-delusions, while Baker (who also serves as the film’s editor) refuses to let punchlines have the final word. What Saber says and how he says it often elicits chuckles, but the real laughs come from the aftertaste Rex provides, with looks and glances that search for reinforcement of his grandiose façade.

Rex, though known mostly for lowbrow studio comedies, was himself a former adult film actor, but the role’s self-reflexiveness is born from his very presence, as a guy who has a distinctly “Hollywood” look but has never quite made it as a leading man. He imbues the lively Saber with a certain melancholy, and his rapid-fire delivery seems tethered to the character’s desperate need to beat some imaginary ticking clock. He clashes wildly with his surroundings when he returns to Texas City, between his tanned complexion and his Californian intonations; he claims to have “lost” his Southern drawl, a phrase which is usually code for moving away from a less “desirable” accent, and towards something more acceptable or mainstream. One gets the sense that he resents the downtrodden people and places he now finds himself among—like his neighbor Lonnie (Ethan Darbone), with whom he forces friendly conversation in exchange for rides downtown to deal drugs—and he refuses to let himself become a Texan once again, despite relying on Southern hospitality.

Of course, things aren’t always rosy at home. Saber and Lexi have an unquestionably unhealthy (though consistently riveting) tension between them, which neither character can fully put into words, and so it often explodes in moments of simultaneous hilarity and harrowing drama, allowing both Rex and Elrod to shine. The performances are fantastic across the board, and each one deepens considerably as the film peels back its layers. Baker has been accused, on occasion, of creating poverty porn, though he appears to take a self-aware approach to that criticism here. When Red Rocket begins, its characters and settings are painted in broad strokes and poor Southern stereotypes, but the more the film spends time with the likes of Lexi, Lil and Saber’s drug-dealing associates, the mother-daughter duo Leondria and June (a pair of fascinating performances from Judy Hill and Brittany Rodriguez, who speak volumes with their silences, but cut just as deeply with their words), the more it becomes clear that this gawking camera and its hyperactive whips and zooms are an extension of Saber himself and the impatient way he sees the world.

After a while, the film subtly takes a step back from this narrative POV. The shots hold more still, and Saber is no longer the prime focus of every scene—when he finally leaves the frame for an extended period, his absence is palpable—allowing the supporting cast to inject each quirk and eccentricity with a simple sense of longing that rounds out their characters. Beyond a certain point, each person has a more immediate warmth than Saber seems capable of, even though the story rests on his ceaseless charm.

Saber’s unwavering schemes—and their unintentional, unpredictable domino effects—are the film’s main focus, and while the emotional journey of each secondary character feels worthy of exploration, everything ends up playing second fiddle to Simon Rex’s chaotic energy. Your mileage may vary (and it may be calibrated according to how moving or incisive you found Baker’s previous work), but while Red Rocket’s farcical flair might be emotionally distancing, it also allows for a more madcap and more preposterous explosion of ego. It wouldn’t quite feel like the same film, with the same bleak perspective on the corrosive side of the American dream, if it amounted to something meaningful. 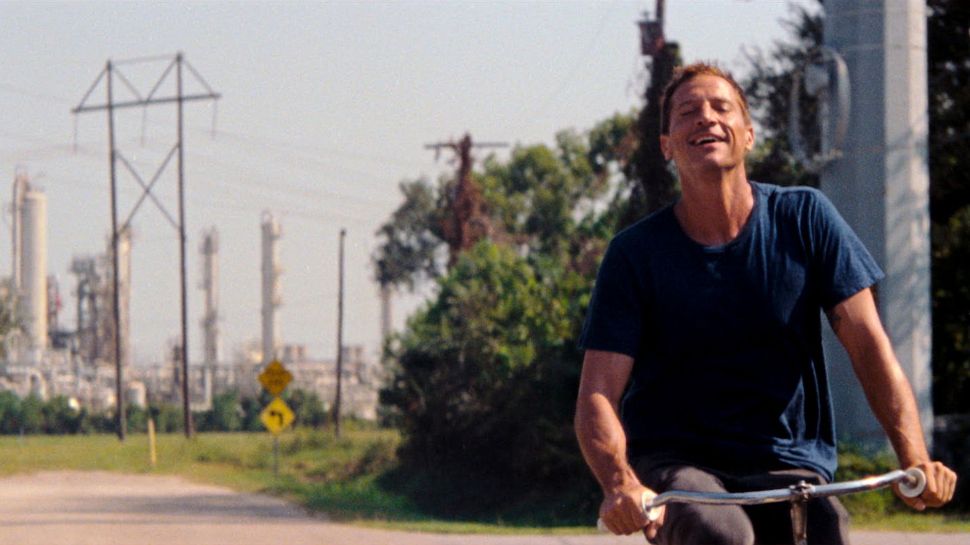