It is no great act of critical acumen to say that the body lies near to the heart of contemporary painting. Figuration reigns, and with its rule has come a host of corporeal-conceptual concerns. Personal identity, for one thing: the painted body as a political unit, as forward guard of visibility and representation. Sensuality, too, the tactile spark of skin-on-skin that is so often vacuumed out from the media of modernity. The figurative reign has also brought out an emergent counterinsurgency, one ready to dismiss the style du jour as a braindead, zombie thing, as was done with the abstraction that ruled before it. The critical grievances careen between valid and overblown: a tendency toward myopic self-focus, an immediacy that verges on obviousness, and an over-reliance on Surrealism and the bulbous phantasms of Peter Saul have all been floated as critiques of this era of representational art.

Sarah Slappey, in her focus on the body, manages to sidestep most of these tendencies. In her depersonalized thickets of skin, there is no room for obsessive self-branding or didactic political will. Descriptions of a Slappey canvas tend to fall into a babble of free-associative anatomy: a root network of interwoven limbs, a non-euclidean zone of liquid thighs and sea-urchin hands and breasts that look like cowboy boots. Feminine, sure, but with one foot in the eldritch. The conceptual underpinnings of her work similarly manage to snake around easy categorization— are they celebratory or scary, empowering or objectifying— and in this way her practice has operated as a refreshing trap-door out of the reflexive echo chamber of contemporary figuration. In her recent show, “Self Care,”  at Sargent’s Daughters, Slappey distilled her corporeal contortions even further, in the process forging new ground for our era’s bodily obsession.

“Self Care” found Slappey stripping away the sexuality that simmered beneath her previous works, operating instead in a grammar of appendages and blood. Gone are the long drips of lactation that oozed through paintings like Pearl Drip (2020), replaced instead by close-cropped views of ankles, wrists, calves, and thighs that run with thin rivulets of blood. In an interview last year, Slappey expounded on her love of horror movies, and that aesthetic referent is deeply felt in “Self Care.” Soap-drenched showers, corded phones, veins primed for piercing— the settings and props of archetypal slashers crop up often in these compositions, as does the titillating gaze of a camera searching for bare flesh and bright red blood. Bondage is everywhere, from ropes to cords to sinister snaking trails of soap. These limbs are stuck: at home, in routines, in clasping embraces with one another.

Perhaps it’s isolation that fueled this shift in subject matter, perhaps something else. Tracing pandemic influence is a game I’ve grown tired of; what matters to my eyes is Slappey’s continued burrow into the depths of depersonalization. Even as the various hands and feet in “Self Care” seem possessed of an internal life, gesticulating playfully despite their various stigmata, there is less of a sense than ever that there is a person outside the frame to which these appendages belong. They seem to be objects unto themselves, like the pearls and twine that garland them throughout.

Later in the same interview from last year, Slappey discusses her disregard for backgrounds in painting, saying that she finds them to be “visual junk” that distracts from the bodies she likes to squish into the foreground of the picture plane. The works in “Self Care” present some of the busiest backgrounds of the artist’s recent oeuvre, speckled with mud or decked out in the gridded geometry of shower tiles and gingham. The effect, though, is not distraction, but quite the opposite, the backgrounds serving to heighten the strangeness of Slappey’s central subjects. How different, after all, are these intertwined appendages from the patterns that they float over?

This is the central trick of “Self Care:” turning figuration inside out. The body is alive and bleeding and yet it is also an object of compositional architecture. The limbs in their grasping resemble all-over gestures; they call attention to the field they float over like dirigibles. These paintings are not obvious, they do not revel in the confines of the self. They subvert figuration’s privileging of the human form as ultimate subject, deconstructing bodies into disparate parts and reconstituting them into writhing pieces of painterly rigor. In this way, “Self Care” represents an exciting outcropping among contemporary painters of flesh, insisting that the corpus can be used in so many more ways. 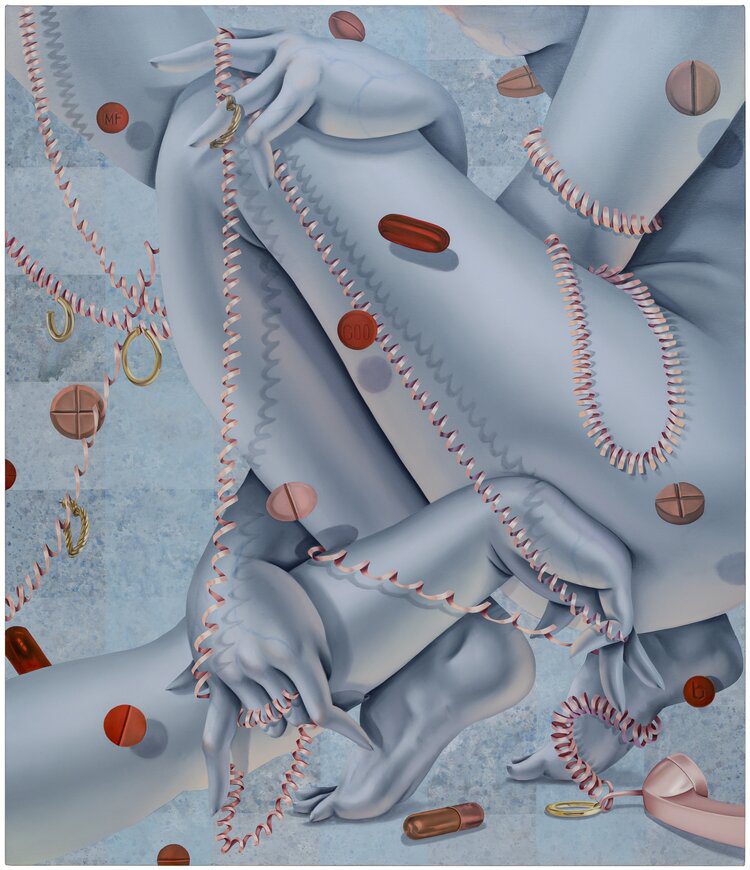