Given the idiosyncratic output of Wes Anderson, it’s no surprise that The French Dispatch, a picture he made pre-pandemic, got an idiosyncratic launch at the 59th New York Film Festival.

It was a split-level sort of thing, with stars coming out in installments. After the festival screening, five of them—Lois Smith, Bob Balaban, Léa Seydoux, Jeffrey Wright and Anjelica Fellini—and NYFF Director Eugene Hernandez took to the stage of Alice Tully Hall. Then they were joined—in the virtual manner that has become commonplace these days—by Anderson, producer Jeremy Dawson and four more stars: Bill Murray, Adrien Brody, Steve Park and Jason Schwartzman.

The pandemic was not the reason for the virtual call. “I’m sorry we couldn’t be there,” the director announced via Zoom. “I would never miss the New York Film Festival for any reason—except for shooting a movie.” Which, indeed, was the case.

Anderson has moved on to another movie and another country since The French Dispatch. In fact, it was two in the morning in Chinchon, Spain, a town southeast of Madrid where an “Untitled Wes Anderson Film” is now in production. “We’re right in the middle of shooting,” Anderson explained. “[Zoom] is the best that we can do.”

Hernandez went to Bill Murray first for a progress report. “Tonight was barbeque night,” the actor blustered forth, hunting for the funny. “As you can imagine, the people of Spain love their ham. We ate together at a big long table, about 45 people at a time, and the night’s been very good. There have been no incidents, no police action, no military coming to town. It’s been pretty quiet. And I think we’re making a very good movie—a lot better than the piece of junk you just saw.”

Anderson giggled and grimaced simultaneously and rushed in to do some repair work. The French Dispatch is his funny valentine not only to French cinema but to literary journalism, the kind that was practiced and perfected in The New Yorker. “For years, I’ve spent at least half of my time in France,” he began. “I’ve been waiting to make sort of a French movie. I wanted to use what I’ve been experiencing for years as an American living abroad. And then I had this idea about doing an anthology that was based around this magazine.”

Most of the characters in the picture are based on well-known literary types who swam in that heady pool of knowledge decades ago. The closing credits name names, gobs of them, in a long and loving dedication.

Murray, who has been in nine out of the ten Anderson films, plays a case in point—a hard-nosed editor who left his native Kansas to form a smart magazine in France staffed by gifted expatriate writers. The name here is Arthur Howitzer Jr. (a.k.a. Harold Ross, co-founder of The New Yorker).

There’s no overriding story arc to The French Dispatch. What plot there is comes at you in five different episodes, like magazine articles: an obituary, a travel column and three feature pieces.

“We did approach it not as one experience but as short stories,” Anderson proffered. “That’s quite a different form, and it has different kinds of interesting surprises along the way. It was fun working that way.”

“It really was,” piped in Schwartzman, who conceived this zany yarn with his cousin, Roman Coppola, Hugo Guinness and Anderson, and who plays a cartoonist in the picture’s paper. “Each part of it that we would work on, we would just forget about the other parts and become very immersed in it.” Hence: the deliriously detailed sense of comedy throughout.

Regardless of their origins, every episode requires a lot of manic running-around in a dull little fictional French town dubbed Ennui-sur-Blasé (translation: Boring-on-Apathy). The real name of the place happens to be Angouleme, and, said Anderson, it was the perfect backlot: “All the ideas we had for how to invent our own French city were based on French movies. We found ways to interpret them in this town. We used half the population of the place in the course of the film. It became a character.”

Brody plays art dealer Julien Cadazio, a fictional facsimile of Lord Duveen, who sold a lot of European art to a lot of wealthy Americans. Brody, who’d obviously done his homework, epxlained: “Duveen essentially created much of the art world, and created collectors in a sense, because he managed to inspire some of the great industrialists and incredibly wealthy people to have the preeminent art collection and to have works that ended up in museums.”

One of those Duveen-created art collectors, Upshur “Maw” Clampette, is played by one of the new Tony winners in town, 90-year-old Lois Smith. The character and the actress are both from Kansas, but that didn’t make Smith’s job any easier. “Kansas is where it began and ended as a real connection,” she allowed. “Wes spoke to me about the hillbilly talk, and he sorta realized that they didn’t talk hillbilly in Kansas, but”—she gave a resigned laugh here—“that was no barrier.”

Roebuck Wright, the food journalist that Jeffrey Wright elegantly portrays, has James Baldwin and A.J. Liebling for reference points. “The influence was pretty heavy,” the actor admitted. “I was trying to justify who this guy was, so Baldwin was a great window on to that in terms of his being an expat in France at the time. I wanted to understand how it was that this man—Black man, gay man, American—winds up there so Baldwin was really the justification for that. He’s not James Baldwin. He’s a Frankenstein mix of him and A.J. Liebling, which is really where a lot of the language around food comes from and the irony around the language, which I was drawn to. I just fell in love with the language of this story and the beauty of it, and the poetry and the music. It was like a song I couldn’t get out of my head once I heard it on the radio. It just stayed with me.

“Wes talked a little bit about Tennessee Williams as well so there’s a half a teaspoon of Tennessee Williams in there somewhere. I forgot to put a whole handful in. I was trying to use these nonfiction references to make a fictional Frankenstein version of something that really has nothing to do with them in whole but only in parts.”

Like almost all the actors assembled here for the Q&A, Bob Balaban is a chronic Wes Anderson repeater. Asked what makes him keep going back for more, he replied, “The fear that if you don’t keep coming back, you won’t get asked again.” After he got his laugh, he walked that back a bit. “That was the silly answer,” he said. “The real answer is that it’s a joy to be around this man.”

Halfway through the interviews, cocktails arrived in the hotel suite of the Chinchon contingent. Everybody quickly broke with formality and helped themselves to their drink of choice. Explained Anderson: “I specifically asked that no one drink before the Q&A but that we should have drinks during the Q&A.” Wright, among the Alice Tully teetotalers, thought that was a “good decision.”

After the clinking of glasses and the “Cheers,” Murray got in a bawdy toast. He even abbreviated it. Hoisting his glass, he said to the camera: “NYFF, MF.” Again, Anderson giggled and grimaced. 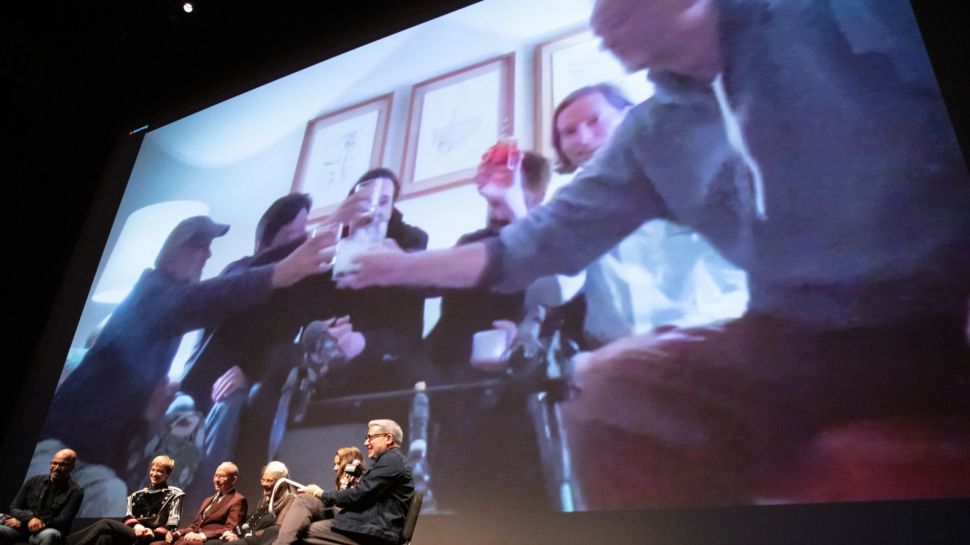