I was all set to review Six when Broadway went dark on March 12, 2020. It’s been frustrating to sit on my opinion. To be sure, there was more to worry about than whatever the hell I thought of this bouncy London import in which Henry VIII’s half-dozen ex-wives sing their fates in pop songs. Okay, I’ve had 19 months to refine my critical estimation, which is: Uh…it’s kinda fun?

Any show that opens on Broadway or Off after the interminable winter of our discontent should be celebrated. One as clever and well-executed as Six deserves extra praise for taking a risk in this friendly but fragile ecosystem. An 80-minute song cycle with jokes about the Tudor court and an English king’s split from the Pope: not an easy sell. However, Six — which released a workout-perfect studio album in 2018 — isn’t just a new title fighting for a market niche. It comes with a built-in fandom that knows the nine tracks by heart. That makes it both easier and harder to appreciate as a musical.

But let’s not get ahead of ourselves — or ahead of Anne Boleyn. I assume you got that one. Anne (Andrea Macasaet) makes several humblebrags about her notorious decapitation after falling from favor with Henry, arguing that she suffered the most of all his exes. The dramatic conceit of the show is that the ladies are competing for most grievously abused.

I don’t claim familiarity with every juicy fact in Six (still working my way through Hilary Mantel’s The Mirror and the Light). Did I know how German-born Anna of Cleves (Brittney Mack) became estranged from Henry’s large bosom? It involved a painting by Hans Holbein. Nor had I heard of Thomas Culpeper, the courtier who fatally consorted with Katherine Howard, Henry’s fifth spouse. So, courtly bow to the clever-boots power duo of Toby Marlow and Lucy Moss (book, music, lyrics) for making the History Channel slap and also writing wall-to-wall bangers for our deposed divas in the style of Britney Spears, Nicki Minaj, Alicia Keys, and others (not according to my niece, whom I certainly did not consult).

Six is not the first Broadway musical to marry pop to Renaissance optics: Something Rotten! and Head Over Heels filled the micro-genre with giddy aplomb. Fifteen years ago, Spring Awakening proved that rocking out over ancient social injustice creates a frisson. In Six, each Queen narrates her particular trip through the misogynist meat grinder of 16th-century England. The script’s first lines—a mnemonic for U.K. schoolchildren—summarizes their ends: “Divorced. Beheaded. Died. Divorced. Beheaded. Survived.” So there’s a happy ending. Kind of.

Besides the aforementioned Anne/Anna, we hear from haughty French princess Catherine of Aragon (Adrianna Hicks), who got off relatively easy with separation; simpering, loyal Jane Seymour (Abby Mueller), who perished after giving birth; party-girl Katherine Howard (Samantha Pauly), accused of whoring and, like Boleyn, sent to the axman; and finally, poised, self-respecting Catherine Parr (Anna Uzele), Henry’s final wife and caregiver until his bloated, gouty, paranoid death. (Impressively, given the monarch’s well-documented obesity, there is zero fat-shaming in the lyrics.)

There’s no plot to Six, just an agreement among the ex-wives to compete (in song) for who had the hardest time. Toward the end, in a meta twist, the women realize that by reveling in their humiliation and suffering, they’re playing into the patriarchal ideology of defining women by their attachment to men: an epic Bechdel fail. Banding together, literally, the women harmonize their way into a space of sisterhood and empowerment: “I don’t need your love, no, no / It’s time to rise above, woah, woah / We don’t need your love / Cos we’re so much more than.” After all we’ve been through with a pandemic and return to life, the empowerment theme is quite bracing.

Due to more than a 100 million streams of the London cast album, Six also commands a readymade, baked-in fandom. When I attended (last year and now), the audience went crazy, as if the thing were already a long-running hit. It was a similar phenomenon to Be More Chill, another show made famous by fan sharing — except that Six has actual wit and substance.

However, I worry about this sort of viral pre-approved work: it replaces the spontaneous discovery of new material with performative stanning. Like Hamilton (the obvious model for Six), the score is dense with data and in-jokes, which hardly anyone could catch on the first listen. Lin-Manuel Miranda does a better job dramatizing his material and guiding an audience through its nuances with sophisticated storytelling tools. Here, Marlow and Moss’s dramaturgy is extremely rudimentary and the sense of discovery in the lyrics is muted. Is it a bona fide musical or just a Renaissance Faire rock concert?

I guess it’s both, and highly enjoyable on its own merits: snarky yet heartfelt, slickly packaged, blessedly brief. Check it out, especially if your taste Venn diagrams over Tudor history, camp feminism, and Ariana Grande. History tends to be a record of institutional inhumanity: sociopathic dictators, victimized women, wars, and plagues. It all lands on the ash heap of history — if we’re lucky, set to a dope beat. 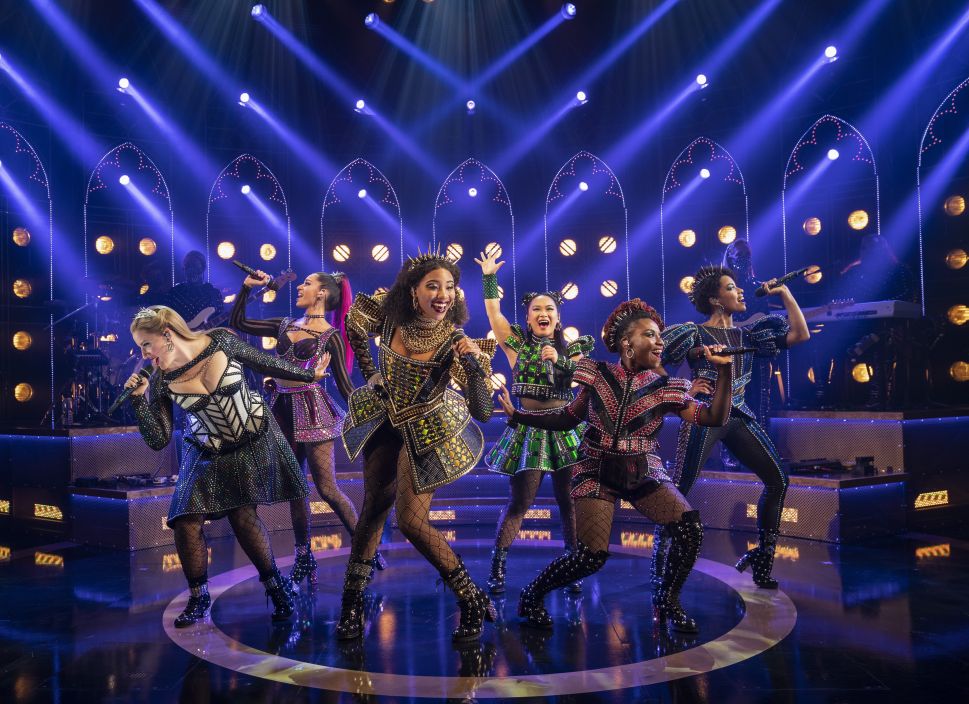