When Tony Kushner and Jeanine Tesori’s Caroline, or Change opened at the Public Theater in December 2003, later moving to Broadway for a paltry four-month run, we weren’t worthy of it. In 1963 Louisiana, an embittered Black maid’s ambivalent relationship with her employer’s child is poisoned by money. Reviews were mixed, audiences thin. Ticket buyers shied from a multilayered morality tale about broken, grieving people divided by race and class, triggered by charity, who prized resentment over empathy. Today, thanks to an outstanding revival starring the majestic Sharon D. Clarke, we’re not just worthy of Caroline, or Change; we are it.

Who knows why anything thrives on Broadway, that louche lottery where cheap work prospers and good work folds (until it’s the other way around). I’m dismayed that Is This A Room and Dana H. will end November 14, but I couldn’t tell you why those dark, hypnotic gems failed to find an audience. Same goes for George C. Wolfe’s vibrant original staging of Caroline, built around the titanic Tonya Pinkins and a solid supporting cast with attractive design. Some of us adored this opera-musical at first sight, even if it was a dense, vertiginous swirl of family drama and metaphysics. It was beautiful. And rigorous. And heartbreaking.

None of those qualities is diminished in Michael Longhurst’s lucid, deeply felt new staging, which started at the Chichester Festival Theatre in 2017 before traveling to London’s West End. The Roundabout Theatre Company has retained Clarke and the UK design team, while surrounding the powerful British performer with American troupers—a good thing, since this strongly regional tale requires cultural sensitivity about Louisiana and East Coast Jews who find themselves relocated to a magnolia-scented, racially segregated backwater, the book reminds us, “sixteen feet below sea level.”

The primary location of the musical is the Lake Charles, Louisiana home of clarinetist Stuart Gellman (John Cariani) and his second wife, Rose (Caissie Levy, nervy and neurotic) who recently moved South with the motherless eight-year-old Noah (Gabriel Amoroso). Rose longs for Noah to bond, but the boy rejects her advances. Rose feels equally distant from the emotionally cauterized Stuart, still mourning his late wife, a bassoonist. (Kushner blended autobiography with invention for the story’s basic elements.) For his maternal fix, Noah gloms on to Caroline, herself a divorced mother of four with zero interest in raising a stranger’s child. The dour, taciturn maid lets Noah light her cigarette (“Don’t suck in!” she cautions gruffly) in the basement laundry room. That ritual and chitchat is the extent of intimacies between them.

Given such a setup, you might expect Caroline, or Change to be a coming-of-age tale set against the backdrop of the Civil Rights era, with a bit of racial tension and an uplifting denouement. But Kushner and the inspired, boundless Tesori constantly subvert expectations. Noah throughout is just a kid, and while he glimpses the murk that lies in adult hearts—and his own—his moral awakening is not the narrative engine, as in To Kill a Mockingbird. And the struggle for equal rights remains in the background, save for a glowering Confederate statue that goes missing from the town square one day. Happy ending? This musical is ultimately a tragedy, a clear-eyed look at the psychic toll of living in a society that, like laundry, separates the whites and the colors, where some live above and others toil below.

Noah sloppily leaves coins in his pants, which Caroline removes before washing. Rose notices and, irritated, informs Noah that any spare change the maid finds, she can keep. The boy responds by intentionally leaving money in his pockets, then vividly fantasizes about Caroline taking the spoils to her jubilant four kids, and even joining them in play. Caroline, after much struggle and disdain, finally brings home the surplus booty. Then Noah gets a $20 bill as a Chanukah present. As said, this is a tragedy; it won’t end well.

Kushner’s book is not your typical blueprint of dialogue scenes breaking into foursquare rhyming blocks. Instead it’s more like an opera libretto, a richly imagined verse drama that assigns narration to various anthropomorphized objects in Caroline’s working day in the desolate basement: a bubbly Washing Machine (Arica Jackson), an erotically steamy Dryer (Kevin S. McAllister), and a brassy radio (Nasia Thomas, Nya, and Harper Miles, channeling the Supremes) for Caroline’s distraction. A Moon (N’Kenge) later glides across the sky, singing angelically of its phases, and a bass-baritone Bus (McAllister again) dolefully rumbles up with news of JFK’s assassination. The language is sometimes banal and blunt, sometimes vaulting into punning, cosmic contemplation of geography, history, and the moral swamps in which characters wade or drown.

Matching the polymathic dazzle of the text is Tesori’s unique, shimmering score. A juicy blend of R&B, gutbucket blues, klezmer, and anthemic show tune, it’s a score to get lost in, packed with grooves and hooks that it giddily strews like diamonds. Tesori doesn’t hoard motivic brilliance—though she returns to poignant passages, like the achingly wistful theme for Dotty (Tamika Lawrence), Caroline’s fellow maid, who worries about her friend’s descent into depression. A composer whose technical skill and emotional acuity are equally matched, Tesori (Fun Home, Soft Power) is amassing a body of work whose theatrical richness and depth we will be counting for years.

There’s so much to cherish in this miracle of a musical, its puzzle-box structure, thematic patterning, and — you’re not ready —its shocking release with the eleventh-hour number, “Lot’s Wife.” In this a self-crucifixion of a solo, Caroline scours her bleeding soul with a poultice of anger, guilt, and Biblical despair. “Murder me God, down in that basement,” Caroline begs, and you’re pierced to the core by the heroine’s sheer desperation. Clarke, expression hard, flat and cold as an unused iron, is a force of nature, as we critics lazily praise—but which force? Is she a hurricane of proletarian discontent, a sinkhole of battered wifedom, an earthquake of feminine rage, or a wildfire of Black righteousness? Take your pick.

I’m not actually 100% sure we are worthy of this show, but we need its complexity and density. Although the creative team is white, they have fashioned a character of color whose radical humanity shatters you—Caroline is a strong, weak, dignified yet self-doubting pillar of flesh and blood, not a saintly sufferer or magical soother of white guilt. And Noah isn’t a bad kid, but his white saviorism is exposed for what it is: naïve exuberance borne of privilege. There are no villains in Caroline, or Change, only historical forces and social relations we condone. Wait, I was wrong; there are villains. You can hear them clinking in the bleach cup after Caroline wearily scrapes them from Noah’s pockets. Collect enough of these bits of nickel and copper and you can melt them down to make, say, a Confederate statue or a washing machine. 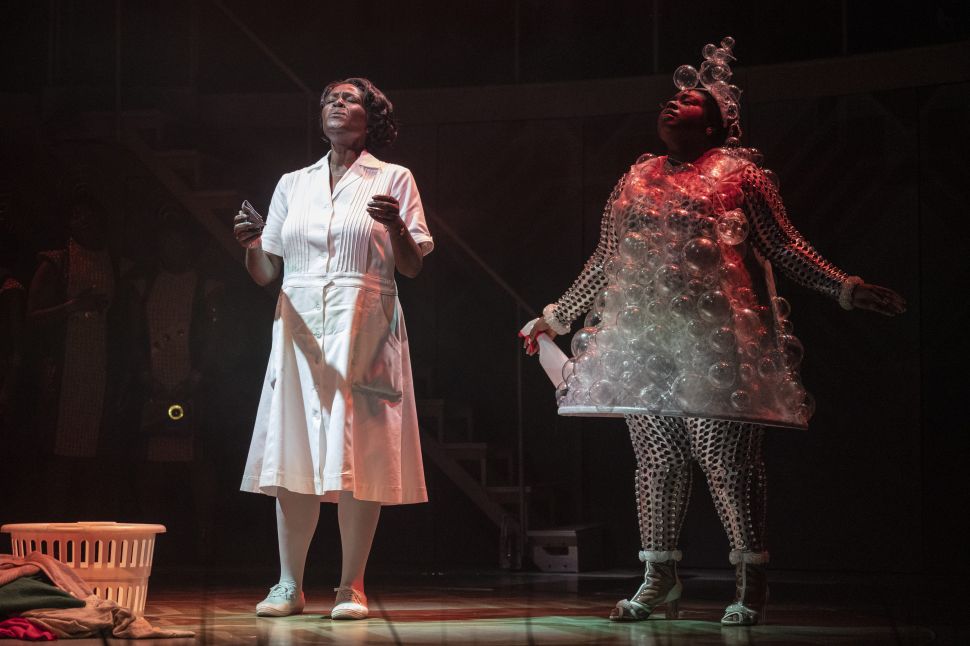