In a new exhibition, “Vasily Kandinsky: Around the Circle,” the Guggenheim presents over 80 works from the revolutionary art theorist and abstract painting pioneer. On show until September 5 2022, the curated artworks stretch along the high to mid-section of the rotunda and retrace a life of uprootedness, artistic awakening and the necessity of inner expression.

Kandinsky’s experience of displacement and its significance on his personal and artistic trajectory are two-fold. They include a physical displacement, which led him to interrogate his sense of space and revive intimate memories through art, and a psychic, inner displacement through synesthesia, a neurological aptitude which enabled the artist to “see” colors in music (you could try to imperfectly re-enact this via Google Arts + Culture).

Set in reverse order, the exhibition confusingly starts with the end. We are first drawn to Kandinsky’s final years in France (1934-1944). It is there that I first became acquainted with his legacy. A library in the Pompidou Center in Paris bears his name and I would sit in its warm space, reading on the floor between two classes. Next, the display retraces his interwar years teaching at the Bauhaus in Germany between 1922 and 1933 before the Nazi regime closed the school. We revisit his return to pre and post-revolutionary Russia and involvement with avant-garde artistic movements (1914-1922) and glimpse at his earlier figurative and Blue Rider years in Germany before the onset of World War I. While perhaps intended to emulate Kandinsky’s unconventional, non-linear style, it’s a disorienting choice which blurs key inflexion moments, influences, growth and the arrow of an overall artistic journey.

Kandinsky’s groundbreaking treatise On the Spiritual in Art is an essential companion to appreciate his abstraction and demystify some of its apparent complexity. In it, Kandinsky exposes his aesthetic theory—centered on color and form—linked with a reawakening of the soul and a re-enchantment of art.

“Color is the keyboard,” he writes and pieces in an artwork can be in or out of key changing its nature. In Kandinsky, one searches for the melodic or the symphonic, sonic events on the canvas and eruptive or coagulating chromatic movements, chords, accords, repetition, counter-movements, sensual impact, semiotic conversations, element of surprise, and zones of energy. Black and white are silent colors; they are also birth and death. Ladders indicate transitions and cautious optimism, such as in Courbe Dominante (1936). Color provides an interstitial space to hold biomorphic worlds such as in Environment (1936) and Formes capricieuses (1937), and possibilities in Inclination (1931). Violet-Orange (1935) recalls the primeval union of opposites at the heart of creation and the mysteries of alchemy.

In the dynamic Komposition 8, Kandinsky’s fusion with music suggests that painting doesn’t exist on its own but in response, in conjunction with, another artistic expression. In this interpretation of interdependency, the realm of the non-objective—circles, rhombuses, squares, triangles, trapezoids, arches, lines and more—populates a rhythmic page of motion, a foundation to the fragile edifice of structural integrity. “Every form is as sensitive as a cloud of smoke,” he wrote.

The “what” mattered more than the “how” to Kandinsky. His spiritual art sought infinity and a departure from traditional figurative painting signaled an interest in understanding, to generate deeper insight over reproducing a material actuality. His essence of reality is a visual metaphor and a perceptual representation of truth. Kandinsky’s non-objective leans towards an exploration of the subconscious; its form is multidimensional and freeing. His art conveys a sensation of memory but also carries elements of a collective unconsciousness. For Kandinsky, art is an experience of spiritual elevation. Harmony coexists with discord on a canvas as much as in the fleeting space called life.

More than a primary form, the circle is an object of fascination. As a duality, it combines the “concentric and eccentric” and its symbolism of union and tension projects to a fourth dimension. Carl Jung remembered the circle as the Self (one of his twelve archetypes) and an inner dot would represent the ego. The Self combines consciousness and unconsciousness. A circle can be solar, infinite, alchemical as in the ouroboros symbol of the snake biting its tail or when its chromatic properties mutate. The circle is a color wheel, a palette, and a psychology. Goethe and Schiller had created a Rose of Temperaments connecting color and humoral theory or character. Yet little of this is explicitly conveyed in the exhibition.

One circumambulates the Guggenheim rotunda physically experiencing the elliptical numbing effects of a sinuous interaction with the paintings. The search for the circle in Kandinsky’s art is a metaphorical adventure towards the esoteric, a quest to reveal the invisible and understand the hidden.

The Guggenheim Museum has a deep-running, personal history with Kandinsky. Salomon and Irene Guggenheim began to collect the artist’s works as early as 1929. The Guggenheim collection contains over 150 artworks from Kandinsky and On the Spiritual in Art was first translated to English by the museum’s first director, Hilla Rebay, and published by the Guggenheim Foundation in 1946.

With several Kandinsky exhibitions already held at the Guggenheim, one does wonder what is new, daring and radical with “Vasily Kandinsky: Around the Circle.” Along the rotunda lower ramps is a retrospective of decolonial Lebanese artist, Etel Adnan (“Etel Adnan: Light’s New Measure” until 10 January 2022). While Kandinsky’s influence on Adnan (who is also on show at the Paris Institut du Monde Arabe) is poetically acknowledged in one of the panels, I identified a missed opportunity for a meaningful dialogue on the two artists’ respective circles of home and foreignness. What would the minimalistic sunset of a revived, reimagined Beirut say to the circles of the Old Believers in Vologda province, which Kandinsky visited as an ethnographer in 1889? How do the chromatic commonalities of their folklores express themselves in physical sensation and emotional vibration (as Kandinsky had conceptualized the effects of color) if placed side by side, rather than in distinct geographies and corners? In what ways does the circle speak to us, today? Both carry a nostalgia and a longing—for places lost in the case of Adnan, for spaces unvisited in the case of Kandinsky—and a more synergistic approach could have fostered an additional reckoning on the richness of multicultural contributions to abstraction. The forthcoming solo exhibitions of Jennie C. Jones and Cecilia Vicuña, also set to “interact” with Kandinsky, could address this, as well as hopefully confirm the museum’s slow steps towards a genuine commitment to inclusivity and diversity.

This exhibition lacked the extra vibrancy I’d wanted to see. In his works and life, Kandinsky called for a true spiritual, cosmological revolution. His velocity and artistic flux may be the perfect antidote to a current state of stasis. Through facing contradictions, subordination, discordance, dispersions of power, antitheses, and contrast, the floating lines and dots of existence become approachable, their confusion eventually—one hopes—embraceable. 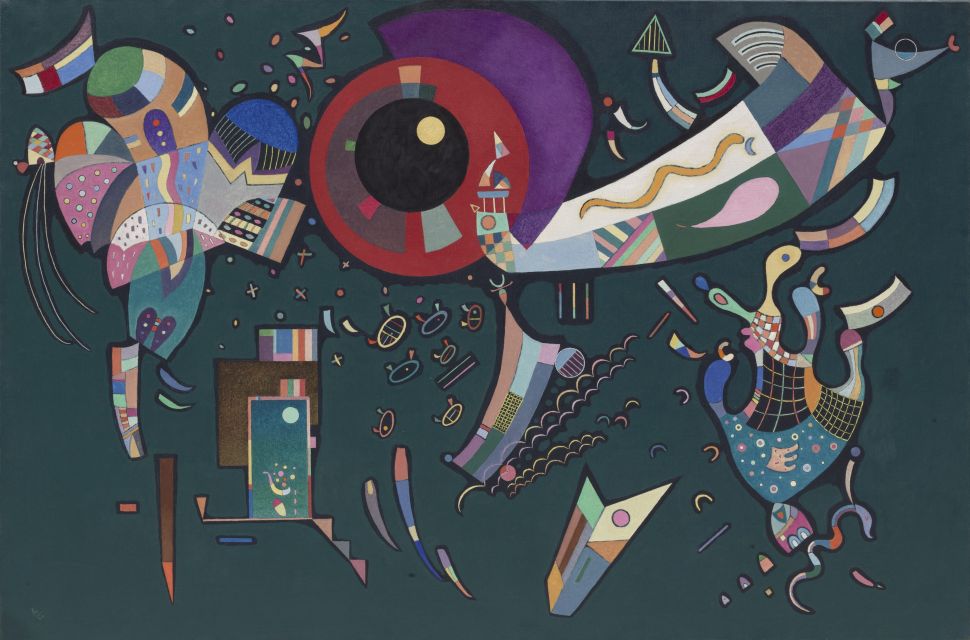