Jungle of Desire (2015) narrates the journey of a voyeuristic husband, his unsatisfied wife turned sex worker, and the corrupt police officer who extorts her services. An Emo Nose (2015) chronicles a detached nose/phallus in pursuit of its own adventures. The Other Side (2015) explores the artist’s ambivalence about not leaving the womb of Hong Kong. Who’s the Daddy? (2019), pathological memoir, relates the tale of a dating app relationship, an eyeball stabbed out with a spiked high heel, and the adoption of a redemptive aborted fetus. Fables 2 (2019), which follows Fables 1 (screened at The New Museum Triennial in 2018), tallies two more animal tales of urban alienation. At thirteen minutes, Sorry for the Late Reply (2021), commissioned for The New Museum exhibition, is the longest single video of the group, and a sprawling epic of toon psyches and varicose veins.

Ping’s videos—hallucinatory, strobing, airless—are inescapably personal. As viewers, we reel in the candy shop colors and blink with the revelation—like we’re in some hallway under the fluorescent lights—that whatever this horror, it is happening. Ping has described himself as a comedian, and he is funny—a bent nail inside your body kind of funny. And he’s likened himself to a pop singer who has to sustain a state of “lovelornness” to create—and there is an argument to be made that Ping’s works are lovesick puddles of puke. But the love/humor of Ping’s work is deeply interior—in the bubble of a private technological hell. “I live in the internet,” Ping told Frieze, “so I make work there.” If there is, as the artist has discussed, something “warm” about the confines and concomitance of dystopian Hong Kong, there is also a loss, an almost total loss, of personal identity and individual space. As Ping narrates in The Jungle of Desire: “The city doesn’t want you to stop. People build spikey things to irritate you. People even wake you up if you fall asleep in the park. As if resting is a sin.”

Ping’s characters give the impression that they don’t even belong to themselves. They are passive commuters of fate. Longing, fetishism—these are not just the results of the internet, these are the problems that bring us to the internet, that fuel the internet. Maybe this construct will apparate my soulmate, maybe this kink will get me off. The internet is repression and lurid desire. To feel hope or passion, we’ll try it.

Internet = self = state. There’s no separation, and little to no chance of transcending the equation. Who’s the Daddy? ends with Ping’s video persona compelling his adopted fetus (bestowed to him as a guilt gift) “to passionately kiss your daddy.” The only way to interpret the video, short of calling in protective services, is political allegory. (A few misguided parents bring their children to Your Silent Neighbor, and then quietly shuffle them out.) Ping, the unwanted, undead ward of the state, is also the father, i.e., the state itself. The admonition “to passionately kiss your daddy” originates in a Chinese fable that’s gone just so wrong in the twenty-first century. In Ping’s Fables series, the allegories are candidly overt. In Tree, from Fables 1, a tree on a bus watches a cockroach crawl on an elephant, is tortured by an inability to tell the elephant about the roach, and is finally resigned to avoid the situation altogether by going to the upper deck of the vehicle. Complacency/collusion in action. In Cow the Super-Rich, Cow proves his maxim, “happiness is only real when shared,” by slow-cooking himself to death. In a particularly moving sequence of Sorry for the Late Reply, a chameleon changes colors continuously to avoid being the object of racist remarks, and consequently dies of exhaustion.

Assigning influences to Ping is curiously distasteful: outmoded and me-centric. Ping’s videos are post-historical—after that AI-powered instant when all of the past became the ever-present, only-present, geo-present result of a Google search. But, making the futile procession: there is a Creepypasta modernism to Ping’s forms, palette and compositions. Mondrian on acid and, uh, maybe ketamine. Fast-forward a few decades and Ping is in vitro in the bizarro geometric worlds of 60s animation: Chuck Jones’ The Dot and The Line (from the book by Norman Juster). Skip forward again: the liquid light shows and primitive animations (sometimes cartoons, sometimes video filters and sometimes early computer graphics) of, let’s say, Pink Floyd or the Grateful Dead shows. Next, the “classic” video games. Flat and colorful and full of anxiety. Super Mario Brothers. In that same mid-eighties moment, we foresee Ping’s brash colors in the downtown scene of New York’s East Village: Club 57 and The Fun Gallery. But Ping’s work is not so much referential to sources as referential to other references. Echoes are not of Mondrian, but of other echoes of Mondrian. Ping’s aesthetic is retro of retro. There’s no memory. It’s tempting to find cause and effect antecedents in underground comix and manga—but a strong lineage just isn’t there.

Ping has expressed our gamified existence. Juvenile? Crude? Bewildering? Sinister? All too familiar? As Ping told Cura Magazine in 2019:

“If you take a look at the various behaviors on the internet, you will see our clothed bestiality is being exposed all at  once. It is not that society is going backwards, but that humanity has always been primitive.”

Convincing? Yes. But Ping’s allegorical constructs are not really moralizing, not really diagnostic with some intention of self-improvement. A corollary to our own Edwardian demise, as rendered by Lisa Yuskavitch or John Currin, is ready-made; Ping as a syrupy indulgence of the collective death wish. But if Ping’s videos are self-immolatory in their onanism, there is, as well, the realization that we are being acted upon, that something is happening to us, something is being done to us. Maybe there is a Versailles, somewhere, but the fantasies and best-hoped for lives of Ping’s sorry creatures are forcibly smushed into their small outlooks and even smaller apartments. Um. Tape measure, please. 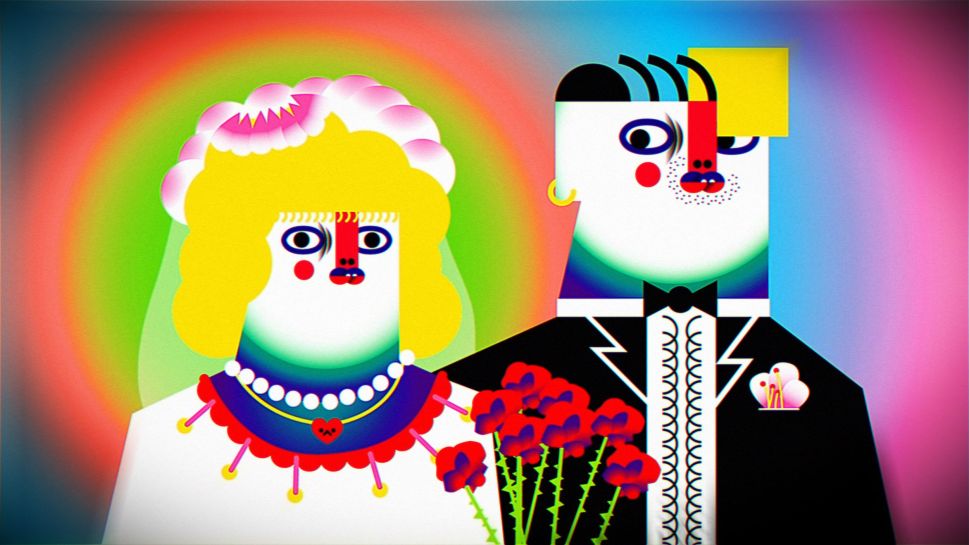