At a conservative rally last month in Idaho, a young man took the microphone to ask, “When do we get to use the guns? How many elections are they going to steal before we kill these people?” I’m assuming this upstanding citizen could not get a ticket to the sold-out Assassins.

Stephen Sondheim and John Weidman’s musical fantasia about President killers (or would-be killers) from John Wilkes Booth to John Hinckley Jr., has never not explained our country to us. It opened the night America went to war against Iraq in 1991, and paranoid patriotic fervor curtailed the run. A 2001 revival was postponed after September 11. The well-received 2004 Broadway premiere shuttered in advance of the RNC convention in midtown. During Trump’s reign, an Encores! concert version adeptly staged by Anne Kauffman made you reflect that “POTUS” and “malcontent” had become one.

Now Assassins is prophetic all over again as hideous dreamers across the country take up arms to shoot at electoral phantoms and lies, embodying the warning words of the Balladeer: “There are those who love regretting / There are those who like extremes / There are those who thrive on chaos / And despair.” With a grimly trippy book that’s part Mad Magazine, part Brechtian Lehrstück, woven through a dazzling score that embraces American folk, marching band, and pop, Assassins is Sondheim showing my generation (at least) how dark and harrowing musical theater can get. And like a stalker, or an obsessive lover, the piece shadows us, decade after decade. Whether you’re talking about terrorism, doomsday cults, lust for fame, or simply the fetishizing of firearms by impotent bigots, Assassins is the looking glass that theater folk periodically dust off to show us how much we’ve declined.

John Doyle even ends his timid, visually bland revival at Classic Stage Company with an image from the January 6 Capitol riot: a thudding flourish that indicates the British director doesn’t trust his audience to make the connection. It’s the last of a series of obvious or poorly reasoned choices that leech tension and shock from this evergreen material, despite a strong cast and a modest but intelligent orchestration (by Greg Jarrett). I had hoped for a slap in the face at CSC (Doyle is the outgoing artistic director), but instead got a sympathetic squeeze of the shoulder. It wasn’t a total surprise. For years, Doyle’s bloodless reductions (like 2017’s Pacific Overtures) have felt distinctly collegiate—except that you might learn something in college. We’re a long way from his bracing Broadway revivals of Sweeney Todd and Company.

On the bright side, I’m delighted to luxuriate in Steven Pasquale’s reptilian Booth, Brandon Uranowitz’s passionate Czolgosz, Will Swenson’s frothy loon Guiteau, and Judy Kuhn’s ditsy, sad-eyed Sara Jane Moore, with cheeky sung narration by Ethan Slater’s choirboy Balladeer. Adam Chanler-Berat (John Hinckley Jr.) and Tavi Gevinson (Squeaky Fromme) duet with tender insanity on the stalker ballad “Unworthy of Your Love.” In a role heavier on speech than singing, Andy Grotelueschen absolutely nails every vulgar gag as Samuel Byck, a beer-swilling lout who planned to hijack a jumbo jet and fly it into Nixon’s White House. There are fresh faces in the ensemble I can’t wait to see again: Bianca Horn has a clear, strong soprano and makes a memorable impression as anarchist firebrand Emma Goldman. Just don’t expect the production around this appealing cast to coalesce into anything shocking or challenging. A funereal restraint hovers over the night.

In all fairness, Assassins is not an easy show to design or direct. Built around surreal skits and ten songs, it’s more of a transhistorical revue than a plot-driven book musical. It takes place in an abstract America where the laws of time and space do not apply. What should the set look like? The carnival fairground where it begins (a sign invites us to “Hit the “Prez” and Win a Prize”), or locations tailored to the individual assassins’ milieus across two centuries? Should it be interactive, multimedia, multiethnic, deconstructed, queered, or arranged for Norwegian death-metal ensemble? You see where I’m going: the possibilities (pending licensing) are endless.

Doyle’s key to unlock this darkly thrilling puzzle is…flags. Many flags. The stage is painted with a giant one, so we’re essentially watching 105 minutes of homicidal maniacs trampling Old Glory underfoot. The Stars and Stripes also appear folded in traditional manner, presented reverently; when a person is killed, actors extract long red ribbons from the bundle. Actors wear flag-patterned face masks. And its colors are distributed to the red, white and blue jumpsuits (designed by Ann Hould-Ward) worn by members of the ensemble. What does all this iconography portend? Is it alerting us to ersatz patriotism, or desensitizing us to core democratic values? The dramaturgy of face masks is particularly baffling. The assassins sing the ecstatically cynical “Another National Anthem” and after, dutifully re-mask. So they’re crazy enough to kill the Commander in Chief but would hate to infect a neighbor? Got it.

Almost worse, Doyle doesn’t seem interested in bodies, how they can activate each other or the space in a dynamic or dangerous way. Too many book scenes are blocked with people sitting on the deck, passive. Too many musical numbers consist of actors marching in patterns. The overall pacing is slack and empty, calling attention to the small band and the potentially numbing nature of the pseudo-vaudeville structure. Doyle recoils from razzmatazz and messy emotions, opting for a cerebral sangfroid with the appearance (but not the reality) of depth. The result is cautious when it should be reckless, frigid when it should be sexy, and irked when it should be enraged.

I can’t be the only Sondheim nerd sick of respectful, minimalist approaches. Give us full orchestras, monumental design, directors eager to wrestle with convention; scale up, you cowards. Don’t relegate the full sonic and dramatic force of the past century’s greatest musicals to the concert hall or opera house. Or if you’re going to do it in a small venue like CSC, freak the hell out of us. No, those who long for an Assassins to disrupt our peace will have to wait until the next civic atrocity. Take discomfort in the fact that this ominous triumph will always wait for us in the dark, finger on the trigger. 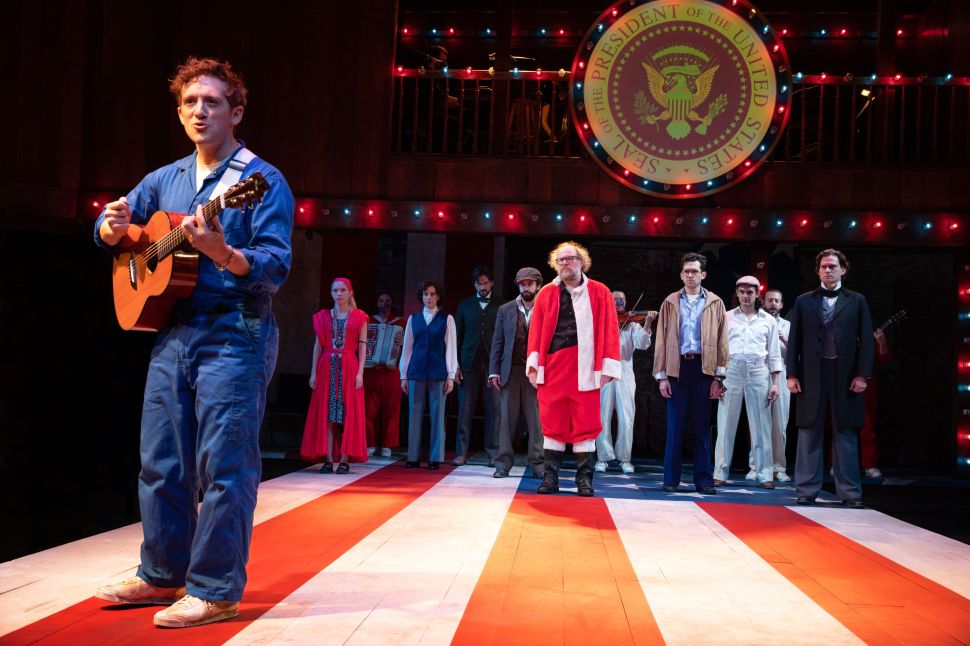