Jude Hill—the fresh-faced debutant at the heart of Belfast, Kenneth Branagh’s most personal film to date—vividly remembers the day that changed his life forever.

After completing an intensive audition process for the film, which began with a self-tape and ended with a series of Zoom calls, Hill returned home from school one day when his mother showed him a life-changing email: At the age of 9, he had been cast as the lead in Branagh’s semi-autobiographical, black-and-white love letter to his hometown.

And while he didn’t immediately understand the magnitude of this project, the first-time actor was only a Google search away from discovering the star power of his co-stars and writer-director—and the deadly nationalist conflict known as “the Troubles” that has left an indelible mark on the history of Northern Ireland.

Within a matter of weeks, Hill found himself on set for the first time, shooting the scene where Buddy asks his father (played by Jamie Dornan) if they will have to leave Belfast amid rising tensions in their benevolent neighborhood in the late 1960s. “Two weeks prior, or a week prior, we all practiced our scenes at a table, and that just helped me to understand the cast a bit better,” said Hill, now 11 and as charming as his onscreen counterpart.

In a video interview from Los Angeles, Hill and Ciarán Hinds (who plays Pop, his grandfather) discussed their first meeting and initial impressions of one another, the joy of working with Dornan, Caitríona Balfe and Judi Dench, and the pivotal scene between their characters that ultimately gives Buddy the courage to leave Belfast.

Observer: Do you remember the first day you met? What were your initial impressions of one another?

Ciarán Hinds: (Looks at Hill and smiles.) I thought, Who’s this little guy walking into the room with that cheeky smile on his face and the brightest eyes you’ve ever seen? And it turned out to be Buddy himself!

Jude Hill: And Ciarán was already in the room when I walked in, and… (Turns to Hinds.) You were kind of confusing the first time I came in, because you didn’t say hi. You said something weird, like, “I’ve been expecting you!” (They both laugh.)

Hill: Yeah, I remember you did it in a funny voice.

Hinds: That’s not much of a welcome, is it? (Hill laughs.)

Hill: But it was funny. It was a very nice moment.

Hinds: You’re just a dote. We hit it off straight away; we just immediately connected and got on with it.

Ciarán, you grew up not too far from where Kenneth grew up, so what were your initial impressions of his script? What parts of your own experiences or memories were you able to infuse into your portrayal of Pop?

Hinds: I grew up half a mile away from Ken about six or seven years before he arrived on the scene, so the area that he was writing about, I knew very well from memory, from my childhood. When he asked to speak to me and then he sent me the script, there was something that I connected with immediately. By page two, page three, I understood sort of the feeling that was emanating out of the script. And I understood the kind of characters he had drawn, because I guess we’re both Belfast people and the memories of our forefathers and mothers and grandparents and great uncles—I sort of recognized the characters that he had written. So it connected straight to my brain and heart.

Jude, there’s a line in the press notes where you say you share a lot of similarities with Buddy—but he supports the wrong football team! How would you say you relate the most to him, apart from the fact that you support Liverpool and he supports the Tottenham Hotspurs?

Hill: I know! (Laughs.) When I first read the script, Buddy is a film fanatic, and he loves films so much, and that’s the same with me. I’m a massive Marvel and Disney and Star Wars fan, and every time a new film’s out, I’d watch it. And not just that, but the personality and the sort of things that we like. But like I said, the football team… (Jokingly makes an angry face and raises his fist.)

There’s a beautiful scene in the film where Buddy asks if his grandfather will still be in Belfast when he comes back, and his grandfather says, “I’m going nowhere you won’t find me.” Why do you both think that is such an important scene for Buddy right before he leaves his hometown?

Hinds: Well, obviously, Pop understands what’s happening to him, and he’s not far away from death, but he wants to leave a positive message with his son and his grandson. He loves them dearly, even though he’s a rather stoic kind of person. That connection, that last piece of advice, is what he gives them. He actually says, “Go to London, go away, get out of here, you’ll be alright.” And when he says, “I’m going nowhere you won’t find me,” I think he meant “I’ll be in your head and your heart, if you need to contact me beyond that.”

Hill: Before that, Buddy was scared of the idea of leaving home, because he doesn’t know what it’ll be like, and he thinks the people will make fun of him for his accent. But I think what Pop said really landed with him, and he’s like, “It’s going to be okay. Going away is okay.”

Hinds: Yeah, and it actually parallels as well when they’re on the bus at the very end, and when Granny says, “Go. Go now. Don’t look back.” That’s very moving, because she knows that they’re gone from her life as well, but you’ll always carry them in your heart.

Jude, now is it true that you’ve been giving your onscreen Ma and Pa a hard time during this press tour? How long had it been since you last saw them?

Hill: (Laughs.) Well, it’s not really Caitríona, because Caitríona’s a nice woman. But I think Jamie sort of needs a little bit of slagging.

Hinds: Yeah, don’t start him on Jamie Dornan! We’ll be here for hours. It’s a torrent of verbal abuse to show his affection for him. (They both laugh.)

Hill: We went to the London Film Festival, and before that, we hadn’t seen each other since the wrap, and that was exactly a year ago. It was really nice to see everyone, and now we’re all in L.A. doing some press for the film.

Speaking of everyone, you obviously had an incredible director in Ken, but Jude, you had two Irish superstars — Caitríona and Jamie — playing your parents and your onscreen grandmother, Dame Judi, has Irish ancestry as well. What was it like for both of you to work with the three of them?

Hinds: They’re a fantastic group of people — and individually, they’re fantastic people as well. They’ve all got humor — lots of it.

Hill: But it’s darker though. (Laughs.) [Editor’s note: Hill later brought up that Dench has a “wicked” sense of humor and always had a joke up her sleeve.]

Hinds: No matter whether the work gets serious or it doesn’t, there’s this underlying sense of humor that one can laugh at oneself and [still] take the work seriously. I think that’s part of the Northern Ireland psyche as well, to be honest. And Dame Judi is just a wonder to us all. She’s a very special artist, I’d say. Also very real, very grounded, very truthful while still looking for the truth, still searching for it and challenging us all to keep up with her.

Hill: Well, that’s my first film, and having all of these amazing actors as my co-stars is just crazy, and I was mind blown when I found out who would be in it. And honestly, before I met them all, I was really scared, but they’re all just really, really nice people, and they’re very down-to-earth and easy-going, and you can just make friends with them easily.

And now you have cheerleaders who will support you for years to come!

This story, at its core, is about the loss of the innocence of youth and the power of love and family. What do you both hope audiences from all backgrounds—but especially younger generations—are able to take away from this film?

Hinds: For me, [there are] some things that we connect to in an intellectual way and other things, we connect with in an emotional way—and I think Ken has managed to make a film that actually does both. I hope that the younger generation comes to realize that while the thrust of youth and modern living is very exciting, there’s somehow nothing like a cocoon and the warmth of a larger family who are as one—and yet so individual. I think the more people understand that gift of parenting and love and family, everybody will be better for it.

Hill: I’d say what everyone should take away from this film—whether it’s the younger generation or the older generations—is just [that] family is everything and families are always there to support you no matter what or no matter what you’ve done. I think there’s a scene in the film—I’m not sure if it made it to the final cut, but it’s in the trailer—where Pop said, “You know who you are. You’re Buddy from Belfast, where everybody knows ya.” I think that really reassured Buddy, and that’s what I want everyone to take away from watching this film.

Ciarán, as we look ahead, could we see you doing more television again, or do you feel more comfortable with film roles at this stage of your career?

Hinds: Yeah, right now, I have no idea. I’ve also been doing a lot of theater for the last couple of years, because that was my first calling, and I wanted to get back at that. I suppose it depends… I wait for some kind of offer, because I can’t make me own work. (Laughs.) So I live in hope of somebody coming up with something, but right now, I can honestly say I have no idea what’s going to happen.

Finally, it’s no secret that this film has been getting a lot of Oscar buzz already, so what do you both make of the attention that you have already received?

Hill: I’m just really excited about all of the buzz that the film’s been getting, and honestly, if the film wins an award, it wins an award. And honestly, I just had so much fun making it, and that’s all that matters.

And you could become the youngest Oscar nominee for Best Actor since Jackie Cooper in 1931.

(Hill smiles and covers his eyes in disbelief.)

Belfast is now playing in theaters in the U.S. and Canada. 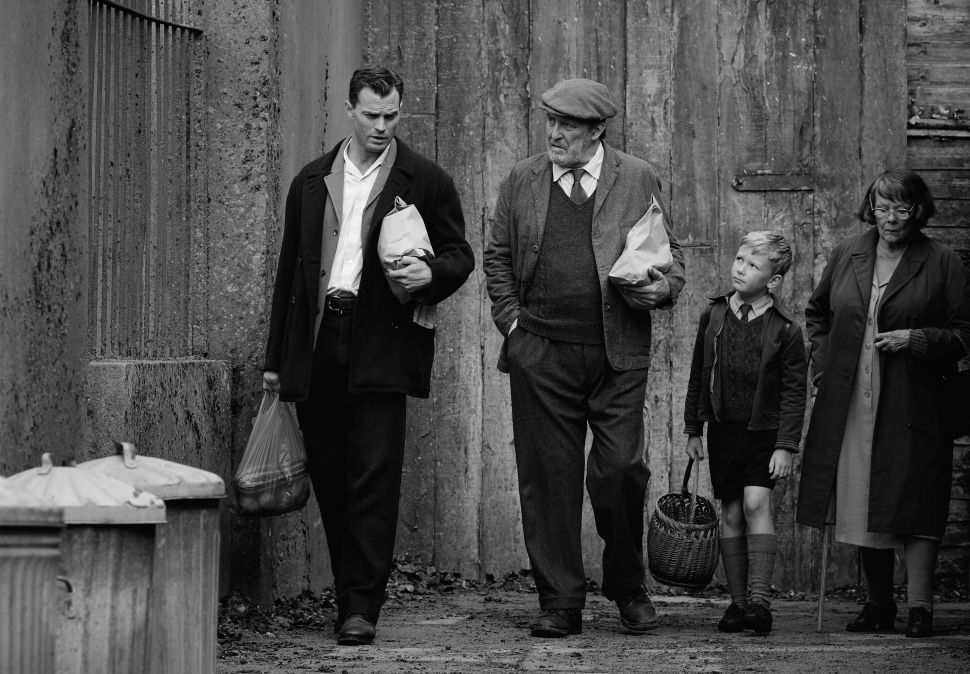