I’m ignorant as to whether or not Jeanna de Waal, the German-born yet English-raised actress who stars in Diana: The Musical, intends to live in the States, but she may want to weigh options. If any of her countrymen catch her in this tedious tuner about the trials of Diana Spencer, Princess of Wales, she could be denied reentry. Actually, too late! Last year during lockdown, this Platonic ideal of a Broadway faceplant did an onstage video capture for Netflix. The tacky, bewildering result is there for all to stream, very useful for reviewers who suffered dissociative amnesia during the live event.

British critics have already opined on the transatlantic travesty (“hysterically awful hate-watch”). Beyond its crap accents and insipid portrayal of a doomed royal marriage, Diana is insulting to, well, humanity in general. Nevertheless, I’m sure it already has devoted fans; you don’t have to venerate Lady Di to enjoy Diana, but you must be impervious to two hours of painfully generic soft rock and wretched rhymes.

The core team behind Diana is book writer Joe DiPietro and composer David Bryan (the latter also the keyboardist for Bon Jovi). Both contributed lyrics—presumably for maximum deniability. The pair is also responsible for the 2009 rock & roll racial integration musical Memphis, which won the Tony Award in a less-than-stellar season. Together they create pop-flavored scores that are fitfully catchy and instantly forgettable, garnished with lyrics that range from workmanlike to cringey. When Diana squares off against her rival for Prince Charles’s affection, the chorus seethes, “It’s the Thrilla in Manilla / But with Diana and Camilla! / The Thrilla in Manilla with Camilla!” Guys: Don’t bother making room on that shelf.

If this campy dreck has a virtue, it’s consistency. It is consistently witless and trashy; the show aims low and, assisted by Christopher Ashley’s busy direction and Kelly Devine’s swoop and jump choreography, always hits the target. Bryan slots in musical modes for characters: pseudo-operetta pomp for the royals, ’80s pop for Diana, and punk rock for the vulturous, trenchcoat-twirling paparazzi (a real turducken of a score). You’re never exactly bored, just appalled by how much derivative, soundalike music Bryan, his orchestrator (John Clancy), and arranger (Ian Eisendrath) cram into two hours without stumbling across a decent song.

The closest we get to a memorable standalone number is “Pretty, Pretty Girl,” the Act I closer, which does for haute couture what “Defying Gravity” did for flying on a broomstick. Finding herself trapped in a loveless marriage, cornered by a bullying family, Diana fights back the only way she can: with five costume changes in three minutes (William Ivey Long provides the knockoff frocks). Her feminist war cry? “A pretty girl, pretty girl / Grows more famous than before / When she decides to wear / The latest from Dior.” If Hamilton were written by white people obsessed with fashion, you’d get something like this.

There’s an attempt to lend nuance to the triangulation of Charles (Roe Hartrampf), Diana (de Waal) and Camilla Parker-Bowles (Erin Davie) and generate sympathy for the latter, which the talented Davie struggles valiantly to evoke, transforming perhaps 80% of her body mass into stiff upper lip. Judy Kaye, all arch and starch, seems to have more fun as the exasperated Queen Elizabeth II, and is a definite joy in a second role as the romance novelist Barbara Cartland (a favorite author of Diana’s), an ebullient fairy godmother in pink chiffon. Of the many, many artistic missteps in Diana, not making Cartland narrator throughout is one.

If you don’t already know the story of Diana’s courtship, marriage, mental illness, and liberation from Buckingham Palace (represented in David Zinn’s looming, carceral set), you’re probably not the target audience. Diana’s tragic death in Paris is recounted (again, Hamiltonishly) in a tactful, reverent epilogue and you’d be heartless not to lament the passing of this sensitive, charitable woman who inspired many. But there are more fitting tributes to such a complicated soul than a third-rate musical trying to cash in on her legend. Happily, Waal rises above it all with poise, humor, and a fantastic belting soprano. She skillfully captures Diana’s coltish, sly charm and her evolution from jittery bride to global diva who tames the press.

Who knows if musical fiascos such as Diana exist solely for the bitter amusement of theater critics, slumped in peeling leather armchairs by meager fires, cackling in empty rooms as they stir their lumpy gruel? There may be an audience for this stuff, those who find The Crown too artsy or Stewart short on power ballads. For all its exhausting, manic tawdriness, Diana did briefly suspend the drear of the present. It’s the kind of Broadway garbage fire that was fairly common pre-pandemic, a commercial gamble that bets on the public’s low taste—and may even succeed. In the opening number, Diana takes the spotlight and sings bittersweetly about the mixed blessing of being “Underestimated.” I don’t think I can lower your expectations any more. 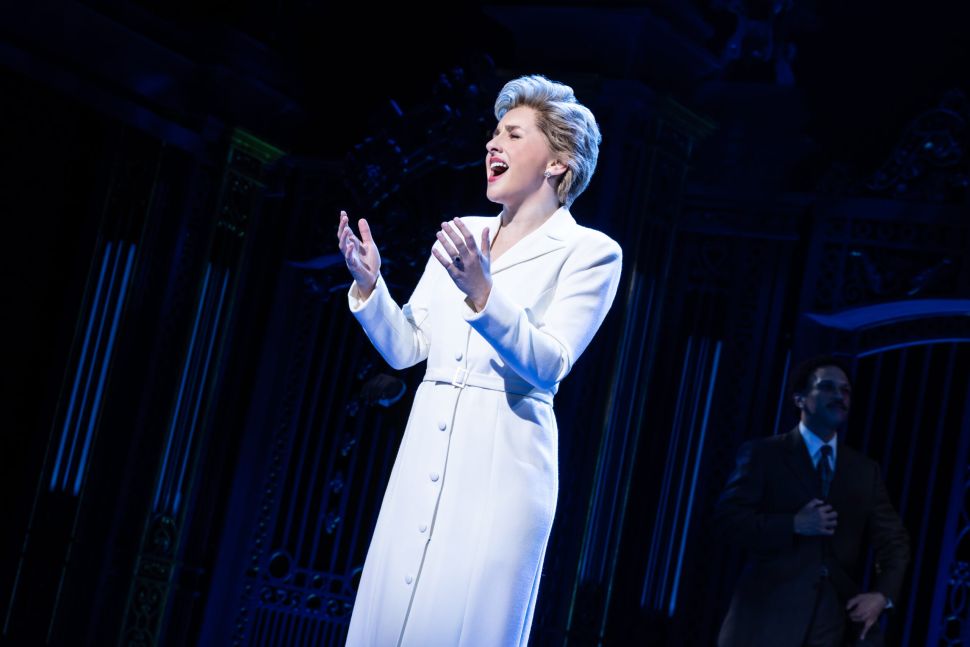