Netflix wants to be more strategic as it aims its firehose of money at splashy, star-driven productions meant to delight its legions of global subscribers. That means its big-budget efforts must surpass certain benchmarks of viewership (and quality floor checks) in order to be deemed a success. That’s what makes Dwayne Johnson, Ryan Reynolds and Gal Gadot’s Red Notice, released Friday November 12, such a fascinating case study.

The $200 million blockbuster is Netflix’s most expensive film yet. As the level of investment climbs for any studio, so too does the return required. Let’s pour through the data to determine whether or not Red Notice lived up to the hype.

In a new push for transparency, Netflix revealed that the Rawson Marshall Thurber-directed film was No. 1 on its global Top 10 Film (English) List with 148.72 million hours viewed worldwide from Nov. 8-Nov. 14. The heist movie ranked No. 1 in more than 90 countries and earned Netflix Film’s self-reported best opening weekend ever. (It was so popular, Netflix claims, that fans of The Rock then spent 6.76 million hours watching Jumanji: The Next Level, which made it to No. 10 on the new weekly updated list).

Hours viewed may measure engagement, but it’s also influenced by runtime. It’s not a perfect reflection of popularity as it favors longer titles. Ideally, Netflix would also provide rate of completion, percentage of subscribers that viewed a piece of content, and more. But it behooves major streaming services to keep its ratings data as nebulous as possible.

Still, this gives us an apples-to-apples comparison for Netflix’s Top 10 biggest original films. Here are the streamer’s most-watched original movies in terms of hours watched within their first 28 days of availability:

After just one weekend, Red Notice is already on the heels of the Top 10. That’s great news for Netflix’s bean counters. Although as Ampere Analysis found, streaming exclusive features leave behind minimal cultural footprints and face rapidly declining interest after debut.

Most Netflix originals generate the bulk of their viewed hours in the first two weeks overall. Within that, there’s likely significant decay, since the average streaming film loses 63% viewership per day from Week 1 to Week 2, according to Nielsen data. Think of it as streaming’s parallel to the all-important second weekend box office drop. We’ll have to check in next week to see if Red Notice performed to the average, exceeded expectations, or underwhelmed.

Red Notice is part of a Netflix push to develop franchise IP that functions in the Disney model, although evidence suggests that the streaming content best suited to have a lasting cultural impact is TV series, not movies. There may be a ceiling on Netflix’s ability to assemble a library of franchise film IP, but Red Notice has the makings of a new franchise based on initial interest. 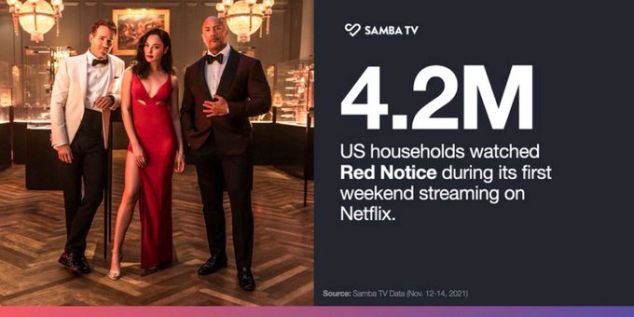 Samba TV measures selected opted-in smart TVs through its automatic content recognition technology. This accounts for 28 million devices in the U.S. According to Samba’s extrapolation data, 4.2 million U.S. households watched Red Notice during its first weekend streaming on Netflix. This is the best opening weekend for any streaming film in Samba’s data set, which began in late 2020.

However, context is the great equalizer in Hollywood’s battle for eyeballs and attentions spans. Netflix is the largest TV network in the world with the ability to deliver Red Notice to 74 million UCAN (U.S. and Canada) subscribers all at once. Meanwhile, HBO and HBO Max combine for 45.2 million domestic subscribers while Disney+ has garnered between 40 million-50 million UCAN subscribers. As Netflix’s most marketed film with the largest pie of potential viewers, Red Notice is naturally positioned to exceed established highs.

It also helps that Red Notice is a straight-to-streaming release as opposed to a day-and-date title also available in movie theaters. Still, claiming first place in any viewership contest is rarely a drawback in Hollywood.

Measuring viewership data in the modern media age can feel like a blindfolded dart throw. Different services use different metrics while studios release selective data optimized to make headlines. Netflix has declared Red Notice‘s opening weekend its biggest ever, but the service does not permit external sources to verify these numbers. So predictive content analytics platform Diesel Labs dove into the audience engagement trends around the movie’s premiere weekend and compared it to other high-profile SVOD releases to offer another data point.

Looking at the trendline of premiere weekend audience engagement, Red Notice performed closely with other SVOD-only releases (Soul, Army of the Dead, The Tomorrow War).

While viewership is the key bottom line metric in terms of title performance, limited engagement surrounding a release suggests that the “title in question is not doing as much ‘heavy lifting’ as it could be,” according to Anjali Midha, co-founder and CEO of Diesel Labs. “Breaking through with audiences and reinforcing subscribers’ perception of value (or FOMO!) for the services they subscribe to is critical.”

Midha argues that content measurement within the multifaceted streaming wars should include “audience behaviors on both viewership and conversation vectors.” Netflix is cemented as a must-have service with the lowest churn rate among the premium SVOD players. But in general, programming on streaming services that isn’t garnering the attention of audiences or reinforcing their position in the cultural zeitgeist are going to have a hard time selling the perception as must-have subscriptions.

Reelgood is an extensive streaming guide that tracks every TV show and movie available online, serving as a search engine for SVOD libraries. The service boasts upwards of 2 million U.S. users, which helps to provide a composite of domestic digital viewership based on user interest.

Despite low scores across Rotten Tomatoes (35 percent), Metacritic (37/100), and IMDb (6.5/10), Red Notice was the most-watched movie available on U.S. streaming platforms in its opening weekend, per Reelgood. It helps that it was the biggest new release in that timeframe across streaming and theatrical. But if Hollywood is increasingly relying on front-loaded box office openings to turn a profit, it’s only natural that streaming blockbusters would follow suit.

Red Notice‘s poor critical reception likely dampened the social chatter surrounding the film. We’ll see how significantly Netflix weighs that element here; the streamer previously declined to greenlight a sequel for 6 Underground due to quality concerns despite high viewership. Yet in terms of raw response, Red Notice enjoyed an explosive debut for Netflix and is on pace to become its most-watched original film.