On March 20, 2020, Disney stock hit a five-year low as the COVID-19 pandemic wrought havoc on the world. But in the oddest of circumstances, the old adage about one door closing and another opening proved true. Despite theme parks and resorts being shuttered, media networks suffering, and movie theaters all but kaput for the majority of 2020, Disney stock has risen 108 percent since that low. The success is largely due to the Mouse House’s growing streaming portfolio. As the streaming revolution continues to reshape the entertainment industry, consider Disney+, which boasts more than 116 million subscribers, its George Washington.

Yet within this COVID-related rise, there have been volatile ups and downs. From March 2021, when Disney shares peaked at an all-time high of $200, to August of this year, the company saw its share price dip 13 percent. On the back of its Q3 earnings report, in which Disney beat streaming growth expectations, the stock rebounded yet again. And then since mid-September the price has fallen about 4 percent. Keeping up with the rapid changes has us feeling as frazzled as It’s Always Sunny in Philadelphia‘s Charlie Kelly. 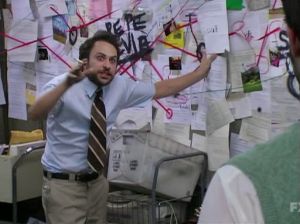 “Most investors will be looking at the subscriber growth in its Disney+ streaming service,” Anthony Denier, CEO of Webull, told Observer. “If Disney beats estimates, the stock should rise. If it falls short or forecasts subscriber growth slowing, then the stock will probably take a hit.”

There exist smaller trends to monitor outside of the market’s laser focus on streaming. Overseas expansion is vital to the longevity of rival streaming services with Disney’s ongoing streaming rollout in Latin America integral to its strategy. To feed the content-starved direct-to-consumer business, the Mouse House needs a steady supply of new films and TV series, yet it remains unknown how much the Delta variant may have affected content production over the summer. And under normal circumstances, Disney’s theme parks generate the most annual revenue for the company. How close is that division to returning to pre-pandemic levels?

The past month has been rocky from a stock perspective. But vaccine expansion for children aged 5-11 and additional boosters for adults on the horizon could prove to be a turning point.

“With the recent news from Pfizer, Disney may be ready to run with other ‘reopening names’ as future attendance may be positively impacted by this news,” Jake Wujastyk, chief market analyst at TrendSpider, told Observer. “Disney will likely be pivoting to focus on the continued increase in park attendance rather than subscription numbers from Disney+. This will likely be a difference between Netflix and Disney this earnings season.”

Sticking with the Netflix-Disney comparison, the former beat expectations in Q3 and is set up well in Q4 largely thanks to the unprecedented success of Squid Game. Disney did not boast a comparable hit in this past quarter (though few did). But the company will hold Disney+ Day on Friday, which will see the announcement of a host of new programming. It will also bring Marvel’s Shang-Chi and the Legend of the Ten Rings and Dwayne Johnson’s Jungle Cruise to Disney+ for the first time.

Since the COVID low, the price of Disney stock has closed higher one month after every earnings event. An impressive streak, but one that can’t go on forever. Disney’s Q4 earnings report will paint a clearer picture of the company’s immediate future and its place within the Hollywood hierarchy.