The worst thing to be said about Encanto, the milestone 60th film from Walt Disney Animation Studios, is that it feels like a Disney movie. From its predictably gorgeous yet unimaginative visuals, to its familiar songs and predictable story, the film does feel rather safe despite being superficially groundbreaking for the studio. And yet, when the film dives into the specificity of its portrayal of Colombia or its themes which share similarities with the seminal novel One Hundred Years of Solitude, it becomes an exciting, nuanced, complex magical realist adventure that pushes the nearly 100-year-old studio forward to a new era.

The film is set in the remote jungles of Colombia in a small Macondo-like town, where the Madrigal family has founded a sanctuary after escaping violence 50 years earlier. Now, each member of the family is born with a gift that helps protect the family and help the community, whether it’s super strength, the ability to control the weather, magical healing, and more. These gifts also have the added benefit of making the Madrigal family the elite of the town, as their magic seems to be keeping the whole community afloat—though certainly not on equal grounds, what with the huge estate at the top of a hill overlooking the town like the Madrigals were royalty.

At the center of the film is Mirabel (Stephanie Beatriz), the only Madrigal without any powers, who seems to be at the center of a threat to the family’s magic. Hellbent on being accepted by the super-family that is constantly leaving her aside, Mirabel sets out to save the family from their doom, though she may find that the cracks in the foundation started long before they became visible.

At its best, Encanto condenses some of the themes and aesthetics from Gabriel García Márquez’s One Hundred Years of Solitude and presents them in a way that’s accessible to children (without all the incest). From the magical realism in the film—the relatively casual way the family’s powers are portrayed—to subtle visual cues like the yellow butterflies from the novel being a plot point in the film, to the themes of burying the uglier parts of the past while clinging onto traditions and refusing to change.

Indeed, even if the film’s narrative of an outsider just yearning to be accepted is ground already covered time and time again in Moana or Ratatouille, the old versus new struggle is given new life by grounding it in Latin American culture. It’s not just that Maribel is an outsider in her family for not having powers, it’s that even those who do are under crushing expectations set by their abuela, who founded the town and justifies the talent and gift of each family member as a responsibility to uplift the entire community. It’s not enough to be super strong, you have to be ever stronger, or else you’re letting down your family, your town, your people. Maribel, then, is more than just the girl who can show the family a new way, but one that challenges the idea of the perfect Latin American family, the one that won’t just hide the dirty dishes and never speak of them again and accept things because that’s “the way things were” back in the day. Some of the movie’s best elements involve Mirabel and her Uncle Bruno (John Leguizamo), who was shunned from the family because his gift wasn’t deemed useful for the family, which makes it a shame he only shows up halfway through the runtime.

Likewise, the film’s portrayal of Colombia is best when it focuses not on the broad strokes like the architecture or the landscapes (though there are references to real places), but when it looks to real-life to give texture to the film. From the food (the mighty arepa literally saves people in the film), to the sombrero vueltiao, to subtle expressions like the way background characters snap their fingers in celebrations or how Mirabel’s dad uses the word Miércoles (Wednesday) as a minced oath, the film feels like a love letter to Colombia and nowhere is this as evident as in the film’s representation of the racial diversity of the country.

Even in the Madrigal family there are people of all skin tones, some are darker-skinned, some have straight hair, and this is never a big deal or something that’s pointed out to the audience. To reflect this diversity, the carefully selected voice cast is comprised of actors either native to Colombia or with heritage from the country. This brings a degree of authenticity to the film that couldn’t be replicated otherwise, from Beatriz’s curious yet vulnerable Maribel, to Leguizamo’s funny yet remorseful Bruno, and even Maluma playing into his superstardom in his small role.

Still, this is a Disney movie meant to play all around the world to audiences unfamiliar with Colombia, and when Encanto remembers that, it becomes a rather safe and predictable animated flick. The thematic nuance is there, but the plot feels like it’s ticking off boxes rather than follow its natural progression. Though the film’s soundtrack features melodies inspired by Colombia’s musical diversity, with vallenato, guaracha, cumbia, salsa and merengue being noticeable throughout the film, the lyrics by Lin-Manuel Miranda sound overly familiar.

Miranda is a known Disney fan, so it’s to be expected that he’d pay homage to classic Disney song structure, but it ends up making the songs feel like a commitment rather than a treat. The most memorable songs are the ones mostly in Spanish, “Dos Orugitas” by Sebastián Yatra, and “Colombia Mi Encanto” by renowned vallenato artist Carlos Vives, though even then they sound like just another song by those artists, rather than something new or exciting, and one has to wonder if it would have been a better idea to give Miranda a co-writer more familiar with the particulars of the country’s music.

Encanto feels like two steps forward, one step back for Disney. Its departure from the classic hero’s journey, the focus on a larger ensemble, and its portrayal of a country seldom seen in animated movies like this are commendable, especially in its attention to detail. And yet the film ends up hiding most of its cultural representation under the guise of a rural magical town that perpetuates the othering of cultures usually portrayed as more underdeveloped than America, while turning the story and music into just another classic Disney adventure. 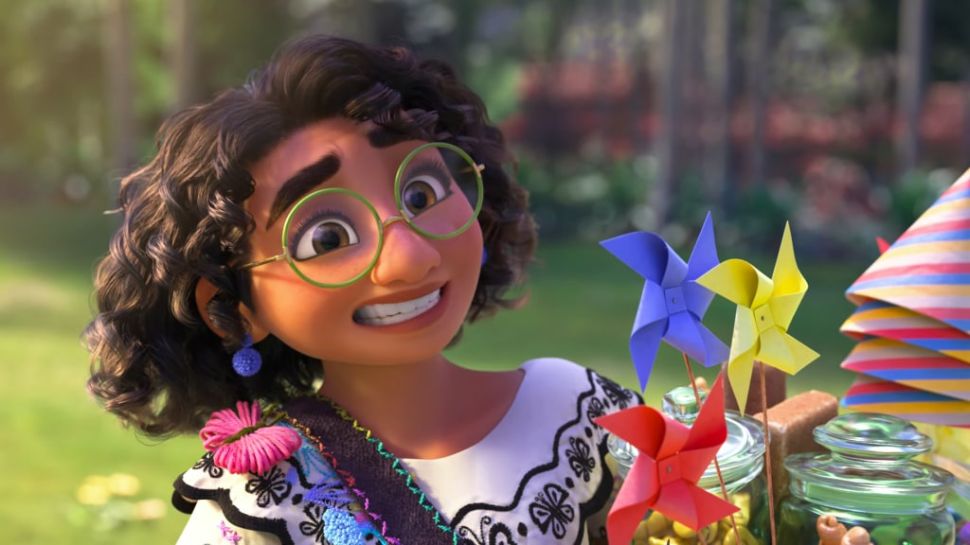