We here at Observer have kept a close eye on Marvel’s Eternals. Our coverage has already ranged from a straight review of reigning Best Director winner Chloé Zhao’s blockbuster, how Eternals differs from previous MCU entries, and when fans can expect to see it on Disney+. But now that the oft-delayed film has finally arrived in theaters, it’s time to dive deeper into its story. We’re talking about its implications for the Marvel Cinematic Universe, major character decisions, post-credits scenes and more so be warned: spoilers are ahead.

How does Eternals expand the MCU?

Prior to Eternals, MCU fans have only been exposed to the god-like creators known as the Celestials in a brief exposition scene in Guardians of the Galaxy and its sequel, which revealed Kurt Russell’s Ego, who was Peter Quill’s father, as a Celestial. These beings of seemingly unlimited power who seed life throughout space are far more prominent in Eternals. Arishem, a six-eyed red cosmic goliath, is the film’s primary string puller and our most personal introduction to this race thus far. In our limited experience, Celestials appear to be the most powerful beings in the MCU (chew on that, Thanos).

In the film, we discover that Celestials created the Eternals, a race of near-immortal beings with special powers, to protect life throughout the cosmos. But their true goals create a debate about sacrificing for the greater good. It’s revealed that embryonic Celestials exist deep within a planet’s core and feed off the growing life force of sentient species. Thousands of years later, they are birthed during an event known as the Emergence, which destroys the planet now populated with life. Not exactly an ideal give and take.

In Eternals, our heroes prevent the birth of a new Celestial on Earth, which threatens the cosmic cycle of destruction and creation and draws the ire of the existing Celestials. The husk of the ruined Celestial emerging from Earth is marooned in the ocean, which could potentially lead into the introduction of famous comics character Namor and Atlantis in Black Panther: Wakanda Forever.

Who is the breakout character?

Kumail Nanjiani’s Kingo and Brian Tyree Henry’s Phastos are bonafide scene stealers; Angelina Jolie’s Thena mixes ferocity with sensuousness; Gemma Chan’s Sersei and Richard Madden’s Ikaris create a compelling dynamic. But Barry Keoghan’s Druig brings a fascinating perspective to the film in limited screen time. With the ability to control minds, he wrestles with the fact that he could eliminate all violence and wrongdoing among humanity, but is forbidden to interfere by the Celestials. He struggles to understand why he can’t save humanity from our own self-destructive behavior.

Salma Hayek’s Ajak correctly points out that removing free will from humanity will render us no longer human. Druig’s desire to shield us from injustice comes from an almost paternal yearning for protection, muddled as it may be. His frustration and disillusionment with their mission pushes him to be the first to break free from his surrogate family. He then spends untold years living in self-imposed exile with commune of sorts, losing faith in humanity and the gods that created him. Druig is at once an empty vessel and a hopeful myth.

The best moment in Eternals is…

When Ikaris flies into the sun at the end of the film. I’ve long discussed Marvel’s reluctance to embrace meaningful character consequences within the franchise. The MCU can often prefer to sidestep true lessons as it bends over backwards to ameliorate the past mistakes of our protagonists (see: Black Widow) or allows them to prevail while repeating the same mistakes (see: Spider-Man: Homecoming, Doctor Strange). But in Eternals, which feels like the MCU’s most mature outing, Ikaris realizes the totality of his own failure at the feet of the only family he’s ever known and commits suicide as a result. He cannot live with his own choices and cannot bear the weight of his own betrayal.

Death does not automatically equate to thematic significance. But his choice is a poetic meditation on morality, accountability, and perhaps even cosmic destiny.

In the first post-credits scene, Harry Styles is introduced as Eros AKA Starfox, Thanos’ brother. His role in the MCU moving forward can be a crucial one. He is our first glimpse at another Eternal outside of the film’s main characters (though Thanos is something of a mutant Eternal). These are powerful beings that could wipe out the Avengers if they choose. Knowing more about them and their place in the universe will be important. Eros can provide backstory for their history and contribute much-needed insight into the structure of the cosmic hierarchy that is growing increasingly complicated.

In the second post-credits scene, Dane Whittman (Kit Harington) is scared to touch his family’s sword after telling Sersei that his lineage is complicated. As he reaches for it, the voice of Mahershala Ali’s Blade is heard off screen asking, “Are you sure you’re up for that, Mr. Whitman?” This suggests that Dane will also be in the Blade solo film, which is a unique pairing. Dane’s family sword, the Ebony Blade, was also a symbiote in the comics and maintained a similar look in the film. This could serve as a potential bridge to the Venom franchise now that the character has been transported to the MCU. 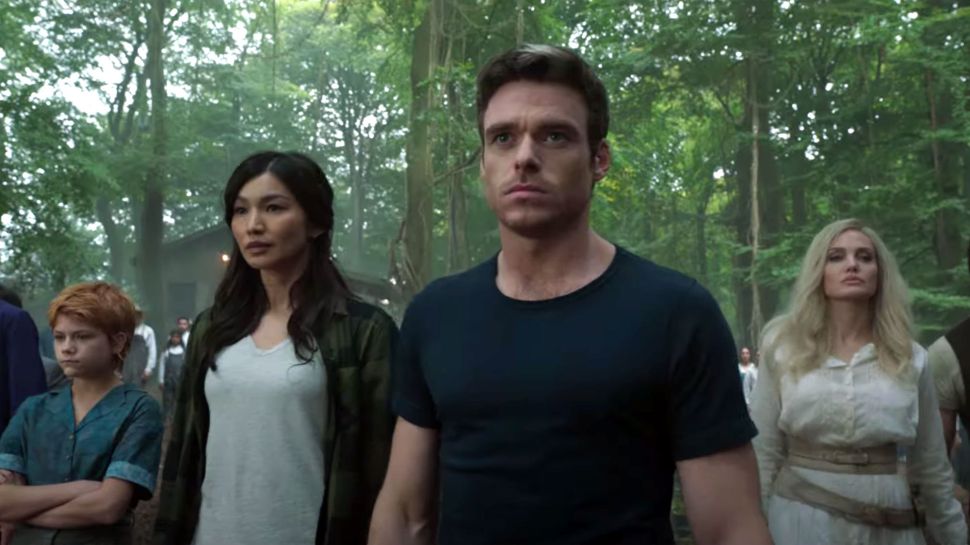