Since Peter Gelb took over in 2006, the Metropolitan Opera has, for the first time in many decades, been regularly presenting contemporary operas. Three of the company’s new productions this season feature works first performed within the past five years. On opening night in September Terence Blanchard’s Fire Shut Up in My Bones proved a rousing critical and popular success, and last Tuesday Music Director Yannick Nézet-Séguin returned to the podium for the house premiere of Matthew Aucoin’s Eurydice, an ambitious, puzzling attempt to reimagine a Greek myth that has enthralled creative artists for centuries.

Revered as an unrivaled musician, Orpheus ventured to the Underworld to reclaim his wife Eurydice after she died from a snakebite. So potent was his singing and lyre-playing that Hades was convinced to allow her to return with her husband on the condition that he not look back at her until they had reached the land of the living. Unfortunately, Orpheus succumbed to the temptation to once again see his beloved, and she was immediately returned forever to the Underworld.

Inevitably the tragic tale of Orpheus was the subject of several of the very first operas, including Monteverdi’s 1607 La Favola d’Orfeo, the art form’s first masterpiece. Since then, dozens of works have been written about his story; the most famous being Gluck’s revolutionary “reform” opera Orfeo ed Euridice.

Aucoin’s long connection to Orpheus first reached New York audiences in 2017 when his lush short vocal work “The Orphic Moment”  was interpolated into a staging by MasterVoices of Gluck’s Orfeo. By then, the Met, along with the Los Angeles Opera, had commissioned Aucoin to compose Eurydice, his second full-length opera with a libretto by Sarah Ruhl adapted from her 2003 play of the same name.

One might imagine that only composers retain a fascination with the Orpheus legend, yet in the 21st century it continues to compel attention across many media. Richard Powers found inspiration from the ancient minstrel in his novel Orfeo, while grief over the death of his wife prompted Julian Barnes to conjure Orpheus and Eurydice in his memoir Levels of Life. In recent films, director Céline Sciamma’s rapturous lesbian romance Portrait of a Lady on Fire spins a provocative interpretation as to why Orpheus looks back, while baffling allusions in Hugh Jackman’s latest, the dystopian noir Reminiscence, have sent confused viewers to the internet to search out who the doomed Greek lovers were!

Although the two of the earliest operas, Peri’s and Caccini’s, are entitled Euridice, they focus on Orpheus, not the title character. In both Monteverdi and Gluck’s celebrated versions as well, she appears only briefly. Rather than simply recount the traditional myth Aucoin joined Ruhl on speculating just who Eurydice is. Unfortunately, their unsatisfying answer may be the biggest problem with the new work which premiered in Los Angeles just prior to the pandemic closed opera houses worldwide: their 21st century heroine just isn’t very interesting!

When first seen, their Eurydice grows increasingly impatient with her lover’s obsession with the music in his head. As soon as they are married, the bored bride flees after expressing the odd notion that weddings should foremost be for fathers and daughters. Rather than die of a snakebite, Aucoin and Ruhl’s heroine falls to her death after having been inveigled by the disguised Hades to visit his sinister penthouse.

Once in the Underworld, which is overseen by three chattering Stones (or, to paraphrase Anna Russell, infernal Andrews Sisters), Eurydice has forgotten who she is and frets about where she’ll reside in her new surroundings. Gradually thoughts of Orpheus return to her through the patient ministrations of her father who has welcomed her to Hades and has not lost his memory. After Orpheus wins her freedom, a vexing question arises: does Eurydice call out to her husband causing him to turn around because she wants to remain with her loving father rather than return to a marriage she finds problematic? The answer may well be yes!

A crucial aspect of Eurydice in Ruhl’s play has strikingly been omitted from the opera: while Orpheus has music, Eurydice loves words. She’s a reader with a searching intelligence, and that contrast between the lovers gives a complexity to their relationship that the opera lacks. While Aucoin gifts Eurydice with compelling music for her final monologue, her preoccupations remain disappointingly banal as she writes a letter to Orpheus’s future wife: “Be sure to comb his hair when it’s wet… Give him lots to eat, He forgets to eat and gets cranky… Because this is what it is to love another.”

Her farewell to both Orpheus and her father (who has finally chosen to obliterate his memories) proved curiously unmoving, despite Erin Morley’s urgent performance of the title role. Her radiant soprano glowed when the vocal line occasionally soared but often her music was lost thanks to the dense orchestration. Morley’s effortlessly appealing stage presence couldn’t transform the creators’ blandly ordinary Eurydice into a sympathetic flesh-and-blood woman.

Bass-baritone Nathan Berg, in his Met debut, as Eurydice’s father proved the opera’s most sympathetic character. His canny, careful attempts to make her remember were quite touching as was his intricate monologue before dousing his memory forever.

Unexpectedly the figure of Orpheus remained opaque throughout, his monumental journey to the Underworld uninspiring. Joshua Hopkins’s ardent baritone rang out bravely but he couldn’t overcome one of Aucoin’s least successful conceits. Quite often Orpheus’s music is mirrored by his double, an onstage figure portrayed by countertenor Jakub Józef Orliński, also in his Met debut. The ineffective blend of counter-tenor and baritone was further lessened by the Polish performer’s recurrent difficulty in being heard when singing with Hopkins.  Little of the double’s music lay in the upper register of Orliński’s beguiling voice which has made him in the past few years a wildly popular Early Music heartthrob.

Mary Zimmerman’s coolly efficient production introduced an enigmatic homoerotic frisson into the interaction between Orpheus and his double. In the opening scene, Orpheus, ignoring the chattering Eurydice, gazed longingly at his comely male counterpart. Ana Kuzmanic’s costumes for Orliński inevitably included shirts open to the navel or in one scene no shirt at all. The physical interactions between the pair manifested more intensity than any between husband and wife.

As often happens, the bad guy got the best role: Barry Banks’s creepy, piercing Hades dominated the scene every time he appeared. Celebrating the 25th anniversary of his Met debut, Banks still wields his high tenor with fearless and penetrating accuracy and his wily seduction of Eurydice was a pithy highpoint of Ruhl’s libretto. Coincidentally Hades also steals the show on Broadway where Anaïs Mitchell’s infectious Tony-award-winning Hadestown, yet another contemporary Orphic take, continues to sell out the Walter Kerr Theatre.

Nézet-Séguin led his orchestra in a bravura performance of Aucoin’s often opulent score. He relished the many echoes of Glass and Adams, of Britten and Ravel that pervade the instrumental writing. Perhaps though the conductor was rather too enthusiastic and covered the singers, especially Morley and Orliński. However, Stacey Tappan, Ronnita Miller and Chad Shelton were always splendidly audible as the clarion, dithering Stones. If only Aucoin’s vocal writing matched his orchestral prowess. So often one wanted a singer’s line to take flight yet it rarely did. Despite the performers’ best efforts, one was grateful that all the sung texts were inventively projected onto Daniel Ostling’s sparely evocative sets.

For all its storytelling faults, Eurydice didn’t bore me, yet it seems unlikely that it will capture the public imagination in the same way that Fire Shut Up in My Bones did. Perhaps Brett Dean’s 2017 adaptation of Hamlet which arrives at the Met in May will bring to life another very familiar character in a more gratifying way. 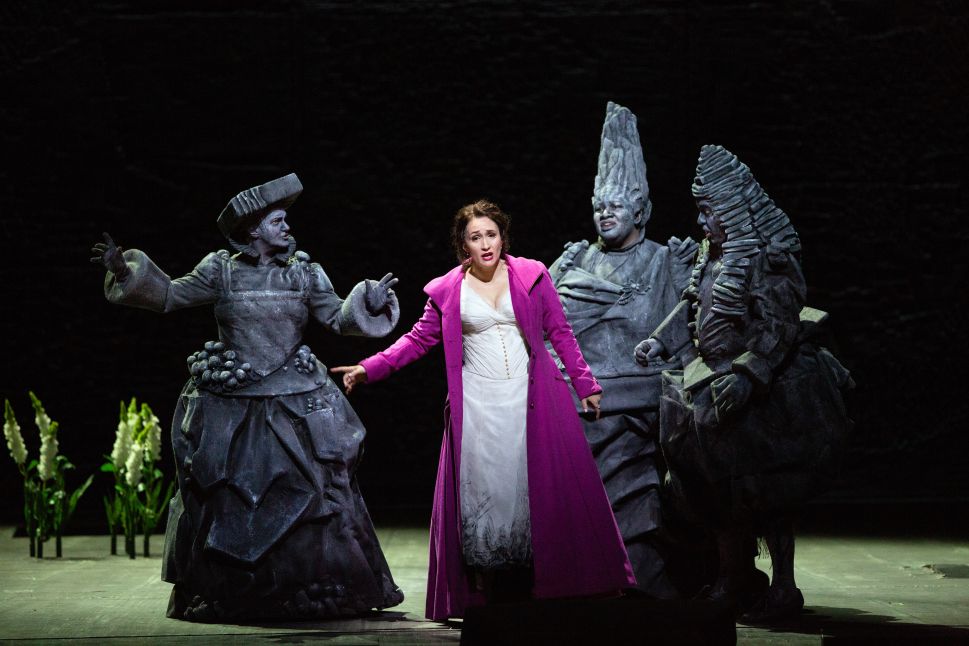