With the culmination of the hectic, hedonistic summer months comes the advent of new intellectual horizons: pretty much everyone I know is excited to suck down a couple cinnamon-laced lattes and actually learn something. Fortunately, several gallery shows on view right now are offering visual novelty, contextual depth and atmospheric charge that’ll carry you into the sun-starved weeks of pre-winter.

Director Jordan Barse only launched Theta, her inaugural gallery tucked away in a stark white Tribeca basement, in April, but already the space has juice. Theta is currently playing host to “Revocable Consents,” the first solo exhibition for the artist David L. Johnson, who here uses multiple mediums to juxtapose the pampered interiority of corporate environments with harsh hostile architecture. Johnson’s dreamy photos of potted office plants are shown alongside actual standpipe spikes, and the pockmarked structures end up reading as weirdly aesthetically intentional.

Trauma-soaked, pandemic-adjacent group shows make a lot of sense in our current climate, but they’re also exhausting, so it’s fortunate that “RECOVERY” at P·P·O·W opted for varied commentaries rather than bludgeoning earnestness. Now gone yet worth mentioning due to fascination alone, saltwaterfarm, a sculpture comprised of 5,264 plastic egg crates by the artist Carlos Reyes, confrontationally blocked the entrance to the rest of the gallery. His monument to unceasing plastic dependence bounced off of Dred Scott’s installation dedicated to memorializing and exalting victims of Hurricane Katrina.  P·P·O·W’s current outing looks promising as well: Williams’s ghostly, dreamy paintings are primed to lock a viewer into an uneasy sense of security.

For Emeka Ogboh’s first gallery exhibition in the United States, the artist has transposed his acclaimed 2017 work, The Way Earthly Things Are Going, for James Cohan’s 48 Walker Street location. The work combines audio from a Lagos marketplace in Nigeria, the traditional Greek polyphonic song “Αλησμονώ και χαίρομαι (When I forget, I’m glad)” and a real-time LED display of world stock indexes to create an atmospheric, intimate commentary on global diasporas and the search for identity.

Over the last few years, I’ve developed a condition I dubbed image poisoning. When you’re constantly inundated with imagery that ranges from transcendent to profane (on Twitter, Black Narcissus screenshots clash against deep fried memes), it becomes much more difficult for anything in particular to stand out. In this impossible environment, Shannon Cartier Lucy’s paintings (goldfish swimming over open flames, a little girl brandishing huge utensils) are unforgettable. The women she paints in domestic purgatory are often contorting themselves into odd shapes or flirting with imminent danger, but there’s immense wit coupled with the stress.

This show revolves around the artist’s “slit subject” paintings: creations constructed by linking together individually dyed strips of wool fabric. Here, according to the gallery, Alison is directly referencing Monique Wittig’s 1973 novel The Lesbian Body, wherin its characters “literally invade each other’s bodies as an act of love.” The results are lovely, spliced paintings that act as commentaries on disjointed subjectivity, and Wilson has also made clay ceramics for the first time for the show as well. 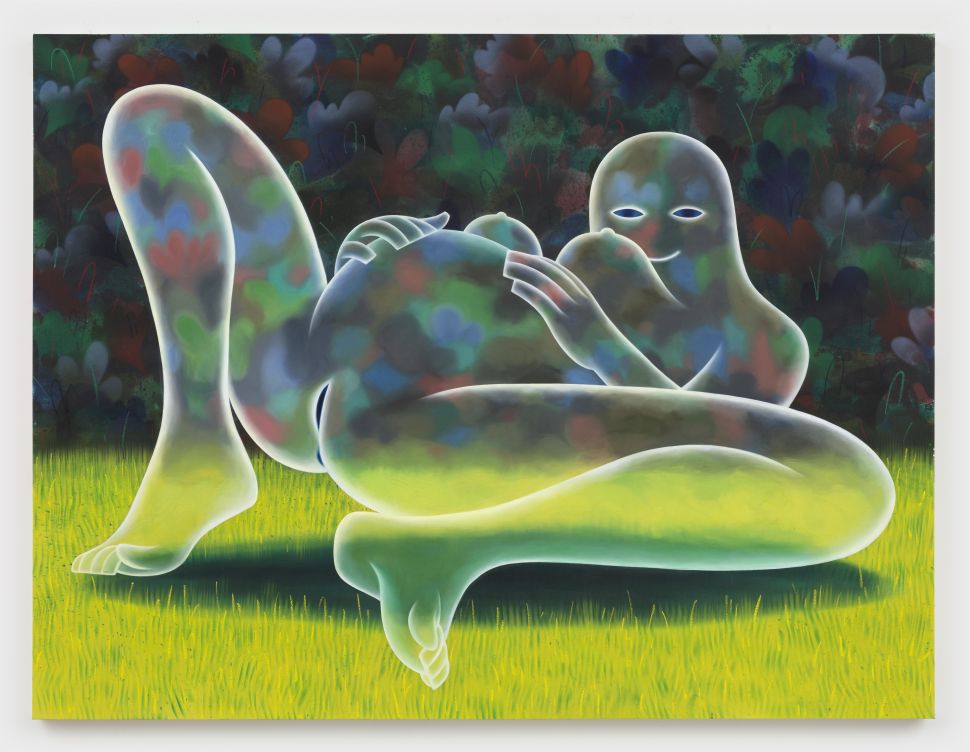