I had missed the Guggenheim’s survey of Hilma af Klint (2018-2019), which attracted over 600,000 visitors breaking the institution’s own record, and with it the chance to lose myself in the mesmerizing colors, the molecular and geometric shapes of her groundbreaking abstract form. And I had similarly missed the acclaimed 2013 retrospective at Stockholm’s Museum of Modern Art. I was determined to visit, this time, a rare series of eight watercolors dated between 1913-1915, on show at the David Zwirner Gallery, by appointment.

Because one is used to the artist’s large format paintings, such as The Ten Largest series (1907) or her three Altarpieces (1915), the watercolors appear understated and frail at first, the way a small frame can drown under the heavy weight of a couture gown or an eighties dress, due to the ebullience of her earlier series and the fame of the artist.

The “Tree of Knowledge” series falls under af Klint’s Paintings for the Temple cycle. The watercolors are presented on a single row, against one of the walls of the uptown gallery’s intimate second-floor room. The decorum inadvertently recreates a temple of sorts in its austerity and its emptiness reminded me that the gallery laid-off an estimated 20% of its staff during the pandemic while earlier calling for more solidarity in the sector (being one of its main players).

Hilma af Klint’s abstract and symbolic work preceded what we commonly refer to as the (male-dominated) avant-garde of the early 20th century—Kandinsky, the Suprematists or Mondrian to name a few. She began painting in 1906 “commissioned” by one of the “High Masters” she communicated with during her spiritist séances. Her body of work known as Paintings for the Temple emanated from this mystical belief and resulted in the production of an impressive 193 pieces. Spirits possessed her mediumistic art, “The pictures were painted directly through me, without any preliminary drawings and with great force,” she had said, until she regained more personal agency starting 1912.

In af Klint’s series, colors complement each other in low saturation echoes. The versatile artworks can be viewed individually, in pairs, trios or as a suite of eight, a number of infinity, moving from the mimetic, the repeated, to the unique. They play with contrast, the monochromatic, light and the absence of color, to create incarnations of trees of life and a reinterpretation of a universal.

The tree of life or the world tree is a powerful symbol, deeply entrenched in our collective psyche and mythology, one that Jung recognized as one of his classified archetypes. It’s a connector between the human and the divine, the earth and the cosmos, and through its roots and celestial-aspiring branches, it exists between the underworld and heaven. Its shape points out to the four cardinal directions and its verticality suggests a traditional axis of the world—an axis mundi. The historical Buddha found enlightenment under a Bodhi tree; the French king Saint Louis rendered justice at the foot of an oak during the 13th century; and Austrian symbolist painter Gustav Klimt’s painted a vibrant Tree of Life in 1909, during his golden period that conveyed the notion of a nourishing fire.

Af Klint’s trees cast a shadow and thus convey nuance and intensity. Her interpretation of this theme is prismatic and complex. Her trees come alive under gentle strokes, with heart-shaped crowns delicately framing higher spheres. A halo, womb-like shape embraces the trees and within them, we find angular and binary constructions suggesting opposition and necessary complementarity. We also notice the presence of webs, ladders, altars, angels and spirals. On the symbolic level, the trees hold the feminine and the masculine, a void and a completeness, an ascension nourished from depth.

In Tree of Knowledge, No. 7b the spheres have collided and created a different form, almost alchemically. The dual figures of a woman and a man unite in a votive offering to a higher being; the three figures form an ascending pyramid, a receptacle of pure energy and symbiosis. The detail of an hourglass, a cherub and various symbols of harmony accentuate the piece.

Arts critic and curator Julia Voss, wrote in the exhibition’s presentation statement that, “The structures generate their own proportions; they might be tiny, like a bacterium in a petri dish, or colossal, like the universal.”

Her works remained for the most part private, experienced as an intimate journey towards abstraction, pure feeling and the esoteric, which she undertook in isolation from influences and the artistic circles of the time.

Af Klint (1862-1944) was largely ignored during her lifetime and she even admitted to this, taking note that her contemporaries were not quite ready for her art. It took decades for the established art world to recognize her unique expression. The Los Angeles County Museum of Art’s survey “The Spiritual in Art” (1986), curated by Maurice Tuchman, significantly contributed to resurrecting af Klint’s works, resituating them in conversation with her contemporary peers, about mysticism and the spiritual quality of the abstract. A New York Times critic who reviewed the Los Angeles exhibition described her in a review as “a previously unknown Swedish artist whose somewhat mechanical abstract paintings and drawings of organic, geometrical forms were marked by Theosophy and Anthroposophy.” Her first solo show took place in 1998 in Helsinki.

Helena Blavatsky (1831-1891) and Rudolf Steiner (1861-1925) were the leading figures behind the establishment and popularity of the Theosophical Society and Anthroposophy which deeply influenced af Klint and other artists at the time. The two movements borrow some ideas from Gnostic and Neoplatonic monism, that all is one, evidenced in their belief in the absolute and of a single emanation of the divine, as well as from Hinduism. Spiritual elevation and transcendental experiences are pursued through ecstasy and insight. Their network relies on a system of brotherhoods not unlike Freemasonry and integrated elements of the occult. The eight watercolors on show at the David Zwirner Gallery were the artist’s gift to Steiner.

Interest in the Swedish artist remains strong. More recently, a 2019 German movie retraced her life and practice. And at last, the long-awaited publication of a seven-part catalogue raisonné will finally be published mid-2022. A late blooming for a mesmerizing mind and talent. 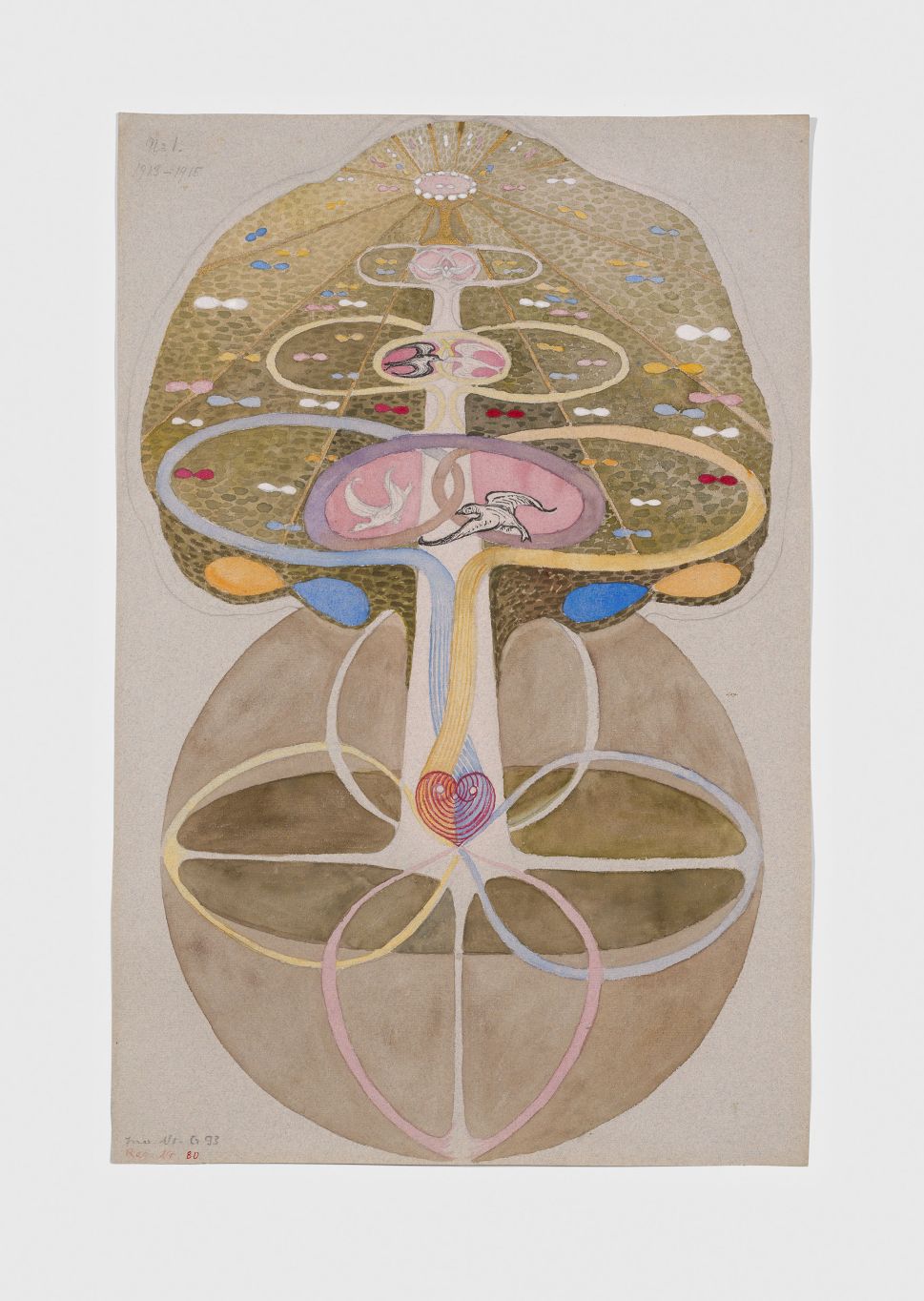