Roberto Bentivegna felt an immediate relationship to the real-life story in Ridley Scott’s latest movie, House of Gucci. The film, based on the book The House of Gucci: A Sensational Story of Murder, Madness, Glamour, and Greed by Sara Gay Forden, had been in development for several years when Scott and his wife and producer Giannina Facio approached Bentivegna to pen a new version of the script.

“I had written something else they had read—that was completely unrelated,” Bentivegna recalls, speaking over Zoom from London. “They’d been trying [to make] House of Gucci for so many years with a lot of different writers and it never came together. I have a personal connection to the story because I grew up in Milan and my mother is a fashion designer. I used to play two doors down from where Maurizio was murdered. I knew the story very well. It was one of those kind of perfect marriages of ‘Here’s a job’ but also it never felt like a job. This felt I had nothing to lose and I could really go crazy with it and do something very unique and very different.”

House of Gucci follows Patrizia Reggiani, played winningly by Lady Gaga, as she meets and marries Maurizio Gucci (Adam Driver), becoming part of the Italian fashion brand’s family dynasty. After the marriage crumbles Patrizia hires two men to murder Maurizio—an act of violence that actually took place. It’s a stranger-than-fiction tale, with a lot of dramatic players and events, but Bentivegna, who is co-credited for the screenplay with Becky Johnston, felt the best way in was to showcase the story from Patrizia’s point of view.

“The touchstone I thought of was Sunset Boulevard and I thought of that movie specifically in terms of point of view because it’s such a strange film,” he explains. “The character you remember is Norma Desmond, but it’s actually William Holden’s movie. He takes you through the story, with his voiceover and everything. So I thought about twisting that dynamic around and having Norma Desmond essentially be the protagonist in what would be this movie. That was a very helpful through line. And the other thing was making it a fashion gangster movie, in a way. Patrizia’s almost like a Tony Montana—this big gangster who just doesn’t give a fuck and bulldozes her way through thirty years. And obviously, in the end, she bulldozes over herself.”

To write the script, Bentivegna did extensive research beyond Forden’s book. Because the screenwriter speaks Italian, he was able to go into the archives of Italian newspapers and read what people had written about the family in the 1970s and 1980s. “It’s just interesting to see how the opinion changed over the years,” he notes. “Obviously now we think of Gucci as this incredibly luxurious, extravagant brand. But to read about the family in the ‘70s, with Aldo [Gucci] being arrested for tax evasion and Paolo [Gucci] trying to start his own line and fucking it all up. People were writing about it in a way that was almost like tabloid fodder.”

Bentivegna elected not to speak with any members of the Gucci family because he wanted to avoid feeling like he was forced to serve their bias in any way. He sees his script as a work of “creative speculation” rather than an exact history. The goal was to dramatize rather than sensationalize, although Bentivegna confirms that much of the film is based on truth.

“I think, generally speaking, I was quite faithful,” he says. “There were a few things I changed. For example, Guccio Gucci had three sons and a daughter, and for dramatic purposes I thought it was a much cleaner thing to have Rodolfo, played by Jeremy Irons, and Aldo, played by Al Pacino, and give them two sons and created that father/son dynamic. Little things like giving Maurizio and Patrizia one daughter instead of two. In real life there’s two daughters, but I’m an only child and I always felt like when my parents argued it was particularly heavy. You felt that weight of the family stress on your shoulders, so that really helped me.”

Although Bentivegna is fluent in Italian, the screenplay was written solely in English. Any additions of Italian, as well as the actors’ Italian accents, were creative decisions made during production.

“I wanted it to sound as witty as possible,” Bentivegna explains. “If you write for someone who doesn’t speak English as their native language obviously they’re not going to be as witty as somebody whose first language English. So I didn’t want to write in broken English because that would be a weird thing. I just wrote it as though they were English speaker. I left that choice to Ridley and the actors to figure out where they wanted to go with it.”

Another creative choice made on set was Lady Gaga’s now iconic line “Father, Son, and House of Gucci,” which blew up on Twitter when the film’s trailer first dropped. Gaga actually ad-libbed the line on the day.

“I have to admit I didn’t write that,” Bentivegna laughs. “I wish I could say I did! I think in the script she just crosses herself. But that’s the genius of having someone like her. She’s a genius. She can come up with these things and make it look easy. Jared [Leto] also had quite a few contributions. His line about shit and chocolate, when he says ‘Trust me I know the difference.’ Honestly, they were very faithful to my script, which is wonderful. I only take it as a compliment that they went off and riffed and felt comfortable with it. It means they were inspired by it and they had all these ingredients they could cook with.”

In many ways, House of Gucci is a character study of Patrizia, who finds herself immersed in the Gucci family drama and soon begins to meddle. It was important for Bentivegna to take a balanced approach to her characterization—the audience needs to like her enough to follow her through the story, but she’s also a murderer.

“I remember reading an interview with Paul Schrader about Taxi Driver that always stuck with me,” Bentivegna says. “He was talking about how if you put yourself in the shoes of a character for maybe 30 minutes in a movie, if it’s told from their point of view, something happens with the audience where they almost transcendentally go into that person’s mind. Inevitably, they’re attached to them emotionally. I always thought about that. Obviously this is not as much of a first-person perspective as Taxi Driver, but there is an element of seeing the world through her eyes. You are with her the whole way. With her, it was about giving enough motivation and humanizing her without falling into cliches about sympathetic protagonists. She is who she is. But it’s a question of understanding why she did what she did and making it relatable in some way.”

Following his experience on House of Gucci, Bentivegna is adapting Jo Nesbo’s novella The Jealousy Man into a feature for Amazon, with Will Oldroyd, best known for helming Lady Macbeth, attached to direct. Working on House of Gucci has opened a door for the screenwriter, both professionally and creatively, and he feels like he’s learned how to bring his own experiences into his writing in a way that makes them universal.

“That idea of ‘write what you know’—I was always a little skeptical of that,” Bentivegna reflects. “It’s so limiting. It’s kind of sad to think you can only write about the things you know or have lived. It doesn’t feel very creative. But in this case that really was true because my connection into the story and the world and its specificity was such a big deal. Even the moment when Maurizio feeds Patrizia the hot pocket in front of the Duomo—those are called panzerotti and I used to eat them with my dad every Sunday. It was a ritual. Putting these details in a story, in a script, it gave it a personal connection. In this context, the write what you know thing really does apply. I’m not sure if it applies to everything. You can totally write something you know nothing about and learn along the way, but in this case it’s proof of that pudding.”

House of Gucci is now playing in theaters. 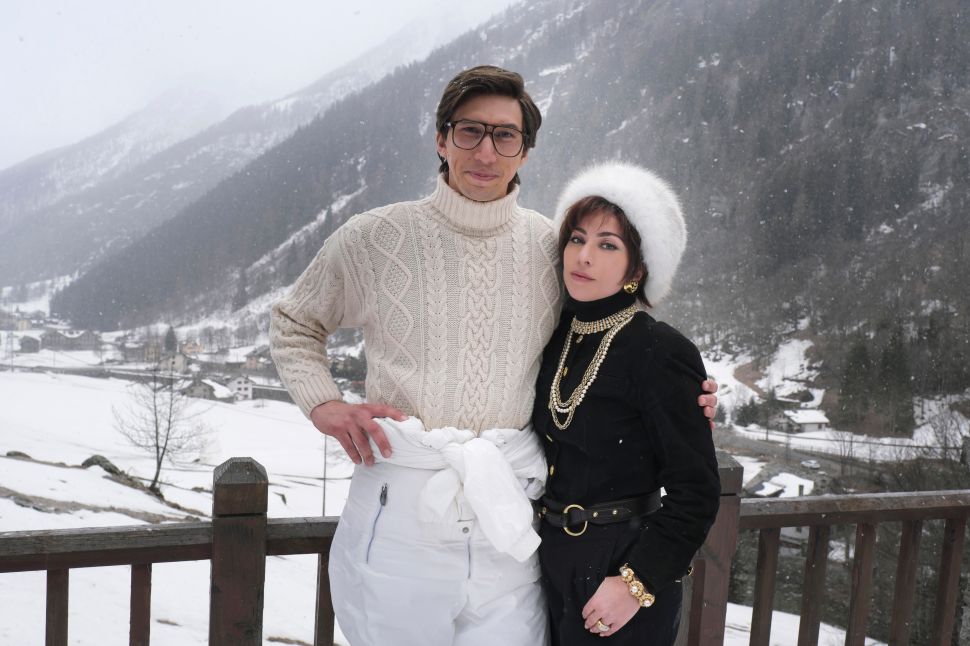