Juicy, extravagant, glamorous, decadent and a crowd-pleasing carousel of euro-trash camp, Ridley Scott’s sordid saga about the rise and fall of the Gucci fashion empire has something for everybody. While the camera in House of Gucci pokes its way through the red and green stripes of the billion-dollar Gucci trademark and uncovers a multitude of true crimes behind the precious leather handbags and patent leather loafers that made the label a household name, the movie reveals the Gucci dynasty as the most vicious, dangerous and ruthless Italian family since the Borgias.  Like it or not, see this lavish soap opera and you’ll know you’ve been to the movies.

Told with all the pomp and madness of grand opera, it’s actually more Puccini than pulp fiction, and although the narrative is available for perusal as an internet and tabloid staple as well as a true crime book, it’s all so complex and convoluted that a soupçon of background may be necessary before you try to sort out the details.  The house of mode and vogue was the initial brainstorm of two Gucci brothers, Rodolfo (Jeremy Irons) and Aldo (Al Pacino), who each owned 50 percent of the business.  When Rodolfo died in 1983, he left his half of the stock to his handsome playboy son Maurizio (Adam Driver), a bookish law school student more interested in girls than business.  To the horror of his Uncle Aldo, one of the girls was a crude, ambitious Milan social climber named Patrizia Reggiani (Lady Gaga, unrecognizable in Gina Lollobrigida’s old wigs).  They meet cute when she writes her phone number on the windshield of his motorcycle with pomegranate lipstick.  The kohl-lidded eyes of this lump of Italian cheesecake detect a future papered with millions of lire, so she hatches a plan to marry the naive Maurizio (easy) and orchestrate the family fortune to guarantee her an endless stock of breast-heaving peasant blouses (not so easy, since Uncle Aldo and his fat, moronic and totally corrupt son Paolo have their own plans for bilking Gucci out of its profits).  From there, hate at first sight grows into a declaration of war, and an all-star cast risks lead poisoning from chewing the scenery like pizza. (Pacino screeches and bellows while Jared Leto, as his son Paolo, makes a controversial, scene-stealing bid for another Oscar.) They go to prison for fraud and tax evasion, Maurizio dumps Patrizia in 1985,  she vows to seek revenge while his bad business decisions plunge the company into bankruptcy, and colludes with her psychic best friend Pina (a wasted Salma Hayek) to hire a pair of killers to murder Maurizio on the steps of his office in Milan.  Labeled the “Black Widow” and sentenced to 29 years in prison, she was released after 16 years and today she is seen every day in Milan shopping in oversized sunglasses with her pet macaw on her shoulder.

What a role for Lady Gaga — she plays it to the hilt demanding attention and generating palaver, good and bad, from sea to sea.  All eyes are on Gaga as she turns the role of Patrizia into a wild collection of odd, mismatched elements of contradiction.  I can only wonder how many people were assigned the task of covering up her tattoos, but they don’t show (and God knows she shows everything else).  She is ugly and beautiful at the same time, small in stature but big in rampant volcanic passion.  Her accent is anything but Italian, untraceable but vaguely reminiscent of everywhere from the Bronx to Vladivostok.  Like the film itself, she’s a weird combo of diamonds and pepperoni, and like the film itself, while she’s not exactly likeable, she’s entirely unforgettable. 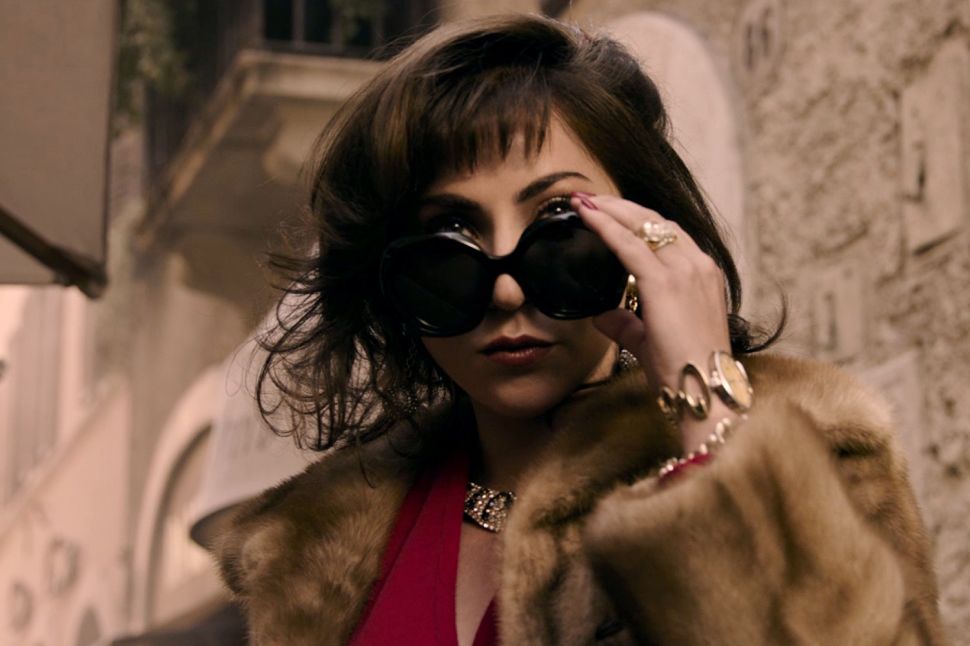