This week, airports in Glasgow, Scotland are packed with private jets (like Davos in January) as world leaders and business magnates gather in the historic city for the United Nations Climate Change Conference (COP26) to discuss the urgency of climate change and how to save Earth.

Despite their anything-but-environmentally-friendly personal lifestyle, American tech moguls at the international summit are pledging huge donations to help save the environment. On Tuesday, Amazon founder Jeff Bezos announced that he will contribute $2 billion out of his $10 billion Bezos Earth Fund to restoring natural habitats and transforming food systems.

The pledge came on the heels of a $1 billion grant Bezos announced in September to support natural conservation efforts. “Together, this $3 billion in pledges will drive a new threefold nature agenda for the Bezos Earth Fund, focused simultaneously on conservation, restoration and food transformation,” Bezos told attendees at the climate summit on Tuesday.

The former Amazon CEO, who also owns the private space exploration company Blue Origin, said he was reminded of how beautiful and fragile nature is when flying to suborbital space in a Blue Origin rocket in July.

“I was told seeing Earth from space changes the lens through which you view the world, but I was not prepared for just how much that would be true,” he said. “We must conserve what we still have, we must restore what we’ve lost and we must grow what we need to live without degrading the planet for future generations to come.”

Also on Tuesday, Bezos’ good pal Bill Gates announced that his foundation has pledged $315 million in grants to the CGIAR global agriculture research partnership to help hundreds of millions of smallholder farmers in low-income countries adapt to a surge of climate threats that have exacerbated hunger and poverty. With this latest contribution, the Gates Foundation has donated a total of more than $1 billion to CGIAR. (CGIAR formerly stands for Consultative Group for International Agricultural Research.)

The grants will focus on farmers in countries that account for a small percentage of global carbon emission but are most harmed by the consequences of global warming. “Sub-Saharan Africa, where most people work in agriculture, accounts for only 4 percent of global greenhouse gas emissions. Yet less than 2 percent of global public funding for climate-related work targets the needs of smallholder farmers. Most of this funding is focused on reducing emissions,” the Gates foundation said in a press release on Tuesday.

While these missions all sound compelling, observers on social media found it hard to reconcile billionaires’ philanthropic work with their excessively wasteful lifestyle.

“COP26 is a load of hypocritical garbage,” British politician David Kurten tweeted on Saturday. “The 30,000 climate alarmists flying in on their private jets and staying in luxury hotels while telling everyone else to give up meat, cars and gas boilers can stick their New World Order where the Sun doesn’t shine.”

COP26 is a load of hypocritical garbage. The 30,000 climate alarmists flying in on their private jets and staying in luxury hotels while telling everyone else to give up meat, cars and gas boilers, can stick their New World Order where the Sun doesn't shine. pic.twitter.com/laXBI6bWC4

Every world leader or dignitary that arrives to @COP26 by private jet is an eco-hypocrite. Fact.

Last week, Bezos and Gates were seen partying together for Gates’ 66th birthday on a Mediterranean beach, with their respective superyachts anchored nearby. Superyachts and private planes are notoriously bad for the environment. The type of superyachts Bezos and Gates own (or rent) emit about 7,000 tons of carbon dioxide per year, or 19 tons per day, according to Fast Company.

A spokesperson for the Bezos Earth Fund said Bezos’ private jet “uses sustainable aviation fuel and offsets all carbon emissions from his flights.”

This article has been updated with the Bezos Earth Fund’s statement in the last paragraph. 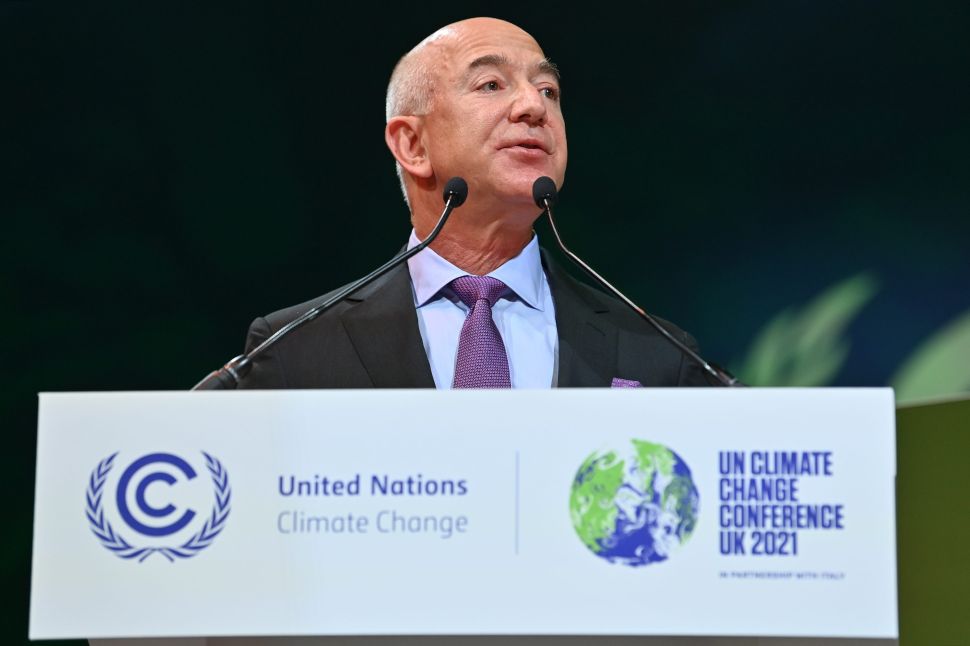