For Krysty Wilson-Cairns, true horror isn’t ghosts or monsters; it’s toxic men. The screenwriter brought that sensibility to Last Night in Soho, which she co-wrote with director Edgar Wright based on a story he had been developing for more than a decade. The film, now in theaters, grapples with the idea that men abusing positions of power in show business is a deeply ingrained problem that continues to exist, but the psychological thriller never bashes the viewer over the head the message. Instead, Wright immerses the audience into a vibrant take on 1960s London, where all that glitters is, well, probably not gold.

The film follows Eloise, an aspiring fashion designer played by Thomasin McKenzie, who arrives fresh in Soho to attend art school. After struggling to find her place with her classmates in the university dorms, Ellie rents a room in an old house from a landlady, Ms. Collins (played by the late Diana Rigg). As she drifts to sleep, Ellie mysteriously finds herself transported back to the 1960s, where she embodies an aspiring singer named Sandie (Anya Taylor-Joy). The line between the past and present begins to blur, and it eventually becomes clear that Sandie’s life is not one to aspire to.

Wright and Wilson-Cairns wanted the story to feel surprising and unnerving, particularly as the events take a terrifying turn. We spoke with Wilson-Cairns a week before the film’s release to discuss how the screenwriters conceived of the film’s characters and structure, and how much of their own experience came into the narrative. The screenwriter, who was previously nominated for an Oscar for Best Original Screenplay for Sam Mendes’ 1917, offered a glimpse at the creative process behind the film.

How did you and Edgar Wright first connect?

A few years ago, maybe in 2015 or 2016, Sam Mendes introduced us as friends. He thought we would just get on. And he was right—we got on like a house on fire. And one of our first meetings we were having drinks in Soho and we were actually drinking opposite the strip club I used to live above. I just happened to mention, “Oh, I used to live up there. It was really noisy.” And I used to work at the Toucan bar, which is the bar in the film. Edgar was like, “So you’re a Soho person. I’m a Soho person. I have this idea about this young girl moving to Soho and this ghost story, can you take me on a night out to all the skeezy basement bars?”

So we went on this pub crawl and ended up in this basement bar called Trisha’s, which is a fine establishment. In the corner of that bar, a few drinks in, he told me the story of Last Night in Soho. I remember sitting there, holding on to the table, just like, “Be as sober as possible!” I was absolutely transported by it. And then about nine months after that he was in town wrapping up on Baby Driver and he phoned me. He was like, “Do you remember that story?” And I hadn’t stopped thinking about it. I live and work in Soho. I walk through it every day. It really played in my mind. So it was a very quick and easy yes when he said “Do you want to write it with me?”

How long did it take you to write the script?

The first draft took us about six weeks. He had the story all worked out—what he had told me in the bar. And there was stuff to add to that and stuff to build on and characters to really get in to. But he had such a vision for it and such an understanding of it. As soon as he lit that match it was really easy to then progress.

Did you bring your own experiences in London into the film?

Yeah. You know, it’s quite funny, I watched it with my mum in Venice and she kept laughing because there are loads of little nods. My grandmother was a seamstress and she used to put my mum in newspaper dresses. The photograph of the mum and the gran outside the Criterion bar is from one of my mum and gran outside the Criterion bar. There’s all kinds of in-jokes and nods. And then, of course, the Toucan.

Edgar and I were both very young when we moved to London and felt drastically out of the loop and left behind. And not rich enough, but also not poor enough to be cool as well. That weird lower middle class country mouse feeling. He went to art school and I went to the film school, and had those experiences of being really overwhelmed and like you don’t know anything. All of that really resonated with me.

Just to confirm: the Toucan is a real bar in Soho.

It is. And [people] should go there. It’s very good Guinness. I go there a lot myself, so they can see me and ask me questions if they want. My office is on Greek Street, right around the corner, so literally I’m always there. And I love the owners of the Toucan, Colin and Carol. Carol, who is in the film, used to date the drummer for the Rolling Stones. She had the wildest ‘60s and used to tell me about it. I actually took the two of them to the premiere in London—they were my dates to it—and they had Toucan pins in their lapels and they were telling everyone “Come by the bar.” So go by the bar!

What was the process of ensuring your two female lead characters were complex and not archetypes?

With any character it’s about having a sense of authenticity to them and reality. Especially in movies like this in the ‘60s, which were written by men and directed by men and solely made by men, they didn’t ever feel honest to me. They didn’t feel like someone I knew or a version of me. That’s why we infused so much of ourselves into Ellie and into Sandie. We were trying to make them feel real and go on journeys that you believe people would go on.

Originally, in the treatment, all the ‘60s scenes were silent, with music but no dialogue. And my first note to Edgar was “I think we need to see and hear Sandie speak.” With obsession, especially with female-on-female obsession, it’s not about how someone looks. It’s about how they are, how they act, if they’re funny—those kinds of things. So [it was about] making Sandie someone who Ellie would want to be. I remember, very clearly, being 18 and wanting to be cool. I was desperate. And looking at people who were cool and thinking, “What is that?” Eventually you realize it’s within you, but it takes time.

So building that character of Sandie was really fun because it was about “Who does Ellie dream of being?” You see Sandie, in those first few dreams, as someone you just want to be and to be best friends with.

Was it difficult to get the pacing of the story right, especially as the tone starts to get more horrific?

The key idea that we added is the audition scene [for Sandie]. It wasn’t in the original story. That just gives you a bit of extra time to think, “Oh, maybe we are going to go on this wonderful adventure. Maybe this isn’t going to be a horrible, tragic and terrifying tale of a young girl’s experience in the ‘60s.” Audience-goers are so cinema literate. They understand structure now in a way where probably, for the first time ever, everybody’s got a grasp of it and they understand what the three acts are. And as a writer that’s really fun because you get to fuck with it.

In a traditional three-act structure, there would be three dreams. There would be the first dream, there would be the dream where it turns and then there would be the bad dream. So messing with that is that you add that audition dream and it comes in at a time when usually the film would be turning, so you get this false idea of what is actually going on. It creates a longer first act, which starts to throw the audience. In a psychological thriller, if you can use structure like that, it’s really fun.

As the screenwriters, did you determine whether Ellie is dreaming or actually going back in time to the 1960s?

Yes. We know all the logic of it. That was one of the first discussions we had: Is she actually gifted or does she have a mental illness. We both believe that Ellie is gifted. Much like Edgar’s mom, who watched Last Night in Soho and thought it was a documentary about her, she is very attuned to the spirit world. I’m a skeptic about ghost, I’m sorry to say, but Edgar isn’t. And Edgar’s mom really isn’t. She sent me a list, which was called “Spooky goings on,” which was so cute, and it was all the times in her life where she’d seen a ghost or felt a presence. And then doing the research and finding the story behind that sighting. It’s undeniable that there’s something else out there. So Ellie does really believe it. I really believe she has a gift.

Is the film making a specific commentary on the way men treat women?

Absolutely. When you write a horror film you should write something that truly scares you. To me, the idea of toxic masculinity and how women were treated in the 1960s and how they continue to be treated today is so problematic and truly terrifying to me. Women don’t necessarily get to see that on screen in a very empathetic way. When Edgar first told me the story I knew that was innate in it. I could understand he’s a very empathetic director who actually works with a lot of women—all his producers are female. So I felt very liberated in that writer’s room to then bring my own experiences in.

We would write stuff and he’d be like, “What’s the worst pick-up line that has ever been said to you?” And it’s in the film: “My dick died, can I bury it in your ass?” And the stuff the taxi driver says [in the film], over the years in London, all that’s been said to me. I think it’s really important to put that in film in a way that people can resonate with and understand.

Is the ending of the film the same from when Edgar first told you the story? 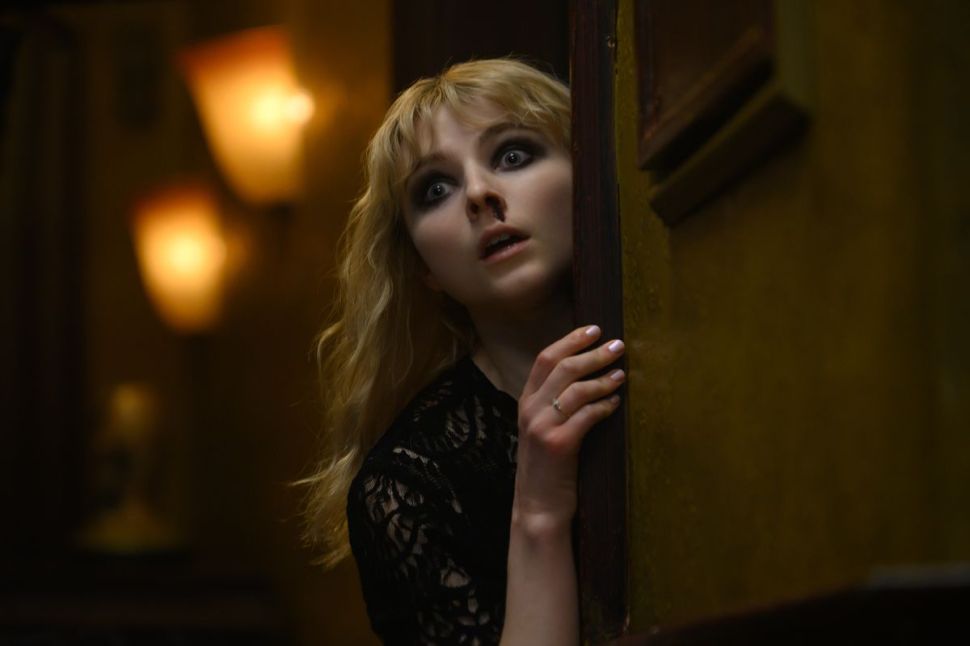