After a trio of films set in the San Fernando Valley—Boogie Nights, Magnolia and Punch-Drunk Love—writer-director Paul Thomas Anderson returns to the ’70s time period of the former and to his native locale, for the nostalgia-laced Licorice Pizza, after nearly 20 years away. His recurring themes of living on the edge of showbusiness take shape in fifteen-year-old Gary Valentine (Cooper Hoffman), a middling teenage actor with some TV credits who oozes confidence in his other endeavors, including his romantic ones, and who begins pursuing twenty-something Alana Kane (Alana Haim), a photographer’s assistant who writes herself off, believing she’s well past her professional prime. The story that follows is occasionally uneven, but blossoms in strange and fascinating ways. It’s anchored by the aesthetic meld Anderson has perfected in recent years, between the dreamlike and the disturbing—and in this case, the innocent and the thornily intricate—and by a pair of truly stunning debut performances that bring to life two of the most fully-formed, deeply complicated Hollywood characters in recent memory.

Anderson, who also shares cinematography credit (alongside Michael Bauman), evokes much of his work with cinematographer Robert Elswit, who shot all three of Anderson’s prior San Fernando films. He paints the Valley in warm and shadowy hues on 70mm celluloid, crafting a sharp visual contrast that highlights the characters’ every physical detail, down to Gary’s hormonal zits, whilst wrapping light around them in ways that speak to their darkest and brightest dreams. Lens flares pierce the corners of the frame whenever possibilities emerge—whether sex, romance, stardom, or one of Gary’s many get-rich-quick business opportunities, into which Alana is eventually roped—but these are soon replaced by harsh shadows which clash with the film’s upbeat Classic Rock soundtrack, creating a dissonance specific to navigating teenage boyhood and burgeoning sexuality. One scene in particular feels sweet, ugly, dangerous and nauseating all at once, as Gary’s shivering teenage hands approach Alana’s breasts after she falls asleep comfortably next to him on a rickety waterbed, but he pulls back at the last second.

Both characters live at the precipice of horrendous judgement, but they remain wrapped up in their personal and professional fantasies (the presence of which is alluring, and the brief absence of which is immediately dispiriting). Alana, who claims unconvincingly to be twenty-five—perhaps she’s younger and wants to ward off Gary’s advances, though it’s just as likely that she’s touching thirty—is the youngest of four daughters (a personal touch from Anderson, who grew up in a household with three sisters) and is the least successful among them. Her frustrations with her inertia lead to both a fiery temper and a desire to seek fulfillment wherever she can find it, even if that happens to be the attention of a kid nearly half her age.

She doth protest, specifically because he’s a high schooler, but Gary’s flirtatious compliments become akin to a drug. Haim plays Alana’s highs with a wondrous rapture, and her pursuit of her next fix with an erratic self-loathing, which she lets loose in the form of anger towards her flimsy inner circle (her family, mostly—played by Haim’s real sisters and parents—though Gary soon enters her orbit and her crosshairs). Around most others, she keeps it under a tight and highly pressurized lid; watching Haim navigate other people, as well as herself, is probably the second most exciting thing in Licorice Pizza. The first is watching Alana drive a delivery truck running low on gas, a sequence that’s hilarious in its calm construction, yet more thrilling than any recent Hollywood action scene thanks to Haim’s anxious performance (and thanks to editor Andy Jurgensen’s precise cuts that find the perfect balance between farcical and nail-biting).

However, the film’s highlight is undoubtedly Cooper Hoffman (son of the late Phillip Seymour Hoffman, with whom Anderson collaborated several times). His Gary is a suave and pompous go-getter who moves from one sales enterprise to the next—starting with a waterbed fad that he assertively bullshits into existence. But what Hoffman and Anderson really understand about young actors is the way they’re always on. Everything about Gary is a performance aimed at convincing or seducing, from the way he chats up older women, to the way he shuts down conversations he doesn’t want other people to have, to the way he charms older customers and naïve younger cohorts alike with his schemes. Where Alana’s personal and professional dead-ends lead her to a U-turn, towards younger friends and coworkers, the wide-eyed Gary navigates roadblocks by turning towards even bigger entrepreneurial ventures. Where Alana remains in arrested development, Gary is forever champing at the bit, eager and impatient to be treated like an adult (and like a celebrity).

They meet in the middle, and though they don’t enter a relationship, physically or otherwise, sparks and jealousies fly throughout the film’s 2 hours and 13 minutes, and Alana’s self-esteem corrodes at the very thought of Gary dating someone more age appropriate—despite it being her own suggestion to begin with. She displays an awareness of her actions and feelings towards Gary but gets caught up in them regardless, portending a series of self-destructive behaviors that are funny as they unfold, but leave gaping emotional wounds once in her rearview.

Upon realizing that she might want more out of life, she finally switches gears, and the film begins to introduce a series of strange and flashy older characters embedded within showbiz, some of them real, and each of them played by known faces who show up looking significantly more tanned and weary than Alana, who’s often as pale as her teenage compatriots, and wears much simpler clothing than the cameoing celebrities. The muted appearances of Alana, Gary and the other teenagers, and their naturalistic performance styles place them within a discernible, tangible reality. But when the likes of TV star Jack Holden (Sean Penn, playing a version of William Holden), madcap director Rex Blau (Tom Waits) and real-life producer Jon Peters (Bradley Cooper) enter the fray, scenes begin to take on a surrealist bent and become coated with a thick and viscous layer of artifice.

Alana is drawn to this rich and garish adult world of show business, but it isn’t as drawn to her, and so both her desires and her frustrations become doubly aimed at Gary. She especially takes potshots at his (understandable) lack of worldliness, but only in moments when she feels the need to remind herself that she’s an adult—that she’s better than him. Gary, in turn, takes aim at even younger kids, like his little brother and his friends, who he conscripts as delivery men and salespeople. Age and the power dynamics therein are a central fixture of the film, with both lead characters trying desperately to fill emotional gaps by exerting influence and seeking adoration wherever they can.

As much as Licorice Pizza mirrors Boogie Nights in its setting, time period, and tale of teenage stardom, the Anderson film it most closely resembles is Phantom Thread. Both works zero in on co-dependent, mutually destructive dynamics that remain enchanting—realistic relationships in which love and abuse co-exist, and even overlap. Alana and Gary, however, are painted with a more wistful brush—theirs is a sweeping tale of summer fun, rather than withholding frigidity. Where Phantom Thread’s Daniel Day-Lewis shed his character’s hardened exterior over time, the young Hoffman sheds Gary’s all at once, when the character is falsely arrested and Alana runs to his aid, in an early scene that swiftly ushers the film—a fairly good one up to that point—through the gates of greatness. It’s devastating and exciting, and it briefly turns the debonair Gary into a scared little boy, a vulnerability he begins to display more frequently, and with which he wrestles, from that point on (to say nothing of the fact that it’s the first of several running scenes that rival the grin-inducing thrill of watching a sprinting Tom Cruise).

The film is adept at getting right in the middle of complicated dynamics, at least as far as Alana and Gary are concerned, and what lines it does or does not cross vis-à-vis their age gap. There’s only so far Anderson goes with their physical intimacy; their thorny emotional intimacy is what sings. These lines are often drawn by Alana herself, before she promptly hops and skips around them while searching for ways to fill a lingering void. The film does, however, briefly feature a secondary relationship meant to highlight marital complications—or some other idea that never fully coheres—in the form of Gary’s middle-aged white acquaintance, the real-life restaurateur Jerry Frick (John Michael Higgins), who addresses his Japanese wife (Yumi Mizui) using a disconcertingly racist accent, though this comes off less like commentary (it was supposedly based on the experiences of Anderson’s Japanese mother-in-law) and more like a poorly thought out running gag that only serves to distract from otherwise masterful work. Anderson claims the goal here was honesty about the era’s orientalism, but its inclusion feels awkwardly tacked on, and not remotely as effective as the orientalist ideas embedded more casually into the story, like the “Arabian” waterbeds Gary and Alana sell to their customers as futuristic and “exotic.”

Anderson is, ultimately, as adept a salesman as his characters, imbuing fundamentally simple ideas—nostalgic navel-gazing, childhood fantasy and adult disappointments—with an energy that makes them shimmer. In tandem with Hoffman and Haim, who no doubt have long careers ahead of them, he makes unassuming scenes of conversation and minor disagreement feel majorly stifling, magnifying the characters’ subtle self-doubts by drowning their close ups in soft-focus, forcing them to peek out from behind their self-assured façades. He also frees them from this oppressive fabric, yanking his camera off its tripod to follow them mid-sprint, or in moments of quiet confrontation, or just as they begin to get swept up in their ill-conceived plans. The setting may be a fixed point in the past, but the film charges forward with life and vigor.

Gary and Alana’s stories harken back to both unfettered teenage optimism and the burdensome failures of early adulthood, which clash like summer waves against a jagged cliffside. These opposing forces—one fluid and extending endlessly, the other with sharp, unwavering edges hardened over time—evoke memories of both the freeing adrenaline of a plunge taken hand-in-hand, and the danger that lies below.

Licorice Pizza is the moment between the leap and the impact—the feeling of weightlessness even as you plummet. 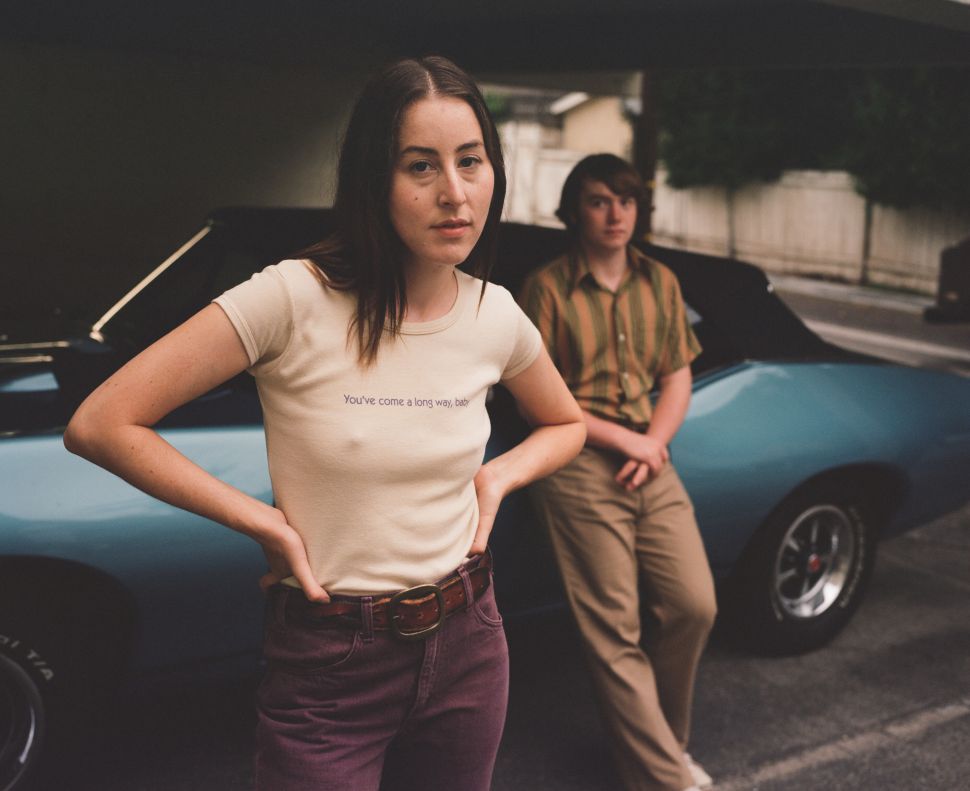