It must be daunting to write music for Orpheus to sing. Monteverdi, Peri, Rossi, and Caccini have all taken their turns, penning arias for this legendary musician in their distinguished operas. Now, composer Matthew Aucoin is sharing a new adaptation of the beloved myth, but the opera’s title alone should let audiences know it is not Orpheus who will be at the center of this tale.

Eurydice is based on Sarah Ruhl’s 2003 play of the same name. Melancholy but playful, Ruhl’s reimagining tells the myth from the doomed heroine’s point of view, creating what Aucoin calls an “entirely different story.” Now, the two MacArthur geniuses have teamed up to bring this contemporary take to The Metropolitan Opera: Ruhl authors the libretto and Aucoin composes for Mary Zimmerman’s highly anticipated production, which began November 23. Here, Aucoin—whose book The Impossible Art: Adventures in Opera comes out next month—discusses the genesis for this piece, making the God of the Underworld a high tenor, and the return of live opera.

Observer: How did you and Sarah Ruhl first meet—was it about Eurydice, or before then?

Matthew Aucoin: We met over Eurydice. To start from the very beginning, The Met had invited me to join their New Works Development program all the way back, I think, in 2013, and at the time I was still working on my first opera Crossing. It took me about two years to realize that I had to go back to the force that is the Orpheus and Eurydice legend and expand on a piece, The Orphic Moment, I had written in 2014. I wanted to expand that into a full-length opera, and when I raised this idea to The Met team as well as André Bishop, who is at Lincoln Center Theater which partners with The Met, André immediately said, “You gotta talk to Sarah Ruhl.” To my shame I didn’t really know Sarah’s writing at that time. But I checked out Eurydice and was moved to tears, and slowly but surely the opera became a more straightforward adaptation of her play because I felt Sarah’s take on the myth was not only fresh and beguiling but also I felt that she’s actually telling an entirely different story in which the myth is contained. I don’t think this is a Orpheus and Eurydice piece, I think it’s a fantastical biography of a young woman in the twenty-first century, and the myth is only one rather small piece of an entirely original story. From there, we started talking in 2015 and we pretty much just got to work.

How did the adaptation process work?

Sarah’s never written a libretto before, but I assured her that her play was already pretty close to being a libretto both in the musicality of the language and the spareness of it. It’s not like a Shakespeare play where you have to throw out 80% of the text to turn Othello into the opera Otello, so the distillation process here was much more painless as a result.

Sometimes, it feels that theater and opera can be rather segregated, and the audiences and lovers of each art form might not overlap. But Sarah Ruhl and Mary Zimmerman are such theater celebrities that it feels like your opera offers a lovely bridge between the two mediums. Is that separation something you’ve ever noticed or considered with regard to this work and who its creators are?

It makes me think of an early conversation that Sarah and I had. She had said, “Well, the play is funny at moments, is opera allowed to be funny?” And I remember thinking that was a really disastrous PR failure on the part of opera, that anyone would think that there was something inherent in the art form that kept it from being funny. You would never ask if plays can be funny because of course they are. So I wanted to invite Sarah’s energy into the field of opera. One of the magical things about her work, as she has said, is that tragedy and comedy sit very close to each other: at one moment you’re laughing and in the next you’re crying. That takes real heart, and it was really liberating for me to engage with that quality of Sarah’s work.

A few blocks south, a Tony Award winner for Best Musical, Hadestown, also looks at this famous myth. With different versions of this iconic story on two elite New York stages, it makes me wonder about the timeliness of this work, or perhaps its timelessness. Is either something you thought about in its creation?

I think the quality of this opera that feels most timely, if that is the word, is that it engages with death and loss in a very direct way. In America, in the twenty-first century, we don’t always live very close to death, or even if we do we are very good at denying that reality. Our world is shiny and sterilized. But then this past year, millions of us have come close to death ourselves or have lost someone close to us, so death is in our atmosphere in a different way, so I hope there’s something cathartic about engaging with the underworld. I think the core question that Sarah’s play asks is: What would you say to a loved one if you could encounter them in this parallel space? And so I find myself hoping that our piece serves as a portal for the audience, for anyone who’s experienced loss to engage with it in their own way.

How did you hear Hades’ voice? Often, villains are sung by basses or baritones, but Barry Banks, your Hades, is a tenor. And, to go back to Broadway, Patrick Page as Hades in Hadestown is this basso profundo. I love that Hades can be both: a tenor and a bass. I’m curious for your inspiration as to where you heard Hades’ vocal register sitting?

Yeah, operatic villains tend to have low voices. This figure in Monteverdi and Peri and Rossi and Caccini’s operas—the Hades or Pluto figure—is always a bass, but reading Sarah’s play I knew that absolutely could not be our Hades. Sarah’s Hades is a shapeshifter who appears first as a sleazy middle-aged businessman, and then as a child on a tricycle—we cut the tricycle in our adaptation—but he’s a shapeshifter. He’s absurd but also quite dangerous, so I wanted to capture both sides of that, the absurdity and the danger, and I thought of a high tenor because it’s so gobsmacking to hear a male voice living at this high altitude. I thought we could capture both the absurd and the scary through it. I want the audience to think that he’s just absurd at first, for the first five or six minutes he’s impossible to take seriously, but then there’s a moment when he tells Eurydice he has a letter for her from her deceased father. He snaps his finger, and I have the orchestra playing this white noise. It’s this moment when you realize he’s the puppet master of everything you’ve seen. A very very high tenor struck me as the right voice type to capture that.

Finally, how excited are you to experience live opera again, specifically live opera on this scale and that is your baby?

We had a really moving stage orchestra rehearsal yesterday where I felt that the Met orchestra and chorus started to really make the piece their own—to play it with a new kind of confidence. It was also the first rehearsal where we saw the staging alongside the orchestra. It was like watching a planet form out of floating gases, it’s an astonishing thing, to see so many people with such diverse expertise. It’s really humbling to see this village coming together in service of a shared goal. I’m totally thrilled. 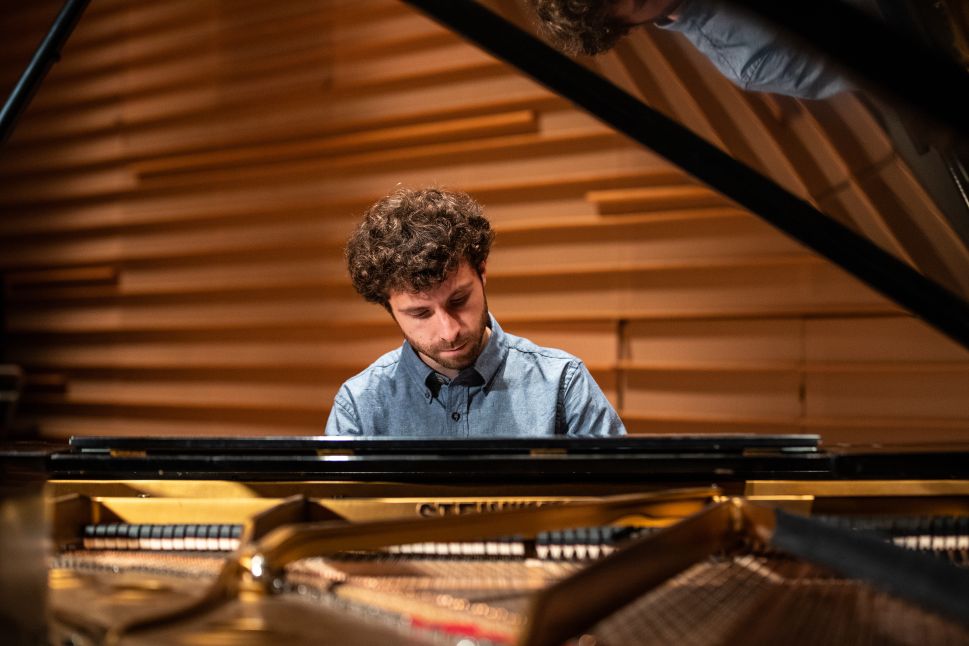