For as long as humanity has fixed their gaze upon all 29,028.87 feet of ice, rock, and snow that form Mount Everest, there has been an unyielding obsession to scale and conquer the world’s tallest mountain.

One of the first to harbor such a monumental determination was British mountaineer George Mallory, who took part in the first official expedition effort to climb Everest in 1922. After two unsuccessful attempts, he would retreat back to England, only to return two years later hellbent on planting his feet at the world’s highest peak. Whether he had succeeded in doing so has been the topic of endless debate over the last century, as both Mallory and his partner, Andrew “Sandy” Irving, would perish on the mountain. Hours before the two met their end, fellow expedition member Noel Odell is said to have seen two black dots climbing the mountain just a few hundred feet from the summit, mere minutes before it would be covered in mist. Mallory’s frozen and broken body was finally recovered on May 1, 1999, missing two items he was known to have kept on his person as he made his fateful journey: a picture of him and his wife that he planned to leave at the summit and his Kodak Vest Pocket Autographic camera.

It is that elusive camera that sets in motion the story behind French director Patrick Imbert’s (The Big Bad Fox and Other Tales) first full length animated feature, The Summit of the Gods (Le Sommet des Dieux). Based on the Jirô Taniguchi and Baku Yumemakura manga of the same name, we first see the camera on Mallory’s person in a short black-and-white prologue to the film’s main plot. Here, it is offered to Fukamachi Makoto, a Japanese photojournalist documenting Japanese exhibitions in Kathmandu sometime in the early 1990s, for a price. Believing that the stranger claiming to have George Mallory’s lost camera is nothing more than a hustler looking to make an easy buck, Fukamachi shoos him away. A few moments later, Fukamachi witnesses the hustler confronted by its owner, a Japanese man missing the top half of his left pinky and ring finger. The photographer is certain that the man is Habu Joji, a mountaineer who disappeared years ago. The short encounter leads Fukamachi to immerse himself into the world of men who would stop at nothing to reach the top of the Earth, all to find out what happened to Habu, the new owner of Mallory’s camera, the key that could perhaps solve mountaineering’s greatest mysteries.

The film’s story, as in the manga, ping-pongs between Fukumachi’s increasingly obsessive search to both learn and understand Habu and the mountaineer’s journey from overly competitive prodigy to crestfallen recluse. Imbert, along with his co-writers Magali Pouzol and Jean-Charles Ostorero, have done a satisfying job paring down Yumemakura and Taniguchi’s 1,500 page manga into a sleek and streamlined 90 minute story. This exorcised many of the manga’s side plots, yet maintains the story’s considerable range, which stands apart from your average sports movie.

The story of both journalist and subject is strong enough to warrant a recommendation, but what propels this film to wonderful and even majestic heights, is unsurprisingly the visuals. Imbert and his team of animators have gone to great lengths to both showcase the immaculate beauty of Everest and the fictional mountains Habu climbs, but also the skill and almost superhuman endurance needed to reach their highest points. Even when Habu and Fukumachi are on the ground, it’s hard not to be impressed with the visual splendor on display, the exquisite use of depth of field, lighting, and composition, all done to further immerse us into the story and locations. If you are fortunate enough to live in an area that is showing the film on a large screen, I would implore you to do so. Even the most acrophobic of viewers may find themselves understanding why some risk their lives to reach pinnacles humanity was never supposed to intrude on.

Even with the world’s largest streamer behind it, Summit of the Gods may not find an audience beyond those of us who truly seek out adult-skewing. It would be a shame, because it is one of the truly great animated films this year, one that now places Imbert alongside fellow countrymen Jérémy Clapin (I Lost My Body) and Rémi Chayé (Calamity) as part of a new generation of French animation talent that is delivering high quality animated projects in both story and style.

The Summit of the Gods is now playing in select theaters and will arrive on Netflix November 30. 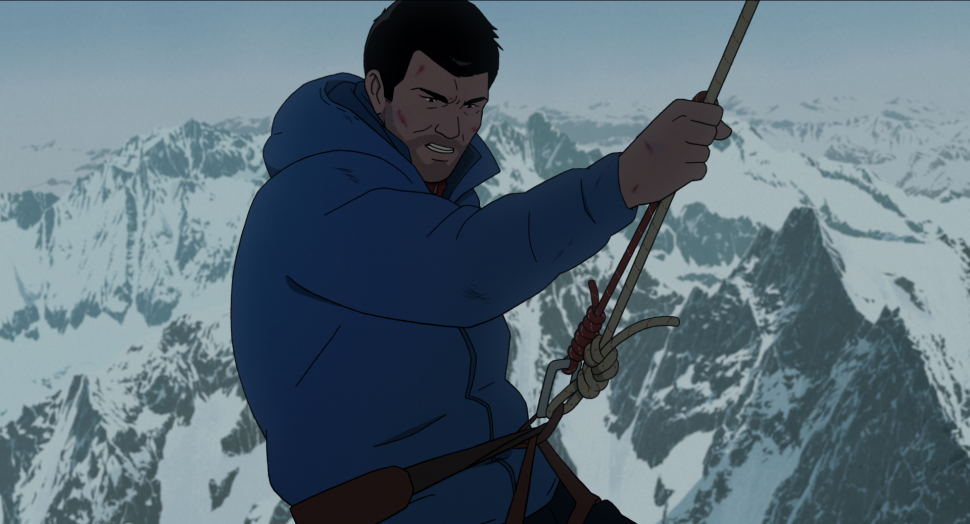