A few years ago my friend was getting married in Margate, a small English town by the sea that houses the Turner Museum. In the cozy damp living room, I sleuthed through the bookshelf. Tallest among the old gray volumes stood the Complete Works of George Orwell, a marker, I’ve come to learn, of a certain kind of British intellectualism. As Rebecca Solnit notes in her new book, Orwell’s Roses, Orwell has been claimed by many political parties. Nearly every year since 2017, 1984 has topped bestseller lists. His work is read either as a staunch defense of socialism or a harsh critique of socialism’s less beloved figures. Either way, his critique of Stalinism is often read as a defense of nationalism.

Orwell’s Roses shifts lyrically between Orwell’s life and a history of roses. Solnit refers to the structure of the book as “rhizomatic.” Through Orwell’s hopeful gardening, she weaves Lenin’s ill-fated lemon trees, colonialism, and Tina Modetti’s participation in the Spanish Civil War.

To consider Orwell a nature writer may sound, on the face of it, ludicrous. To modern readers he is the author of such worn-out high school classics 1984 and Animal Farm. But consider his essay, “Some Thoughts on the Modern Toad:”

“Before the swallow, before the daffodil, and not much later than the snowdrop, the common toad salutes the coming of spring after his own fashion, which is to emerge from a hole in the ground, where he has lain buried since the previous autumn, and crawl as rapidly as possible towards the nearest suitable patch of .”

Annie Dillard would be clamoring for such a sentence—and yet, here it is in the politically crystalline work of Orwell. The same writer who argued everything he wrote after 1936 was “AGAINST totalitarianism and FOR democratic socialism.”

Orwell, like many privileged white male authors, certainly had, as Solnit calls them, “blind spots.” Gender for one, she argues. Solnit complicates Orwell’s legacy as a Leftist writer by implicating him through his ancestors. “I don’t believe in ancestral guilt, but I do believe in inheritance, and Orwell came from people who benefited from the imperial enterprise and the domestic hierarchies and who sometimes held real power,” Solnit writes, here referencing his links to India, Burma, and Jamaica. Orwell was born in India. Later, after he enlisted, he served as a policeman in Burma, his time there chronicled in many of his famous essays including “A Hanging” and “Shooting an Elephant.” The essays present a reluctant soldier discovering the human spirit abroad.

And then there’s the fact that Orwell’s family money came from the sugar industry. Due to this, Solnit believes Jamaica Kincaid “was the great foil to Orwell’s background.” In her essay “Flowers of Evil,” Kincaid notes that “the naming of things is so crucial to possession.”  Kincaid’s essay outlines “the relationship between gardening and conquest”–describing the oppressive nature of the botanical garden as a project of colonialism to uproot and undo meaning. This ambiguous relationship to gardening that Kincaid has written about for so many years is what Solnit attempts to use as a “foil” to Orwell’s naively optimistic garden writing. It would be advisable to seek out Kincaid’s own essays on the topic.

Solnit and Orwell both ultimately believe that to stop and smell the flowers is a powerful act. “Is it wicked to take a pleasure in spring and other seasonal changes? To put it more precisely, is it politically reprehensible…” Orwell asks. He had a knack for critiquing Puritanical Socialists.

An important project of Solnit’s book is complicating pleasure. What is the cost of pleasure under capitalism? Orwell certainly romanticized farm labor. Solnit points out that only those who could afford to not work on farms longed for the idylls of fields. She dedicates chapters to exploring the cost of transporting flowers from Colombia into supermarkets for holidays like Valentine’s Day and Mother’s Day. In these chapters, the swiftness of union busting and dissonance of beauty stand out to Solnit.

Solnit has written previously about the myth of the hero and the importance of creating transformative communal work. A different dystopian novel, Grievers, by Adrienne Maree Brown, comes to mind. Grievers is an excellent science fiction novella that follows a woman as she unspools the history of her community while a pandemic rages around her. It is in line with Ursula K Le Guin’s “The Carrier Bag Theory of Fiction,” which Solnit returns to often in her work. Le Guin’s essay argues that stories about hunting were often overvalued for their lone hero narrative to the detriment of stories that meander and gather. She’s making a point about the collectivity of women who gathered, often lost in the shuffle of more singular narratives. Girls who shoplift are fulfilling the femine urge to be hunter-gatherers. They’re crafting and redistributing joy.

1984, in contrast, is about one man. Memory and totalitarianism go hand in hand—the destruction of the past, as Orwell points out, is important in eliminating hope. It also eliminates love. When Winston, the hero of 1984, frees himself from Newspeak it is through the love of a woman. In 1984, the orgasm is on track to being phased out by neurologists. Similarly, in Le Guin’s tale of time-bending dystopia The Lathe of Heaven, our hero discovers memory and truth through love. Love can beget a calming clarity because, as Le Guin notes, “Love doesn’t just sit there, like a stone, it has to be made, like bread; remade all the time, made new.”

As a high schooler, I remembered only the gray claustrophobia of Orwell’s masterpiece. It felt like an impenetrable wall. The Ministry of Love was a wall of words, a brick text I could not scale with ““high-ceilinged windowless cell with walls of glittering white porcelain.” It reminded me of Camazotz from A Wrinkle in Time as a child, a place of utter blank conformity. Solnit, however, shifts us to refocus our attention on Winston’s Golden Country. There is a sensuality to the scenes that occur “under the trees to the left of him the ground was misty with bluebells” or in “the mindless tenderness that he had felt under the hazel tree.”

There was an austere side to Orwell that Solnit does not dwell on. That is, the famous list of Soviet sympathizers he turned into the British government. He turned them over, as Timothy Garton Ash notes in his NYRB article “Orwell’s List,” to a “beautiful woman” named Celia Kirwan. Ash attempts to rescue Orwell’s sullied name as a good Leftist: “Some writers today suggest the IRD’s anticommunist activities were Britain’s equivalent of the McCarthyite witch-hunt. If so, then one is struck by how mild it was by comparison with the American McCarthyism which prompted Arthur Miller to write The Crucible and Charlie Chaplin to flee back to Orwell’s Britain.” Yet, here, as elsewhere noted, Orwell’s conservatism continues. Paul Robseson is noted as “Very anti-white.” It would then seem laughable to claim, as Ash does, that despite the fact his list contains “eight variations of ‘Jewish?’” his “entire life was a struggle to overcome the prejudices of his class and generation.” Ash then notes that Orwell lost his struggle. But no great struggle or reckoning with his prejudices seems indicated by Orwell’s work, only the occasional admittance that Britain was an emperor with no clothes, as in “Shooting an Elephant.”

Fairy tales about love and hope often intertwine with stories of war and political oppression. Love is often the catalyst found in contemporary revolutionary novels. In 1984 as in Orwell’s work at large, pleasure and love are sweeping forces that struggle to make themselves legible in the drudgery of terror. Yet Solnit and Orwell both believe in roses. The hope that something will outlive them. Trees and rose bushes. The pleasure of reading Orwell or Solnit is in tracking through the labyrinth of pleasure and politics, of learning some arguments recur throughout history, even if few conclusions ever satisfy us. Is it wicked to stop and smell the flowers? Is it wicked to believe in love? For some, love is the ultimate betrayal in the face of obliterating monotony. 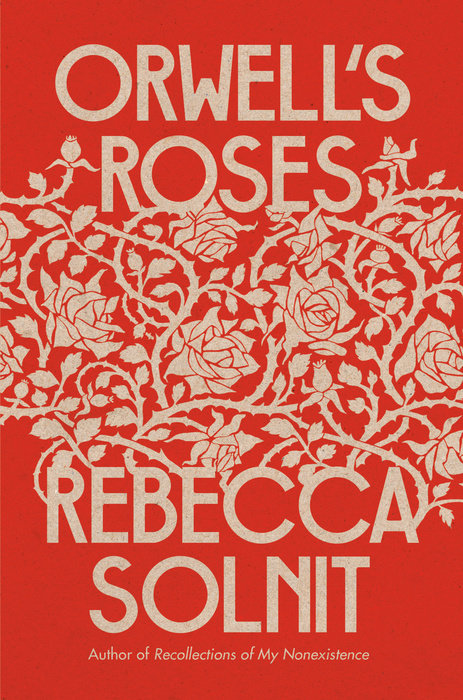