Patty McCormack has come a far piece in the past 67 years, so it was with some dismay that she suddenly realized recently she was still working 46th Street.

At age nine, in December of 1954, she opened at the 46th Street Theater in, and as, The Bad Seed, Maxwell Anderson’s shocker play version of a chilling novel by William March. For the next 333 performances she reigned supreme as Broadway’s holy terror: malicious, manipulative, ultimately murderous Rhoda Penmark, who would kill for a penmanship medal if she felt she deserved it more than her scribbling classmate, Claude Daigle.

Nowadays, at age 76, she’s back on 46th Street at Theater at Saint Clement’s, two blocks west of the 46th Street Theater (now known as the Richard Rodgers). McCormack is among those dear hearts and gentle people inhabiting Morning’s at Seven, which opens Nov. 15.

Set in a small Midwestern town of 1928, the play focuses on the turbulent togetherness of four aging sisters and three spouses, all of whom live “a stone’s throw” from each other. In fact, the action is spread across two adjacent front-porches. In a starry cast of senior citizens (Lindsay Crouse, Dan Lauria, Alma Cuervo, John Rubinstein, Alley Mills and Tony Roberts), Little Rhoda fits in just fine. Indeed, she rates a gold star in deportment, always the good sister rushing forth to make the peace and smooth the waters. She’s also adept at taming her snobby prof hubby.

The cast meshes beautifully, on- and off-stage. “First of all, we are older, and we appreciate every day,” McCormack explains of this in-synch phenomenon. “I think we appreciate the fact we’re coming out of COVID, and we’re still here. Life stopped, and now the theater is coming back. To be a part of this is just amazing.”

She’s a part of this because of castmate Dan Lauria, who recommended her to producer Julian Schlossberg. (Lauria also suggested Mills—who played his TV spouse on The Wonder Years for six seasons—when Judith Ivey was sidelined by an injury.)

At 15, McCormack became the youngest person honored with a star on the Hollywood Walk of Fame, but then everything came early to her. Brooklyn-born to a professional roller-skater and a fireman, she began modeling at four and believes she posed for the Coppertone ad of the little girl whose tan line is exposed by a dog yanking at her panties. By six, she was acting, and by nine she was juggling The Bad Seed on Broadway with a recurring role in the weekly TV series, Mama, which was broadcast from CBS Studio 41 above the waiting room in Grand Central. “It was a busy time,” she understates.

“We rehearsed the series at our rehearsal space at Grand Central Station, then gave the performance on Friday nights. Sometimes, they would write me in earlier in an episode, because it went on from 8 to 8:30. The curtain, in those days, went up at 8:40, and usually it was later, but you couldn’t always count on traffic getting you there. I remember a couple of times my understudy, already in costume, looking green-faced, hoping that I would get there.

“I don’t believe I missed a performance. In the old days, it was a thing of honor not to. You were trained like you were in boot-camp. If you weren’t feeling well, too bad. As time went on, I think they changed the rules somewhat so the understudies actually got a chance to go on.”

It’s surprising to discover McCormack has quietly amassed 158 screen credits, most of them in television, including a recurring role as Adrianna’s mother on The Sopranos. Her feature-film career, which The Bad Seed jump-started, led to All Mine to Give, Kathy O’ and The Adventures of Huckleberry Finn, and, less salubriously, The Explosive Generation, Maryjane and The Mini-Skirt Mob. In 2008 she popped up as Pat Nixon in Ron Howard’s film adaptation of Frost/Nixon.

From 1967 to 1973 she was married to restaurateur Robert Catania, a union that produced two children, and now she has two grandchildren to dote on. This family connection is what drew her to Morning’s at Seven.

“This play is so representative of me,” she admits. “It’s so much about family and different personalities in one family—the ups and downs, and who they are in the scheme of things. The underlying thread is connection and love. I respond to that. I don’t know why, but I always have.

“Even as a kid, my favorite movie was Giant. I loved that story. They were young together. They got married. You got to see the kids grow up. Then the grandkids. I just ate all of that up.”

And, too, Elizabeth Taylor was her favorite actress at the time. She got to see her up close at the rehearsal for the 29th annual Academy Awards show in 1957 and she remembers it like yesterday: “I was stunned to see her. She didn’t have on any makeup, and she still looked like a princess.” (Taylor, indirectly, was a big winner that year. Giant’s George Stevens won Best Director, and her husband, Mike Todd, won Best Picture, having produced Around the World in 80 Days.)

McCormack was there for a reason. She was a Best Supporting Actress nominee for The Bad Seed, the first time a child actor was allowed to sit at the adults’ table. (Before that, juvenile performers were given non-competitive honorary Oscars.) She lost to Dorothy Malone for Written on the Wind, but McCormack’s is the performance that stood the test of time and is still talked about today.

Alfred Hitchcock was asked to direct the film of The Bad Seed but passed. So did Billy Wilder, who wanted to go with the book’s ending and couldn’t because the Production Code dictated all crimes (even those of petulant, pigtailed girls) had to be paid for. In Anderson’s play, Rhoda’s mother discovers what her daughter has done and makes plans to poison Rhoda and kill herself but succeeds only in her own suicide. In John Lee Mahin’s screenplay, the mother survives, and Rhoda dies trying to get that damn penmanship medal. In March’s novel, the mother dies, and Rhoda lives—to plot killing an old-biddy neighbor for her love bird.

Mervyn LeRoy wound up directing the film and was no help tamping down Nancy Kelly’s stage acting as she transferred the role of mother to the screen. “You know it was a play,” comedian Mario Cantone recently observed, “because Nancy Kelly’s performance reaches the back of Radio City Music Hall.” Kelly had won a Tony with that performance and was determined to get an Oscar for it as well—too determined. It didn’t happen. She got a nomination, but she never starred in another movie.

Three years ago, for a TV-movie remake, McCormack got a chance to come out on the other side of The Bad Seed when she played a child psychiatrist (named Dr. March, for the story’s creator).

Films and TV permitting, she has kept up with her stage acting, performing primarily at Los Angeles’ Whitefire Theater. Her last stint there was six years ago, so her leap to New York for Morning’s at Seven amounts to an uncommon commitment.

In recent times, McCormack has had an eight-year relationship in L.A. with Ernest Thompson, who wrote the play and screenplay of On Golden Pond. She was even on location when Henry Fonda and Katharine Hepburn did their Oscar-winning work on Thompson’s Oscar-winning script.

Having done Morning’s at Seven in New York, why not do On Golden Pond, now that Little Rhoda is grown up? She likes the idea. “Don’t laugh,” she cautions. “It would be perfect for me. They did a lot of productions in L.A. So many people I know played it. It never occurred to me, but there’s something about New York that’s just—you know, it’s New York.” 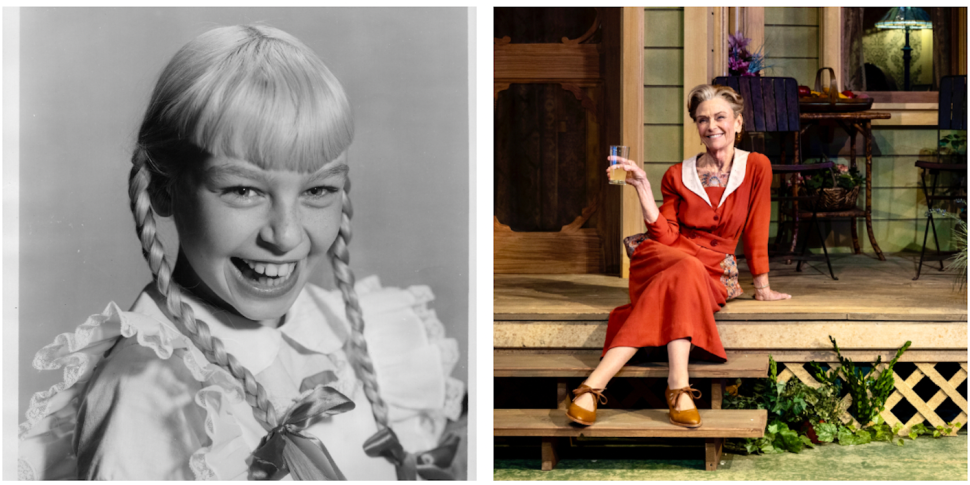