Spencer, about Princess Diana’s decision to leave Prince Charles in the winter of 1991, refers to itself as “a fable from a true tragedy” in its opening text. It’s more ghost story than biopic; more luxuriant imagining than approximation of real events. It’s also a good film—a very good one, in fact—that frequently threatens to be great, but it seldom lives up to the weighty themes promised by its dialogue, and it comes achingly close to scaling the heights Kristen Stewart reaches with her performance.

For most of its 2-hour runtime, the film’s visual fabric remains faded despite the spectrum of bright colors in its design—primarily, in the roster of lively outfits hand-picked for Diana, while keeping in mind her public appearances during the Queen’s Christmas trip to Sandringham House. The winter estate is located mere steps from Diana’s childhood home, where she lived when her surname was still Spencer, but the house she grew up in now lies empty, left to rot behind a barbed wire fence. The version of herself who roamed its grounds freely remains just out of reach. A decade into her marriage, she has little say in what she wears, when she eats, and even where she’s allowed to walk, and the way Stewart internalizes her suffocation makes her feel just as frayed as the film’s palette, which takes on the appearance of an old, neglected photograph in dire need of loving restoration.

Much of the premise centers on the Royals’ concern over Diana’s media perception. This, on its surface, brings to mind another film by director Pablo Larraín, Jackie from 2016, which was set during the aftermath of John F. Kennedy’s assassination, and told of his wife Jackie Kennedy’s struggle to memorialize and grieve in the public eye. However, the film that Spencer most resembles is actually Stanley Kubrick’s The Shining, an unsettling horror movie in which the past un-buries itself in numerous ways. Larraín makes frequent visual references to The Shining, between snaking steadicam shots that follow Diana through labyrinthine hallways, a bathroom scene that all but re-creates a famous moment, and an army major with slicked-back hair (Timothy Spall) hired to keep an eye on Diana. He watches her from the shadows with unblinking eyes, and stands so eerily still that he recalls images of the Overlook’s ghostly bartender, Lloyd, or its long-dead caretaker, Delbert Grady.

These temporal evocations aren’t limited to the film’s aesthetics; the dialogue features references to the way Royal traditions flatten time in a manner that combines the past and present, and eliminates the very idea of shaping one’s own future. As for how the film embodies this idea, it has a remarkably intriguing (though frustratingly infrequent) thread about Anne Boleyn, who was beheaded by King Henry VIII, and whose ghost appears before Diana when her mind begins to crack from the pressures of Royal life. The more Diana reads about Boleyn, and the more people whisper and speculate about her private life, the more the parallels between them begin to emerge. The Royals dining under an enormous portrait of Henry VIII even begins to connect the Crown’s then-contemporary power to the version that existed centuries ago, as if little has changed in the interim. (In the process, the silent specter which the film most evokes—both through Diana’s unraveling, and through the presence of a young Prince Harry—is that of Duchess Meghan Markle, who would go on to face similar struggles decades later).

The Royals themselves are presented uncannily at first, with their faces rarely visible or discernible in group shots, as if to flatten them into an imposing concept. One key difference between Spencer and The Shining is the way Larraín captures the setting’s exteriors. The Overlook’s mountainous backdrop gave it the appearance of an imposing beast, while the shadows it cast imbued it with a crushing weight. However, given the dull, cloud-less, shadow-less atmosphere captured by Larraín and cinematographer Claire Mathon, the film’s version of Sandringham—filmed at Nordkirchen Castle in Germany—appears to exist in two dimensions, as if it were a production façade erected for mere appearances the day before.

Nordkirchen also has the advantage of a gardened roundabout, allowing Larraín and Mathon to film the regimented arrival of the Royals’ vehicles from above, as if they were hands on a clock, or cogs in a machine. Even their food is delivered and prepared under military supervision. However, on occasion, members of the Royal family and their administrative staff emerge from this mechanical mass via closeups that humanize them, and surprising exchanges that make them seem as if they, too, exist under the thumb of some larger, unseen institution. Scarier than any individual is the idea that Jack Farthing’s sniveling Prince Charles or Stella Gonet frigid Queen Elizabeth could be at the mercy of an invisible hand that transcends them, and transcends history.

At the center of this terrifying concept is Diana herself, a woman who tries desperately to latch on to the few allies she has on the Royal staff—her Royal Dresser, Maggie (Sally Hawkins) and the Head Chef, Darren (Sean Harris)—but who remains at the mercy of Royal hierarchy, and is frequently isolated (and thus, dehumanized) by a seemingly omniscient force able to target her each and every weakness. However, while Diana’s interpersonal dynamics are intriguing, if only for the way they radiate the promise of fleeting warmth, they’re off-set by a narrative that constantly promises abstraction, and even dips its toe into it from time to time, before settling back comfortably into the literal.

Screenwriter Steven Knight tasks Diana with espousing lavish ideas about time and a whole host of poetic metaphors about her place in the Palace. The film, however, is rarely able to dramatize her words or incorporate them into its fabric; when it does, the result is little more than a haphazard shot of some animal or object to which Diana compares herself, before the story charges on. However, while the dialogue introduces too many ideas for the film to balance, and conjures too many images for it to satisfyingly portray, Stewart is tasked with the opposite: her job is to embody the singular idea of wrestling her way out of invisible constraints (or visible ones, like an imposing pearl necklace, which becomes the focus of a viscerally unsettling vision). While Spencer eventually succumbs to the lethargy of this single note, Stewart finds new ways to make it echo.

The film’s aesthetics are able to complement Stewart’s devastating work, at least at first. The camera seems to embody both the Crown and the paparazzi, poking and prodding at her in close up as she tries to escape its gaze. But when Diana finds rare moments of freedom in private, and Stewart dances in empty hallways—sequences during which the film ought to be at its most imaginative—the camera’s approach feels noncommittal. It’s neither close enough in its framing (nor rhythmic enough in its motion) to capture her euphoria, nor is it far enough (or still enough) to paint these sequences with melancholic or ironic brush strokes. Stewart’s body language feels as if it has something vital to say, but the film is unwilling to translate it.

However, regardless of these handful of aesthetic missteps, the centerpiece that is Stewart’s performance shines from start to finish, and even works in tandem with the music. Diana’s discomfort is equaled by Johnny Greenwood’s off-kilter percussions, which envelope the soundscape when she’s at her most troubled. The score’s jazzier, more fluid compositions clash wildly and intentionally with the film’s pomp and circumstance, and Stewart similarly bristles against regal expectations with occasional vulgarity in her words and actions. The carefree manner in which she scarfs down food in private verges on liberating (though the film doesn’t quite follow through on this instinct, and often shies away from moments that threaten to be bawdy or intoxicating—even when they might enhance the narrative’s core tension between indulgence and control).

Stewart is by no means doing an impression of Diana. While the character’s accent is posh and English, her voice bears Stewart’s distinctive rasp. She modulates it to sound even rougher when she swears in private, but works to conceal it behind a put-on softness during Diana’s public appearances. This dynamic, between the private and public Diana (or Diana as she appears alone, versus when she can feel the Crown’s watchful eyes) is a tightrope Stewart walks with stunning precision, between Diana’s real and messy vulnerability, and her rigid public performance of more a calculated vulnerability, a put-on “feminine” modesty that allures the eye—but not too much, lest people gossip!—and spackles over any hint of authentic emotional or physical response with a layer of concrete.

The way she leans and tilts her head is both distinctly Diana—the real Diana, and her poise in the public eye—and distinctly Kristen Stewart, a physical hallmark of her timid, subdued performance style that lets buried emotions boil slowly to the surface. Stewart is perfect for the part, not because of any resemblance she shares with Diana, but because she so effortlessly embodies someone placed under a microscope, given the way she herself has been torn apart by tabloids for over a decade.

Except for her accent and hair style, Stewart practically plays herself, creating a living document not only of recent British history, but of contemporary stardom, and the intimate emotional fallout of a gaze that most people only know from a distance. The film itself only captures that gaze on occasion, and only embodies Diana’s exuberant emancipation in short-lived bursts, despite the narrative’s attempts to make it feel like something real and lasting. However, the defiant performance at its center is powerful and detailed enough to feel like a memory, as if this fictional Diana had once graced our screens, and she now returns to tell us her side of the story—or some dreamlike version of it. 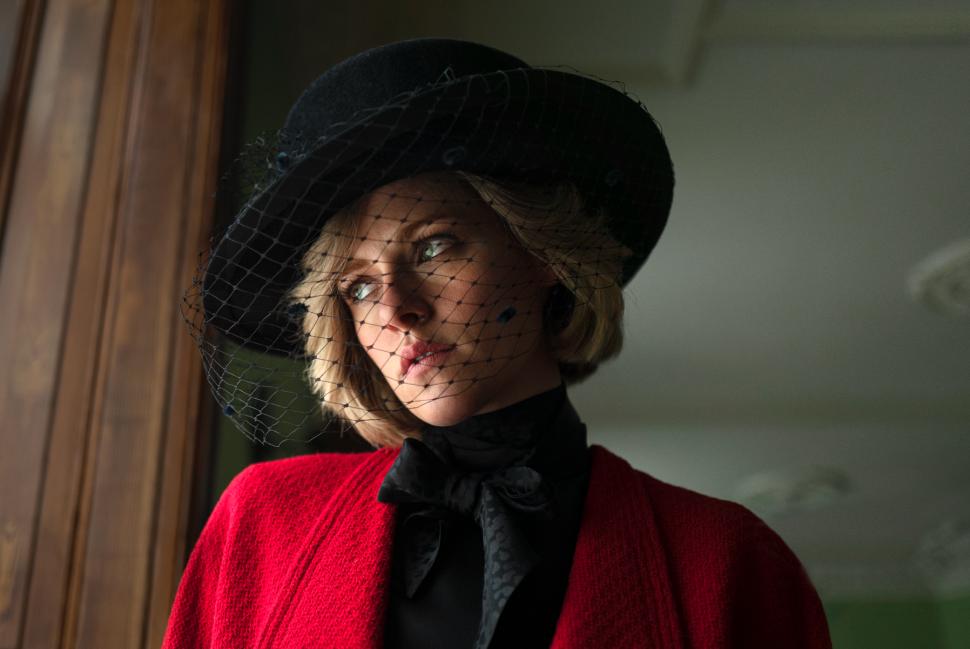