In the hours after news of his death spread on a cold Friday night, all the words exploded. On every platform, in every form, people unleashed a torrent of grief and love and awe at the passing of American theater’s greatest composer-lyricist. Timelines flooded with firsthand encounters, testimonies of lifelong fandom, raw bereavement at losing what felt like a dear friend, tributes to the cast album or show that got you hooked. And the quotes—of course—lyrics to scores of songs from “A Bowler Hat” to “Your Fault/Last Midnight” in some 19 musicals that he made immortal across nearly six decades (a dozen of which he wrote both music and lyrics). Which line would perfectly serve the moment? None and all of them.

Whether you were hammered at Marie’s Crisis chirping along to “You Could Drive a Person Crazy,” or curled up alone at home, you were probably (like me) clamped to social media, pouring out your soul and reading and sharing strangers’ thoughts. It was a way to feel less lonely, praising and adoring this man who wrote magnificent songs about isolation, messy feelings, and lack of connection. Those spending Thanksgiving weekend with family in some godforsaken place that isn’t New York City had to explain their sudden tears to mystified aunts and nephews: Don’t you understand?! Stephen Sondheim is dead.

More importantly, he lived and worked. Sondheim was 91 and had already for decades been acknowledged as a genius, a peerless innovator in his field, the missing link between Broadway’s Golden Age and the future of musicals. Right now, he’s represented on Broadway by a gender-flipped Company (1970) and Off Broadway by his survey of Presidential killers or would-be killers, Assassins (1990). Think of that two-decade span. He wrote shows before and after those years, but they bookend a stretch of work that, in terms of dramatic variety and musical sweep, is completely unmatched in Broadway history: Follies, A Little Night Music, Pacific Overtures, Sweeney Todd, Merrily We Roll Along, Sunday in the Park with George, and Into the Woods.

Each of those shows represents a huge leap forward in content and execution, the fruits of a restless, relentless imagination that sought out new forms, new stories and characters, fresh challenges to integrate song and scene. He followed up Company, a nonlinear, bittersweet portrait of urban dating and marriage with Follies (1971), a virtuosic pastiche of 20th-century song craft during a traumatic reunion of ex-showgirls. Next he adapted an Ingmar Bergman romantic comedy, producing one of his most elegant scores on the theme of love, fidelity, and growing older (A Little Night Music). In 1976, the American bicentennial year, Pacific Overtures recounted the American “opening” of Japan in 1856, a shocking tale of colonialism and cultural assimilation. Then in 1979, he unveiled one of his most musically complex and morally bleak masterpieces, Sweeney Todd: The Demon Barber of Fleet Street. Who else could make a hilariously dark musical about a serial killer whose accomplice bakes victims into meat pies?

Merrily We Roll Along (1981) is an undisputed low point, commercially, closing after terrible reviews and 16 performances. Today, the buoyant, nostalgic score will make many a fan’s Top 5. Rising from the setback, Sondheim found a new collaborator and produced two of his best-loved shows: Sunday in the Park with George (1984) and Into the Woods (1987). The former imagines the creation of an iconic pointillist painting, the latter is a witty and heartbreaking riff on fairy tales for adults. A new generation of kids fell in love with Sondheim’s dizzying rhymes and his poignant, deeply personal music. At age 60, he unveiled one of his darkest and most controversial works: Assassins, a bitterly ironic yet somehow hopeful look at the underside of the American Dream.

As a consummate man of the theater, Sondheim knew that his art did not exist outside collaboration. He always stressed the essential contributions of book writers. He was generous with praise for varied and talented playwrights such as George Furth, Hugh Wheeler, John Weidman, and James Lapine. Equally important are the orchestrators and arrangers, the musical wizards who worked with Sondheim to turn his piano-vocal scores into the vibrant orchestral tapestries we revere today: the great Jonathan Tunick and Michael Starobin, to name two. His uniquely spiky yet lustrous sound depended greatly on his longtime musical director, Paul Gemignani. Sondheim’s long association with the titanic producer-director Harold Prince led to his artistic successes in the 1970s. Then, in the 1980s and ’90s Lapine helped steer Sunday, Woods and one of his last Broadway musicals, Passion (1994) to vibrant life.

I interviewed him once in 2012, for background on an essay I wrote for the Sondheim Review. My angle was a bit perverse: anthemic Sondheim. Yes, I know: Andrew Lloyd Webber and rock bands write dopey anthems, not the genius behind the multi-perspectival “Someone in a Tree.” In “An Angry Joy,” a well-intentioned but perhaps contrived article, I analyzed Sondheim’s anti-anthems, or his anthemic-ish songs. We spoke on the phone for about 20 minutes, which was thrilling and terrifying as you might expect. He thought I might be barking up the wrong tree—or had mistaken a shrub for a tree—but was nevertheless generous with his time and insights. We talked about how anthems are constructed, how they’re used in sporting or political events, how they bond groups, how all drama is about connection, and so forth. The man did his best to get me to define my terms and narrow my focus, which I tried to do. I had wanted to write this piece for years, ever since Assassins turned me into a Sondheim admirer in college. Point is, he was critical and exacting, because he knew that details mattered. And he was an instinctive teacher, happy to drop wisdom on a younger artist or, in my case, a confused journalist. As a teenager he had the amazing good luck to be mentored by the master book writer and lyricist Oscar Hammerstein II, and he spent his life paying it forward. As Dot tells George at the end of Sunday in the Park with George: “Anything you do / Let it come from you / Then it will be new.”

Who was Sondheim, really? To evoke him I would have to use my imagination, extrapolate from his songs and what I’ve read about him. I think he understood aloneness. I think he understood what it is to observe people from a distance, to infer emotion, to speculate on trust and intimacy. In some ways he was an existential orphan, survivor of a toxic mother. His working relationships were essential and extensive. He plugged into the world lying on his couch with a legal pad and pencil. He wasn’t lonely because he populated his world with music, words, and characters. He worked with uniquely talented collaborators and they pushed each other to excellence. He knew what it is to cut open your chest, show your heart, and be rejected. And, eventually, lionized. He knew how to lose the self somewhere in a forest of words and emerge scarred but wiser. He loved form, order, color, meaning, logic, genre, tradition, and rigor because daily life can be so lacking in them. He was a world builder of the first order, and his worlds are filled with so much gorgeous music and unforgettable lines, we want to live in them every chance we get.

All you have to do is give up the other, real world. I saw him cry once during a public interview with Tony Kushner, who recited a favorite poem of Sondheim’s, Phyllis McGinley’s “Love Note to a Playwright.” The verse muses admiringly on Richard Brinsley Sheridan’s habit of never opening or responding to mail, instead using his time to write plays. Or in Sondheim’s case, finishing a hat. Clearly the pathos of sacrificing for your art hit him hard.

What did—does—Sondheim mean to the American theater? From his earliest work as a jobbing lyricist (still not 30 years old!) on the modern classics West Side Story and Gypsy to his masterpieces and his later, still challenging musicals, he took this odd hybrid form, a post-operetta mishmash of dance, drama, tunes, and spectacle, and showed how it can be a delivery system for complicated emotions and ideas. Marital ennui, international politics, homicidal revenge, obsessive love, the death of innocence, terrorism, madness, and above all, the healing power of stories, these were just some of the subjects he made sing.

Sondheim also inspired generations of artists to trust themselves—but do the work. He was a fiendishly talented individual who gave his life to his art, but dissuaded people from using that art to interpret his life. He was a playwright in songs, not autobiography. He wasn’t, he insisted, Sweeney or Bobby or Dot or Kayama or Czolgosz or Fosca. At a time when the borders between art and identity are so porous as to barely exist, Sondheim insisted on the importance of privacy, on the absolute right of an artist to create what they view as the truth, to succeed or fail based on their own standards, not ones imposed by critics—internal or external. In his revelatory two-volume collection of annotated lyrics, Finishing the Hat and Look, I Made a Hat, he laid out his three principles necessary for a lyric writer (bear in mind he said he enjoyed writing music more than lyrics): Content Dictates Form, Less Is More, and God Is in the Details, all in the service of Clarity. You can spend a lifetime learning those principles.

He will continue to shape the future of musical theater because he trained our ears, set the bar high, and new composers and lyricists will study his work. For a hundred who try, misguidedly, to imitate him, one will find their voice. In Lin-Manuel Miranda’s recent movie, Tick, Tick… Boom!, the man himself makes an audio cameo, re-creating an actual voicemail message he left on Jonathan Larson’s answering machine. Sondheim can be heard telling the future creator of Rent: “I didn’t get a chance to speak with you after the reading, but I wanted to say, it was really good. Congratulations. I’d love to get together and talk to you about it if you have any interest—no pressure. The main thing, though, is that it’s first-rate work, and has a future. And so do you. I’ll call you later with some thoughts if that’s okay. Meanwhile: Be proud.” You make us proud, Mr. Sondheim, and more in love with the theater that you made so alive. 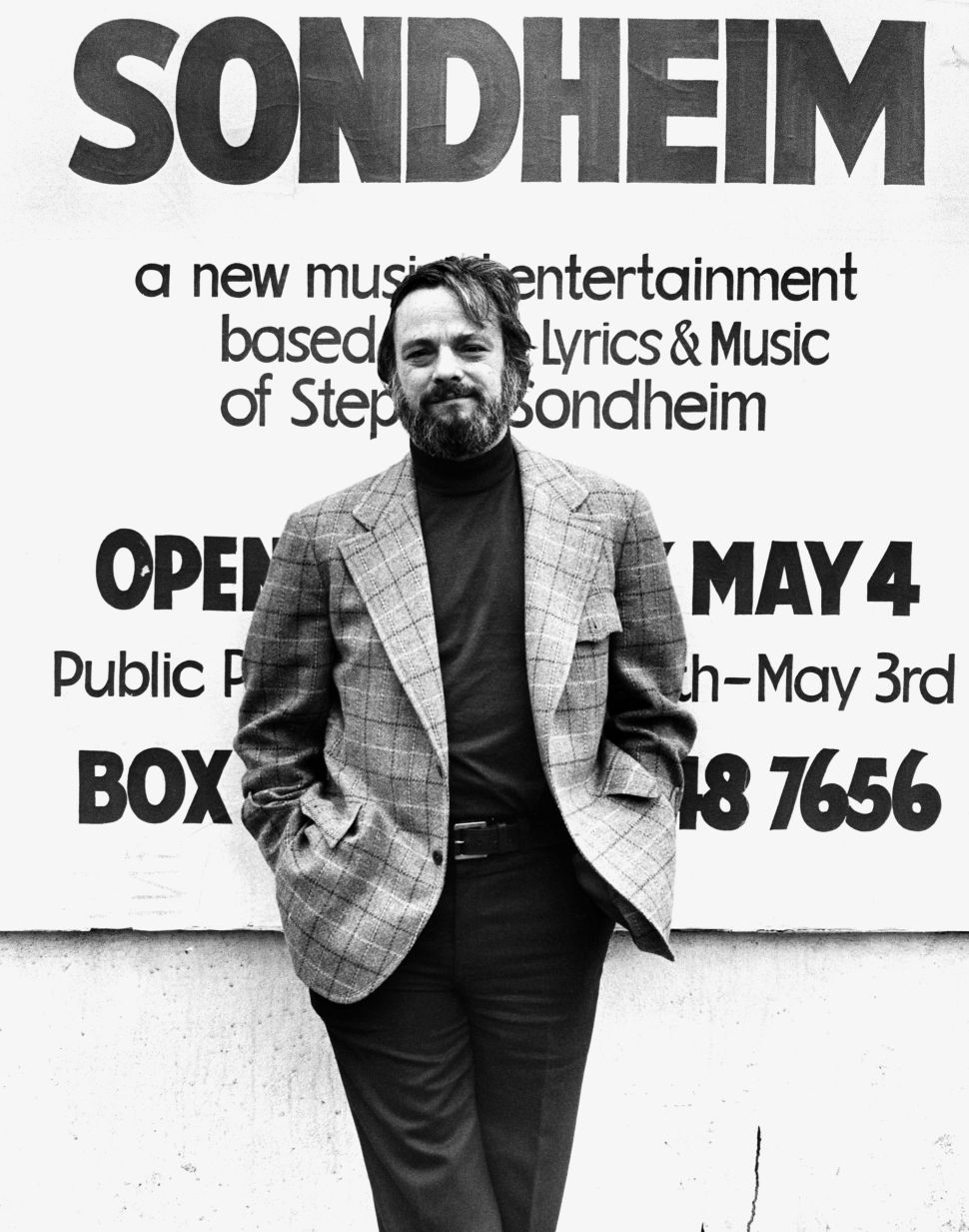