The only mistake in Peter Jackson’s Get Back is the first ten of its 468 minutes: a summary of the Beatles career rendered as a bang-bang-bang montage. That’s what Google is for, if you want it. After that, Get Back (released in three installments on Disney+) is sweet Yukon gold, a gentle wildlife documentary about waiting for songs and working with friends.

This footage exists at all because the Beatles enjoyed playing “Hey Jude” for a live audience in 1968, which led to them planning a live TV special, something to bring them back from the atomization of the White Album, where multitracking took the place of group give-and-take. As Harrison puts it, “just us doing it, and there’s no overdubs, so you can’t get out of it, it’s much better really.” Apple Films, a division of the Beatles’ company, had rented out Twickenham Studios for January 1969 to prepare for a movie starring Ringo Starr, The Magic Christian. On January 2nd, the Beatles took over Twickenham to rehearse and tape their special before the cinema folks came back at the end of the month. Director Michael Lindsay-Hogg was hired to capture the rehearsals. All the band had to do was write fourteen songs in two weeks, do their first live show in ages, and return to each other as friends and musicians. The official story is that they barely managed, as they stumbled toward an end that seems as inevitable now as it did unthinkable then. Get Back suggests they did exactly what they set out to do, efficiently, and mostly in good cheer.

Jackson went through sixty hours of 16 mm film shot by Lindsay-Hogg and his phenomenal cinematographer, Anthony B. Richmond, as well as over 150 hours of audio. Most of this material was new to the participants, including McCartney and Starr, who produced the final product along with Yoko Ono and Olivia Harrison. Each episode is almost three hours long, so Get Back feels more like three films than one series. Jackson sticks to the audio of what was said and sacrifices pictures for the truth. All of the spooky, smoothed out close-ups? That’s something to hold the eye while we listen to a conversation. This is the opposite of reality TV, a long slow film about songwriting without any ginned up conflicts.

I don’t see beef. I see a family. They got weary, them Beatles they did get weary, wearing that same old shaggy hair, but they didn’t abandon each other. The band ended because the project was over and they were about to hit the runoff groove. The point here is that it didn’t—they killed it until the last minute. If you know these sessions by the album and film assembled in the aftermath—Let it Be—then this plays as revelation. People projected their sadness onto the Beatles, who became easier to let go of if they were guilty of something. As Lindsay Hogg tells them unhelpfully in the first episode, “it would be so sad if you broke up.” The Beatles spend much of this series parenting the people around them.

The band is best, Paul says in the third episode, when they have their “backs against the wall,” which is where the time crunch leaves them. They track songs first at Twickenham, then in the Apple basement studio, during the live show, and then after the live show. They never stop working or quoting each other— “backs against the wall” is Paul repeating what John responds when asked, “Haven’t you written anything else?”

“I don’t think this is a very acoustically good place,” Harrison says an hour after walking into Twickenham. John asks “Who’s that little old man?” and Paul responds, “He’s clean, though,” a paraphrase of their dialogue in A Hard Day’s Night. (The man is a friend of Harrison’s sitting against the wall, one of many unnerving witnesses they’re being asked to ignore.) Harrison ends up walking off the Twickenham set at the end of the first episode, less angry than frustrated. He’s used to being a certain way with John and Paul, who have committed the crime of changing over time. John is saying less and Paul is over-explaining everything and trying to control the band when all they need to do is play.

Harrison’s enforced pause ends up saving the project, as the band decides to ditch the live TV special to lure him back. The Beatles move their gear into the basement of Apple, and they’re all happier for it. The band hadn’t worked together in months and within ten days, they’d sorted out their working rhythm. Mild, as band tension goes. Just happened to do it in front of too many people.

We see the Beatles write all of “Get Back,” starting with Paul’s first improvised scrap at Twickenham. Later, in the basement of Apple, John tries to help George finish the verse of “Something.” Lennon patiently watches Harrison play an early draft of the song, visibly respecting his friend’s work. The dissent in their “final days” was juiced up by the press, who created the acrimony they couldn’t find. In the second episode, Paul reads out the entirety of a gossip column about the Beatles and their infighting. He reads this to—as they play—the Beatles, who are very much not fighting. If the legend for decades had been the inverse, that the Beatles were perversely peaceful and never had a fight, this film would support that idea. This would also be reductive, but closer to the truth than the “bitter decline” narrative.

Get Back presents a review of the band’s catalog, inter alia, as they play songs they covered in their early days, like “Kansas City” and “Blue Suede Shoes,” and Quarrymen numbers like “Fancy My Chances With You” which were never recorded. You might get mixed up watching the band work on “numbers” (as they call them) from Let It Be, Abbey Road, All Things Must Pass, McCartney, and Imagine. Abbey Road was, even more confusingly, released before Let It Be. If you fall in love with the versions in this movie, the Super Deluxe 50th Anniversary five disc version of Let It Be has most of them. That album, most confusingly of all, is not called Get Back. Good luck!

These songwriters are not precious. In the third episode, Paul runs through “The Long and Winding Road” on piano. After playing a few verses, he bails. “I can’t sort of think how to do this one at all—my mind’s a blank,” he says, leaning back and looking up. And he’s right, because “The Long and Winding Road” isn’t a Beatles song—it’s a Wings song, a Billy Joel song, pure longing with no edge. It makes sense that it doesn’t make sense in the room, and Paul is the first to spot it.

Lennon was a comic responder of the first order. “I’d like to do an album of songs,” Harrison says. “On your own,” Lennon clarifies. Later, he sings out their list of complete songs— “Let It Be! Don’t Let Me Down! I Dig A Pony!”—which itself feels like a complete song. We learn that Mal Evans was the actual fifth Beatles, writing down all their lyrics as they went and handling the physical aspects of their spiritual practice. “Mal! They’ve nailed me down in the wrong place,” Ringo exclaims when they finally make it onto the roof of Apple for the concert you know is coming.

The sixth Beatle is Billy Preston, who walks the band back into child’s pose. Once in the basement of Apple, Preston joins the band for almost every session, including the roof concert (where he is obscured by the door, but very much there). Think about the Fender Rhodes in “Get Back”—that’s him. Lennon runs through an early draft of “I Want You” and turns it into a duet with Billy Preston with a different hook: “I had a dream, I had a very good dream.” Please, Peter Jackson, release all sixty hours and give us that wonderful Christmastime. 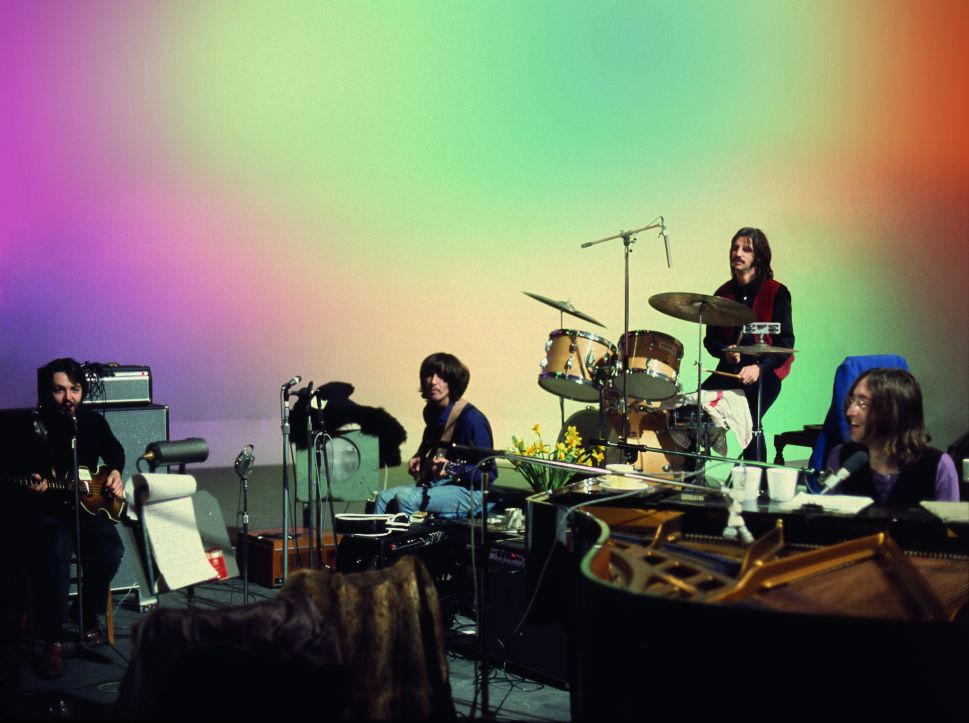