The Mother, Bertolt Brecht’s 1932 play based on Maxim Gorky’s novel of the same name, does not carry the cultural or historical baggage of his later, better-known Mother Courage and Her Children. Prefiguring that landmark text’s fully-developed narrative as a means of social disruption, it fits a similar view of fraught maternal care as emblematic of societal strife into the mold of his experimental lehrstücke (“learning plays”). In it, the widow Pelagea Vlasov finds herself taking on an increasingly larger role in her son’s Marxist activism through a series of eleven scenes and a handful of free-versed songs.

It is thus a fitting work for The Wooster Group, which had somewhat shockingly never tackled Brecht, to stage a tale of an accidental activist as their post-pandemic return—a time when many are figuring out ways to translate the online virtue signalling they championed in isolation into actionable, material change. It is surprising, then, how little is brought out into contemporary relevance in their new production, long delayed due to the shutdown of live theater in New York. Neither a straightforward retelling nor a radical reimagining, it upholds Brecht’s case for conscientious involvement in one’s own liberation while declining to hold them to new light, for closer inspection.

Not that each staging of a preexisting work—even a Wooster production—demands a ground-up rethinking, but the play’s plot is too ripe to remain as untouched as it does here: the wealthy, comfortable Fyodor the Teacher (Jim Fletcher) steps in and out of character to tell us the story of Pelagea (Kate Valk), whose son Pavel (Gareth Hobbs) has become further involved in Communist protests and activity. Along with comrades Semjon (Ari Fliakos) and Masha (Erin Mullin), they meet at his mother’s humble apartment to organize and print out literature. Pelagea, though illiterate and thus unable to comprehend the academic weight of her son’s political leanings, innately grasps onto a desire to protect him, and volunteers to pass out leaflets at the factory at which she works. Her involvement in, and understanding of, the movement grows to the point where she becomes somewhat of a leader, which brings about the kind of ironic and overwhelming results for which Brecht is known.

The titular role was originally played by the playwright’s second wife and frequent collaborator, Helene Weigel, who left her own indelible imprint on the Brecht’s oeuvre (and theater history) with her Mother Courage’s “silent scream” in that namesake work’s German premiere. Here, the role is suitably taken up by the Wooster Group’s own first lady, founding member Valk. Speaking in an authoritative, almost staccato cadence that asserts elder wisdom at the same time it conveys motherly trepidation, it’s an effective performance—one that, by laying bare Brecht’s already naked words, reveals the emotion behind them. Directed by Elizabeth LeCompte, Valk’s eyes stunningly convey a matter-of-factness that escapes the play’s built-in didacticism and vibrantly telegraphs her primeval instincts for survival and protection. From her first moments, one is sold on Pelagea’s emotional stakes, materialized by Valk’s magnetic performance.

This imbuing of emotion into the playwright’s pragmatic approach to epic theater seems to be at least part of the Group’s project in this production. After a song in praise of Communism, Fyodor, out of character, turns to the audience and asks, “You know for somebody who says he doesn’t want emotions in the theater, there’s a lot of emotion in that song you know – ‘it’s the end of madness, it’s the end of crime,’ is that not sentimental?” It’s a valid point (and laugh line) that hints at a demystification of Brecht’s ostensible coldness—the result of his career-long project to force audiences to face facts—and this production does some interesting work in this regard. A screen hanging above the audience’s heads often plays scenes of 1930s crime films—like James Cagney in The Public Enemy—injecting a storytelling style contemporaneous to Brecht, and with similar street-level concerns, but with wholly melodramatic, mostly profit-driven motives. Semjon and Masha suitably speak in the clipped, Mid-Atlantic accent of that cinema’s mobsters and molls, which adds a sexy bit of intrigue to the printing operation they run from Pelagea’s home.

And yet, the comparisons mostly end there; the screen (designed by Irfan Brkovic) doesn’t always play these melodramas, and it hangs squarely in the center of the Performing Garage’s risers, so the back half of the audience can’t see what’s playing. Fyodor’s observation about emotions in Brecht doesn’t go any further, and the line is followed by a self-conscious re-insertion into the narrative.

At one point, the Mother asks plainly, “What can I, Pelagea Vlasov, 48 years old, widow of a worker and mother of a worker, do?” It’s a devastating line, and a fitting question for The Wooster Group to ask of themselves, and their role in the landscape. Throughout their nearly-50 year history, they have redefined downtown theatrical avant-gardism over and over—but a New York ‘downtown’ has been long dead and, after COVID-19, most of the world finds itself on the frontlines. Their production of The Mother is neither a fitting tribute to the novelty of their revolutionary style, which has now widowed them, nor a helpful encouragement for any innovation they may have helped raise.

Its respectful treatment of the material may be the fallout of a theater troupe meeting their spiritual maker; Wooster bowing down to Brecht, obediently hoping for validation but too shy to earn it. The role of a mother’s passivity has changed drastically since the work’s premiere, and the production might have done better to take from the Twitter and Facebook feeds of online mothers, up in arms about vaccines or school safety, who are anything but silent.

Its few additions mostly work. The songs, pure didacticism, as is common in most of Brecht’s works, are here refracted through Amir ElSaffar’s new compositions, which suggest a glitchy, off-kilter jazz somewhat in step with the times. Partly played on a keyboard by Hobbs—a rather genius move wherein the son, who catalyzes the play’s events, orchestrates them while withholding eye contact from his castmates—they are mostly effective. Joseph Silovsky’s staging, typical of The Wooster Group, is presented as almost a rehearsal reading: a smart way to convey that what matters most, at least in this production, is the original text. 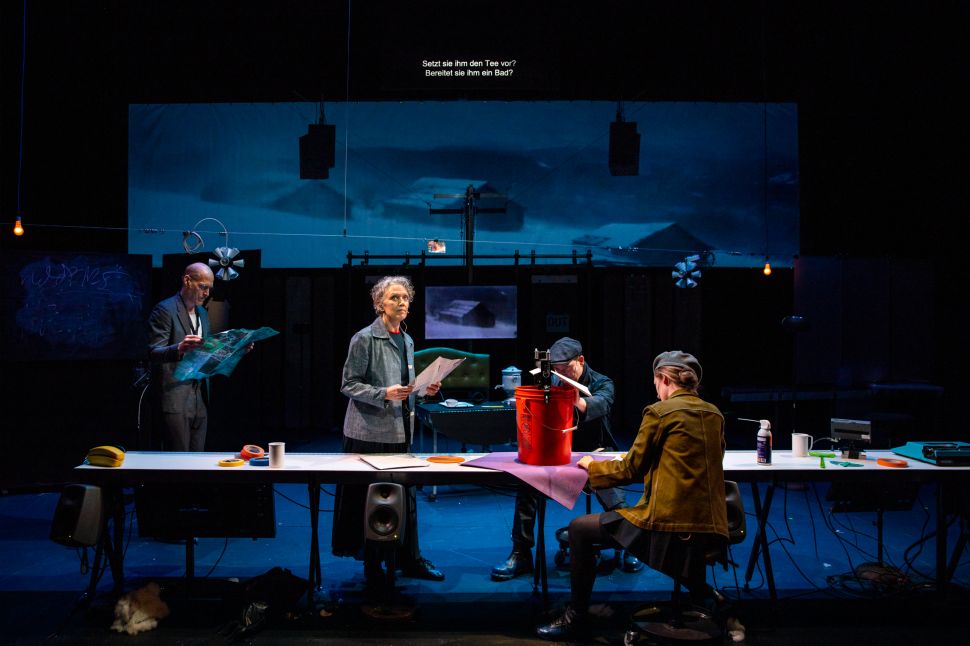