A Black actress lingers after rehearsal with an Irish-American stagehand. He’s a kindly old gent: hard of hearing, mind wanders. Today, the actress stood up for herself in rehearsal, calling out racist tropes in the script as well as the hypocrisy of her white director. She expects to be fired. Still, she vows, “We have to go further and do better.” The stagehand nods, ignorant of context: “That’s a good one. I’ll remember that.” But we forgot. It took director Charles Randolph-Wright years (and years) of persistence with Roundabout Theatre Company to recall that forceful demand. It was urgent in 1955, and it still rings from the stage of the American Airlines Theatre, where Alice Childress’s Trouble in Mind has finally gotten its Broadway debut.

In rehearsal rooms across the country there have been, no doubt, delicate dialogues about race and theater. Who programs the season? Who sits on the board? Who fills the seats? Early in Trouble, stage veteran Wiletta Mayer (the glorious LaChanze) breezily shares her cynical motto: “It’s the man’s play, the man’s money, and the man’s theater, so what you gonna do?” By the end, however, she asserts her moral authority in the room. Childress’s witty, insightful play—in which an interracial group of theater makers chafes against stereotypes in their anti-lynching melodrama—makes that awakening painful and real. I wonder if the discussions in the past two years have been as sharp and complex as those in this backstage satire.

Satire? That’s how the New York Times critic labeled it 66 years ago; perhaps today it’s a documentary. I think of satires as stories in which the author must betray all their characters in one way or another, but that’s not the case here. Childress does mine comedy from the flamboyant personalities who drift onto stage for the first day of rehearsal of Chaos in Belleville. In addition to Wiletta, there’s aspiring matinee idol John Nevins (Brandon Micheal Hall), vain and prickly Millie Davis (Jessica Frances Dukes), and Sheldon Forrester (Chuck Cooper), an older character actor who doesn’t seem to mind playing an endless series of doddering Black servants. When the pretty ingenue Judy Sears (Danielle Campbell) enters, the air palpably thickens. Although the girl has the least experience of anyone in the room, her lily-white complexion gives her an edge the rest can never exploit.

With the entrance of the restless, motor-mouthed white director, Al Manners (a coiled Michael Zegen), much-abused assistant Eddie (Alex Mickiewicz) in tow, the showbiz politics take over. Manners is brusque and jokey, ribbing Sheldon’s slowness, showering affection on Wiletta (“This is my girl!” he gushes), fluffing the play (“race situation…dynamic subject”) and floating his cockamamie version of the Method, actors “justifying” every emotion. Manners insists on raw, emotional honesty, which ironically will expose what a heap of ugly clichés Belleville is. In the fragments we glimpse over two acts, a young Black man who tries to vote is threatened with lynching; he can only be saved by a kindly white judge—but he gets lynched anyway. This creaky old tune is still playing on Broadway. What nettles Wiletta most is the fact that the other Black characters, including the victim’s mother, helplessly turn their back on him.

Randolph-Wright delivers a handsome, well-paced production with a dream cast (rounded out by Simon Jones as the stagehand and Don Stephenson as a squeamish white leading man). It’s one of the best-looking Roundabout productions I’ve seen in a long time, thanks to Arnulfo Maldonado’s cozily cluttered stage set, Emilio Sosa’s zippy period clothes, Cookie Jordan’s chic wigs, and Kathy A. Perkins’s strong but subtle lighting shifts (especially for a memory of a Southern lynching that Cooper delivers with devastating lucidity). The great Nona Hendryx provides smoky, insinuating original music.

Without question, Trouble is an old-fashioned play—if we understand the term to mean well-built, lean, and clear of purpose. You absolutely must see it if you care about Black work on Broadway, American theater, and the evolving state of our “canon.” Childress has been produced in regional theaters, and she’s taught in schools, but it’s time for New Yorkers to really get to know her work. This very moment, another company better be planning a revival of Wedding Band, her anguished story of an interracial marriage. Yes, the decades it took Trouble in Mind to make it to Broadway are troubling, but let this be a start. 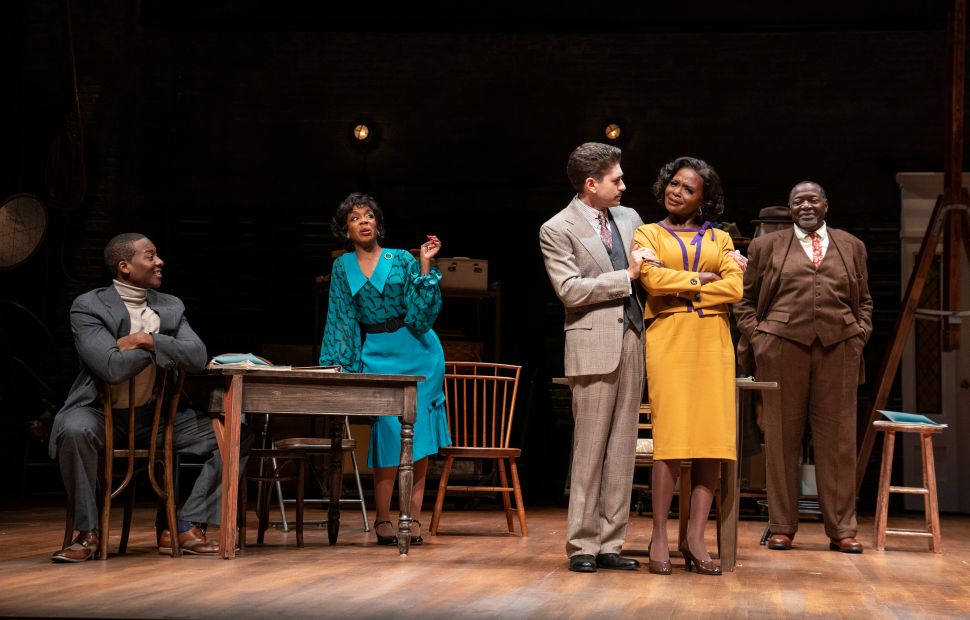