It’s a big week for streaming services; every platform on this week’s list boasts blockbuster series, massive movie premieres, or exciting new seasons. With big names like Lin-Manuel Miranda and Will Smith leading the streaming marquee and massive adaptations like Hawkeye and Cowboy Bebop gracing the small screen, it’s sure to be a content-filled week for all of us.

In this live-action adaptation of the beloved anime classic, a ragtag team of bounty hunters and cons gallivant around the galaxy, busting criminals and former foes along the way. Cowboy Bebop is an action-packed new series with oodles of spacey special effects, snarky back-and-forths, and an electrically charismatic cast helmed by John Cho, Mustafa Shakir, and Daniella Pineda. Cowboy Bebop premieres Friday, November 19th.

Lin-Manuel Miranda simply never stops working. This year alone he’s worked as producer, composer, and actor in films like In the Heights, Encanto, and Vivo—not to mention his feature directorial debut, Tick, Tick… Boom. This movie musical adapts the semi-autobiographical show of Jonathan Larson, a playwright best known for Rent. Starring Andrew Garfield, the film focuses on a theater composer facing an all too familiar quarter-life crisis: he’s nearing 30, but he has yet to write his one great show. It’s a movie by, for, and about creatives, striking a chord with anyone and everyone who faces anxiety over what they’re meant to leave behind. Tick, Tick… Boom premieres Friday, November 19th.

Huzzah! One of the most enjoyable shows on television is finally returning for Season 2. Created by Tony McNamara, one of the writers behind the Oscar-winning The Favourite, The Great is a royally riotous satire of Russian nobility in the era of Catherine the Great. The superb ensemble cast is led by the confident, cunning, and comical Elle Fanning alongside the obscene Nicholas Hoult, and the new season brings on television legend Gillian Anderson to spice things up as Catherine’s mother. With a coup and a pregnancy looming over the start of the season, the series is sure to remain a hoot and a half. The Great Season 2 premieres Friday, November 19th.

The Wheel of Time

Ahead of Amazon’s ambitions plans to adapt The Lord of the Rings into a blockbuster television series, the platform has another fantasy epic that’s sure to amaze bookworms and TV buffs alike. The Wheel of Time stars Rosamund Pike as Moiraine, a member of the Aes Sedai, a group of powerful, magical women. Adapted from a series of more than a dozen books, the show promises to be grandly ambitious take on the fantasy genre, a new kind of Game of Thrones-esque serial for the 2020s. The first three episodes of The Wheel of Time premiere November 19th.

One of the most hyped-up films of the coming awards season, King Richard is premiering this weekend. Will Smith stars as the titular king, Richard Williams, the father and coach of tennis prodigies Venus and Serena Williams. This true story puts its focus on a family and its unstoppable drive, moving above and beyond some tropes of your typical sports biopic. Smith’s turn as the prodigal father is one of the best of the year—and of his career. King Richard premieres in theaters and on HBO Max Friday, November 19th.

What to watch on Disney+:

This six-episode Marvel miniseries picks up where the Avengers saga left off with Jeremy Renner’s Hawkeye, adding new layers to the team’s resident archer. After Thanos’ Blip, Clint Barton returns to New York City to deal with a dark past that is rapidly catching up to him. Oh, and he has a sidekick-slash-protégé now, the highly capable and mildly overbearing Kate Bishop, played by Hailee Steinfeld. Florence Pugh is also expected to make an appearance as her character Yelena from Black Widow, continuing the film’s threat of revenge. Hawkeye Episodes 1 and 2 will action-packed new series on November 24th. 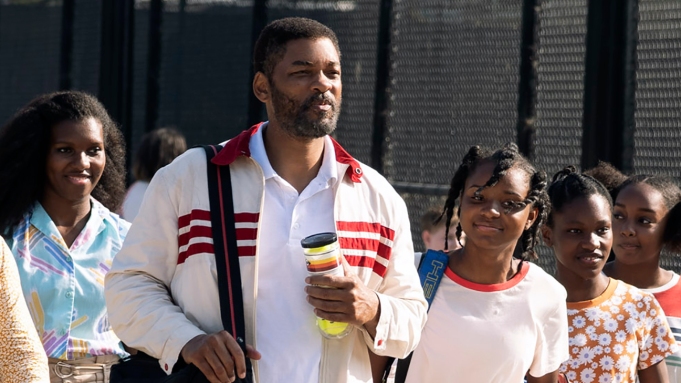