After he has thrown a screaming, red-faced, wall-banging tantrum in while you were partying, actor Brian Fiddyment appears to have shat his pants. His scene partner, Peter Mills Weiss, wrinkles his nose and asks dourly if Brian did indeed do a doody. Getting no answer, Weiss shoves a hand down the back of Fiddyment’s sweats and comes back with brown-streaked fingers. After an awkward pause, Fiddyment himself reaches back and produces a handful of taupe goo. My friends, theater is finally healing.

Sorry for the spoilers—I mean the play and that tofu curry you ordered for lunch. But it doesn’t really matter: partying is the sort of sickening comedy freak-out that has to be endured live to be believed. Co-created by Weiss and his partner, the witchy-waifish Julia Mounsey, the piece mingles autofiction, stand-up, clowning, and horror to explore how we make other people avatars of our own self-loathing. Executed with extreme precision and gonzo abandon in equal measure, it is abrasive, ugly, cruel, and morally reckless; I left Soho Rep with a spring in my step.

Back to the shit. As a theater professional, I’m 83% certain that a crafty bag has been sewn to Fiddyment’s pants which contains brownie batter. At the same time, this magnetic actor gives a performance of such vein-popping looniness, starting his manic business at 10 and ramping up from there, I have full confidence that he could crap on command. His bio identifies him as a comedian — he does limply deliver stale one-liners — but he’s actually a cutting-edge avant-clown, a grotesque zany who pushes his body to the limit for cringing laughs.

On the opposite end of the spectrum are the cool, inscrutable Weiss and Mounsey, who devised partying through improv and twisted autobiography. Mounsey enters first, sitting beside a cheap folding table in the poor-theater set designed by the group dots. (Harsh lighting by Kate McGee brings out the dust, dinge and bumpy textures of Soho Rep’s hallowed walls, repainted black for decades.) A microphone droops its head over the tabletop; Mounsey slides her smartphone under it. We hear an amplified voice memo about moving in with her parents during the pandemic. Mounsey sits as her voice plays, smiling wanly now and then. “I felt like, I was trapped in a house with all the different versions of myself that I had left behind, over the years,” goes one particularly vivid line. One day, Julia’s father urges her to visit a childhood friend, Brian, whom she has not seen in years. Brian tried to commit suicide recently.

Julia visits Brian in his parents’ basement, where he plays video games and drinks beer. He shows her modified videos of Super Mario 64 (“a video game, in which you play as Mario, who is a free-spirited Italian plumber, and you have to acquire stars,” she explains). Brian has edited various pop-culture icons in place of Mario: Darth Vader, Ariana Grande… and Julia. There’s an argument, thrown beer, but eventually an appeal: Brian begs Julia to write a comedy sketch about his suicide attempt. She agrees.

The second part of the play is an increasingly bizarre, unhinged reading of the sketch by Fiddyment and Weiss. The latter, deadpanning into the mic and exuding imperious boredom, plays Brian’s demonic, controlling mother. They role-play as corporate executives, drink whisky and hit the road with Brian’s atrocious comedy act, violently slapping the table for emphasis. Weiss mercilessly drills Fiddyment on his comic delivery until the boy explodes in a seething, hysterical fit that, on the night I attended, left a plastic bottle demolished and the actor’s left ring finger dripping blood. That was all before the fecal routine.

Press notes say the play was inspired by a meme of a spindly white boy fondling a katana blade with a caption that begins: “When you were partying I studied The Blade / When you were having premarital sex / I mastered THE BLOCKCHAIN / While you wasted your days at the gym in pursuit of vanity I cultivated Inner Strength.” Depending on your tolerance for incel braggadocio, the sentiment is laughable or chilling. Mounsey and Weiss play it for both; you can leave partying feeling delighted and depressed. In the final section, Julia (well, Brian-channeling-computer-generated-Julia-on-video) talks about how she has so much muscle tension in her pelvis, she can’t have intercourse, and implies she has a history of self-harm. As with every detail, you don’t know if it’s radical exposure or manipulative b.s.

When you were partying is not a tidy play, an easily interpreted play, or really a play at all. Reminiscent (though smaller scale) of early work by Wallace Shawn (A Thought in Three Parts) and the Wooster Group (Sakonnet Point), the whole is blessedly broken. Mounsey and Weiss clearly relish the legacy of avant-garde theater: the microphone, table staging, and video monitor have been experimental tropes for decades. (To be honest, I came up in the 1990s theater scene, and this felt like a stylish throwback.) Still, the addition of punk clowning to the mix creates an aura of unpretentious fun and genuine anarchy. “I wish that future novelists would reject the pressure to write for the betterment of society,” Ottessa Moshfegh told Bookforum in June, a worthy aspiration for theater makers, too. Everyone is stressing over post-pandemic theater’s social responsibility; how refreshing to see a piece which does not give a crap. 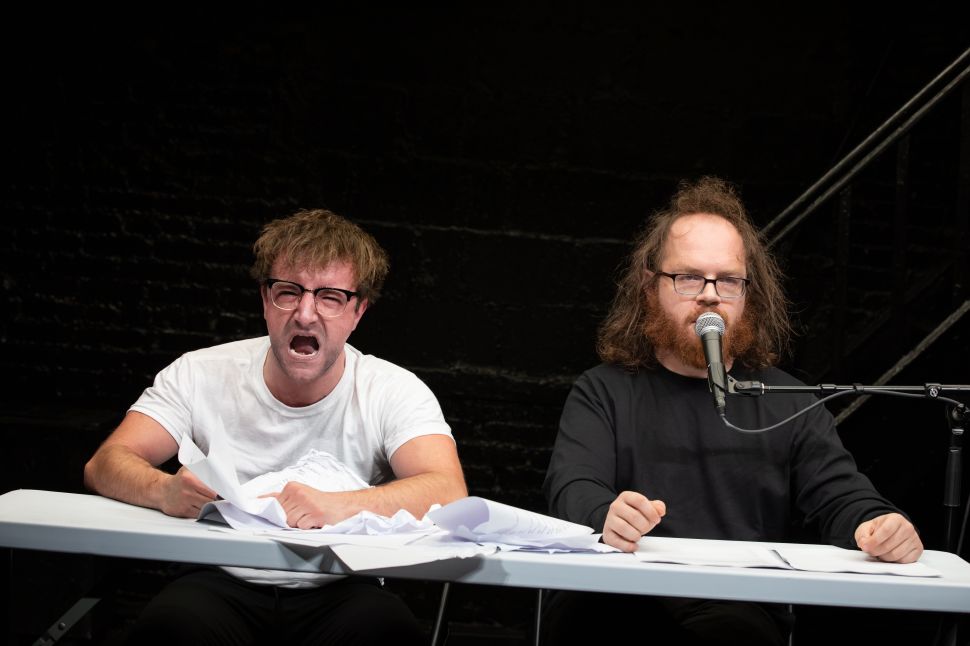