Late on Thursday evening, according to new reports, workers on the University of Hong Kong campus quietly removed a statue that had been taking up residence on its plinth for over two decades. The sculpture was made by Danish artist Jens Galschiøt in 1997; he did so to commemorate the territory of the colony of Hong Kong no longer being controlled by the authority of the United Kingdom and being handed over to the People’s Republic of China. Galschiøt’s Pillar of Shame sculpture, which depicts a column of twisted and anguished bodies, was made to acknowledge the atrocities committed by the Chinese Communist government in 1989.

In Hong Kong, amidst recent government crackdowns and large-scale protesting in response to newly-issued regulations from Beijing, officials have been working overtime to scrub out public acknowledgements of the Tiananmen Square Massacre. Hong Kong’s Tiananmen museum was shut down in June after authorities claimed that it had been operating without a license, and later in the year, the museum was raided and stripped of all its material.

Similarly, Hong Kong officials prevented a Tiananmen vigil from happening this summer, as well as arrested activists who’ve protested in favor of retaining public reminders of the massacre. The University of Hong Kong sculpture includes the inscription “The old cannot kill the young forever;” according to reports, many students on the university’s campus could be seen crying in the aftermath of the sculpture’s removal.

In March, the newly-opened M+ museum was accused of violating national security law. Subsequently, the museum opted not to display Study of Perspective: Tiananmen Square (1997), an Ai Weiwei photo that shows the dissident artist giving the camera the finger in the aforementioned square. Weiwei has spoken out frequently about censorship crackdowns in Hong Kong. Observer reached out to Weiwei for comment, and will update this story in the event of a response. 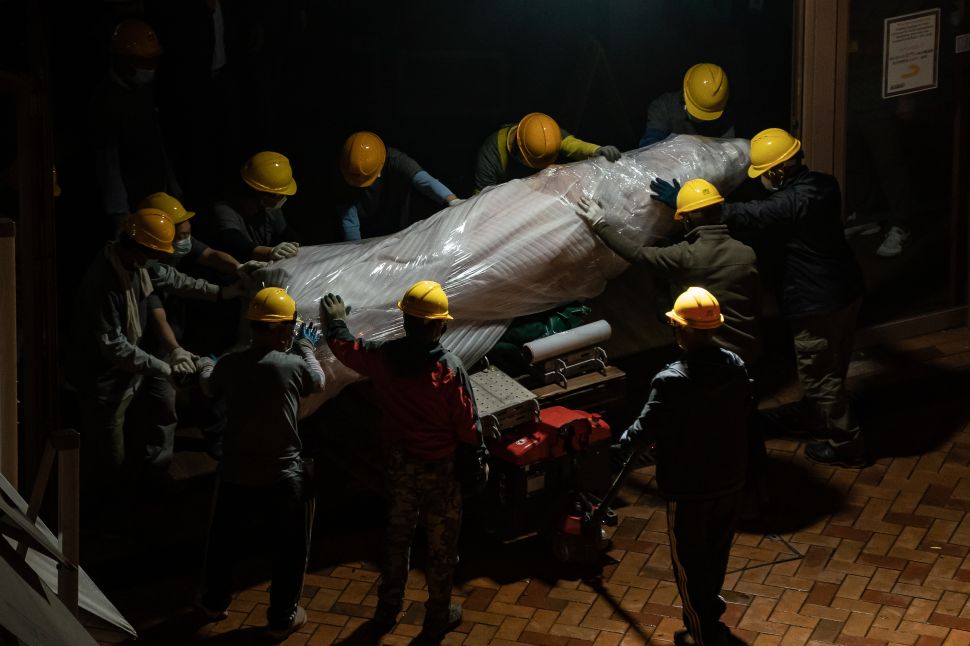