In the past two years there have been two Broadway musicals based on movies about actors who cross-dress out of desperation, creating wildly successful women alter egos who help them become better men. Mrs. Doubtfire is the more irritating one.

You can’t blame producers for trying to mine a historically deep vein. Aristophanes did it; Shakespeare did it; Tom Hanks and the late Peter Scolari did it for affordable rent. But these days a man frantically squeezing into a dress and wig, screeching in falsetto to deceive family and friends seems less comedy gold than grandpa jokes based in cisnormativity. The stage adaptation of Tootsie—first of the current microtrend—ran for eight months, closing in January 2020. At least it had a savvy, witty score by the formidable David Yazbek. Mrs. Doubtfire has… a cooking video interrupted by a pop-up ad for diarrhea medicine. That’s shortly before the title nanny accidentally sets her—his—fake boobs on fire while trying to cook for the family. Yes, it was funnier on film.

To be fair, the Broadway Doubtfire also has, among its assets, Rob McClure as feckless man-child Daniel Hillard, a role created by Robin Williams in the 1993 movie. Fed up with Daniel’s pranks and childish parenting, his wife, Miranda (Jenn Gambatese), files for divorce and places an ad for daycare help. Ever the actor, Daniel sees a job opportunity and disguises himself as a grandmotherly, Scottish nanny to spend quality—if clandestine—time with his three kids. It takes a versatile, show-offy comedian to pull off such a mashup of clowning and sentimentality, and Williams was at peak madcap for the task. For his part, McClure is a rare bird among Broadway leading men—a genuine triple threat, the spiritual descendant of tireless showmen such as George M. Cohan, born entertainers addicted to limelight (the actor also played Chaplin in a short-lived 2012 biomusical). Not crazy about the emphatic nasal attack of McClure’s tenor? No worries, he’ll wow you with deft physical comedy in full padded drag that switches into tap. No? Wait a second and he’ll wring tears as a father devoted to his kids. McClure can do anything—and makes damn sure you know it.

That super-trouper energy goes a ways toward making Mrs. Doubtfire bearable in the first act. Some—not nearly enough—comedy heavy lifting is apportioned to Brad Oscar as Daniel’s gay brother, a professional makeup artist, and J. Harrison Ghee as his partner in life as well as frocks. The reliably daffy Peter Bartlett staggers into a couple of scenes as Mr. Jolly, a TV kids’ show host flabbergasted to still be alive. Amid all the mugging and camp flamboyance, Jodi Kimura is an understated relief as a stony-faced TV executive, and Charity Angél Dawson, playing a dour social worker, kills time until she gets to unleash her crazy-good rock soprano after intermission.

Karey Kirkpatrick and John O’Farrell’s dutiful, mechanical book recycles most of the screenplay’s structure and its best lines, without adding much to justify itself as a musical. The songs (by brother team Wayne and Karey Kirkpatrick) are mostly novelty tunes rather than opportunities to deepen character or advance plot. In the climactic restaurant scene, during which Daniel simultaneously attends his wife’s birthday dinner as Mrs. Doubtfire and a job interview as himself (much changing and running back and forth) the team has concocted a flamenco song-and-dance routine for no particular reason except to hammer the theme of betrayal. Most of the night, you’re mentally checking off recycled genres: ’80s rock, comedy rap, Sara Bareilles-type ballad, feel-good inclusivity anthem. Each song sounds familiar, yet nothing sticks in the mind.

Worst of all, Miranda remains as underwritten here as she is in the movie. Sally Field held her own against Williams’s onslaught of goofy voices and scrunched-nose pathos with her innate charm and warmth. Gambatese, by contrast, seems stiff and glazed-over in a thankless role gasping for nuance and dimension. Same for Mark Evans as Miranda’s hunky post-Daniel suitor: he’s barely characterized. Here was a chance to depart from the source and find fresh emotional resonance, but no luck. With a main plot and b-plot both driven by the protagonist, we grow weary of McClure’s constant presence, chasing its virtuosity in circles.

It’s a pity because I admired this team’s previous offering, the Shakespeare-spoofing mashup of Elizabethan jokes and Broadway history, Something Rotten! That show had the advantage of not having to pander to families and was free to balance broad comedy and comparatively niche humor. Now they are going for the long-running tourist buck, and the Hollywood material has been bled of anything subtle or surprising. McClure’s Doubtfire follows the Williams playbook, physically and vocally: She’s a non-flying Mary Poppins with, you know, dude junk.

Lamest of all is the show’s politics. There’s a problematic project at the heart of Mrs. Doubtfire (same as its cousin, Tootsie): a brilliant but impulsive man channels his resentment into a strong woman of his own creation, who proceeds to outperform all the women in his world, until he is revealed as a fraud. But all is forgiven as our hero emerges, butterfly-like, from the discarded feminine shell a wiser version of his former self. It’s a patriarchal pangender fantasy that simultaneously de-centers and re-centers cishetero masculinity. Fancy lingo for: kinda outdated and icky.

Which also neatly describes the show in general, a wanna-be blockbuster full of bland, out-of-the-box music and lyrics, and cloying, family-friendly platitudes. It may ultimately be too slick for kids and too schmaltzy for adults. But who knows? The masses dug Mr. Six for years. Branded, corporate musicals are a Broadway staple. I won’t be shocked if Mrs. Doubtfire settles in for a long, lucrative run at the (big sigh) Stephen Sondheim Theatre. 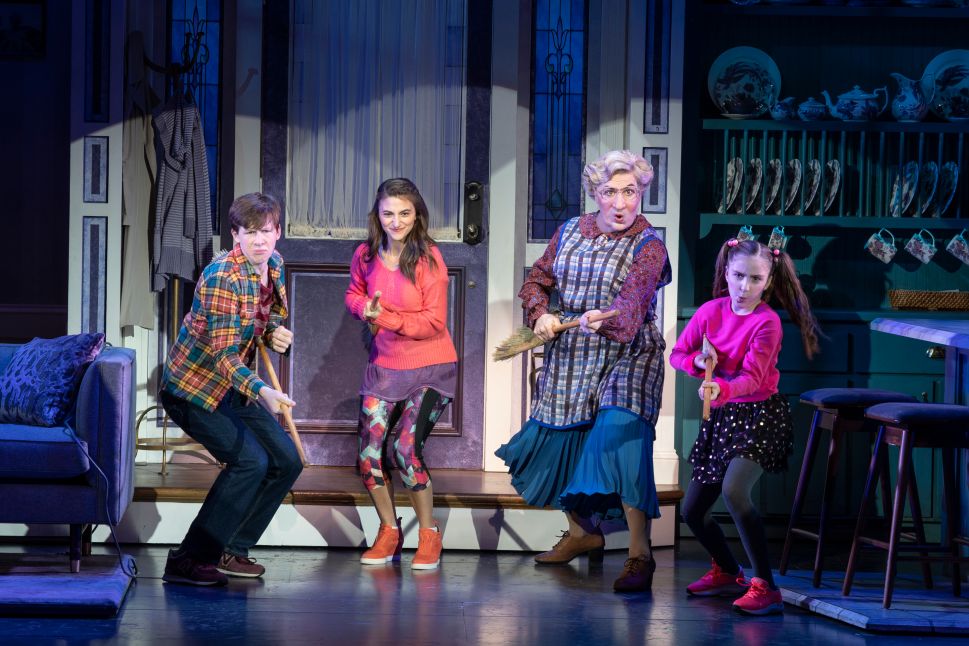