Anya Chalotra is terrified of spoilers. That’s one of the first things that she tells me on a video call in August, just moments after wrapping up a Television Critics Association panel about the highly anticipated second season of The Witcher with creator and showrunner Lauren Schmidt Hissirch and co-star Freya Allan.

“I can barely string a sentence together anyway,” she said with a laugh. “I find it so hard to articulate myself. And then I have to throw spoilers into the mix, and I’m like, ‘Don’t do this to me!’ I don’t know how to section off information in my head and be able to just say the one thing that I’m supposed to say, so that’s why I keep hush-hush most of the time. Until it’s out. Then I can be a blabbermouth.”

Chalotra can finally blab all she likes. Two years after debuting in 76 million households on Netflix, The Witcher returned on December 17th with another eight-episode season, picking up in the immediate aftermath of the bloody and gruesome Battle of Sodden Hill.

Based on Andrzej Sapkowski’s best-selling book series, the hit fantasy drama series centers on Geralt of Rivia (Henry Cavill), a solitary and magically enhanced monster hunter who struggles to find his place in a world where people often prove more wicked than beasts. But when destiny hurtles him toward Yennefer of Vengerberg (Chalotra), a powerful mage, and Princess Cirilla of Cintra (Allan), a young royal with a dangerous secret, the three must learn to navigate the increasingly volatile Continent together.

The show’s first season followed the three characters at different points in time, exploring formative events in each of their lives before merging in a single timeline that culminated in the fateful final battle. In the case of Yennefer, who was born with a hunchback and consistently overlooked by her peers, she rises the ranks at Aretuza, a school for sorceresses, when she unlocks her true power as a mage. She eventually sets out on her own and forges a hot-and-cold romantic relationship with Geralt. But after conjuring a fireball to help her fellow mages fight an army of Nilfgaardians, Yennefer has to pay a personal price and is taken captive by her former Aretuza schoolmate, Fringilla (Mimî M. Khayisa), who is desperately trying to get back in Nilfgaard’s good graces after losing the Battle of Sodden Hill.

In the second season, Geralt—who is convinced that Yennefer has died—brings Princess Cirilla to the safest place he knows: his childhood home of Kaer Morhen. While the Continent’s kings, elves, humans and demons strive for supremacy outside its walls, Geralt must protect the girl from something far more dangerous: the mysterious power she herself possesses.

Chalotra spoke about the evolution of Yennefer and Ciri’s relationship in the sophomore season, the experience of working opposite Cavill and Allan and the intricate fight sequences that are a stark contrast to her days in the theater.

Observer: When you were first cast in this role, there were a lot of Witcher fans who were not pleased, because you were not what they had expected. But you have risen above those reservations and embodied this role so beautifully. As a Southeast Asian woman, what does it mean to you to bring that kind of representation to the Witcher world?

Anya Chalotra: I feel very proud. It was very exciting—the prospect to push these boundaries that were created within the show and what was written when it came to the casting of Yennefer and a lot of the other characters on the show, actually. My cultural background, being raised a South Asian woman, of course, feeds into any character that I play. I’m so glad that I’m in a position with The Witcher and now within the industry where there are many Indian women who feel very excited by this icon, Yennefer, played by an Indian woman.

Yennefer goes on such a massive, decades-long journey during the first season. How were you able to track her progression through the years from her pre-transformation days to the Battle of Sodden, where this season picks up?

I left that to everyone else to make sure they were telling me that if it was too similar to the Yennefer when she was 14, then I’d change. (Laughs.) No, I had to really focus on it scene by scene. It wasn’t necessarily age that informed the playing of these different ages of Yennefer in Season 1. It was scene to scene and moment to moment. Every scene that I was going to play at one stage of her life, I’d definitely think about what came before in her life, and that would change the way I said certain lines. So her experiences affected the way I played the scenes, but I wouldn’t say I focused on mannerisms as much.

The synopsis for this season says that, after surviving the Battle of Sodden, Yennefer is a changed woman who strikes a dangerous deal. How would you describe her evolution this season?

She really does still go on that journey of self-discovery, the same as Season 1. She just meets new people in Season 2, which ultimately changes her again and for the better, because she’s older and wiser. I think that’s all I can say . . . (Smiles.)

Your showrunner, Lauren, has already teased that the dynamic between Yennefer, Fringilla and the new Francesca Findabair (Mecia Simson) is really rich and multi-layered. How would you say all three women are both alike and different?

Their struggles are different. Obviously, Fringilla and Yennefer share that common bond within their childhood. I think there’s a big space that they have for each other in their hearts, and you definitely see that, despite what happens. They are bound by that experience that they had as a child.

When you did press interviews for the first season, you did a lot of them with Freya, but I was surprised to realize that you two didn’t really share any scenes together. Now that you’ve finished filming the second season, what has it been like to work opposite Freya and what is your favorite part of portraying the dynamic between Yennefer and Ciri?

My favorite part of working with Freya is . . . she just is Ciri. (Laughs.) She just embodies her, and I love Yennefer and Ciri’s dynamic. I think we all know where they’re heading, but it’s that mother and daughter relationship. What I love so much about this relationship, and why it’s so important to Yennefer in this season, is because she sees herself in Ciri. I honestly believe—and I speak about this a lot with my parents—that it’s only your children who are able to change you. Yennefer really took that [idea] into what she saw in Ciri, especially with what she’s experiencing in this season, and the idea that she has the potential to help her changes Yennefer’s world completely.

You and Henry Cavill share some pretty intense scenes throughout the first season, and I assume that that will continue into Season 2. What has it been like to work with him, and how has that experience changed you as an actor and as a person?

It’s been such a learning curve for me to work alongside Henry. He is incredibly professional, polite, brilliant, very experienced, clearly in the world of acting and being on sets that big, very experienced in being a leader of a team with such grace. It’s a real privilege to play alongside him, especially with the relationship Yennefer and Geralt have, which is so animalistic and raw and sexy. It was very important to work with Henry through that relationship and that aspect of the relationship, because he was just so empathetic, and his experience just helped in every conversation that we had. He was very honest. He cares about you; he cares about the show.

It’s no secret that the production value for a show like this is absolutely out of this world, and the stunt work—even if a lot of special effects are added in post-production—is world-class. What has it been like to return to that world and to try your hand at learning such intricate fight sequences for the times when you actually have to wield a weapon as opposed to relying on magic?

Oh, I absolutely love it. If I could have a whole season of fighting . . . I just love the physicality. Aside from what it looks like, the choreography of fight and the etiquette and the teamwork is what I recognized. I was classically trained in theater, so for me to be able to dive into fightwork and that choreography and that team effort means a lot to me on a film set, because some things don’t necessarily feel as collaborative as when you’re in theater. Because [when] you’re seeing everyone, every decision is made together, or it should be, and it’s a sacred space. It’s smaller, so it’s more intimate. So fighting, in that sense, meant a lot to me. But also, God, I just love punching things and having a place to do that, having a play. (Laughs.)

The first and second seasons of The Witcher are now streaming on Netflix. 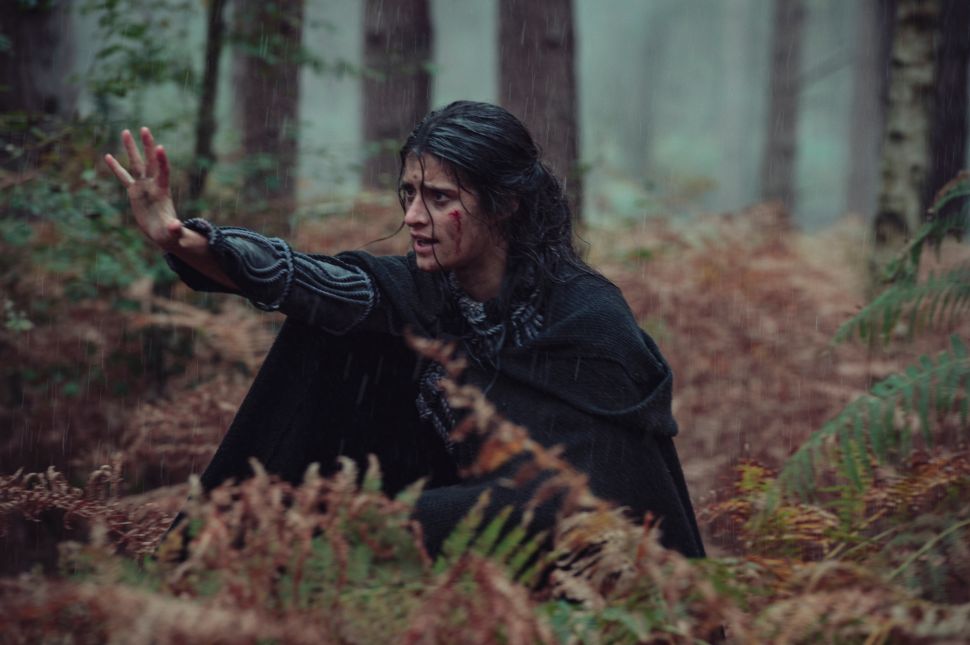