Neil Young is happy with his wife, Daryl Hannah, and disagrees with Trumpers, some of whom he’s friends with, and thinks we’re not doing enough to save our planet. And he is disappointed by digital sound quality, which he’s expressed by repeatedly praising vinyl and trying—very sincerely—to improve the quality of digital Neil Young releases.

You’re no doubt hearing things about a legendary band trying to record an album quickly and with no overdubs, so it might help to see Barn as Neil Young and Crazy Horse’s Get Back, an unadorned chunk of work done on the spot, including some of the songwriting. Last summer, Young and Crazy Horse—Ralph Molina, Billy Talbot, and Nils Lofgren—went to Colorado and set up with Niko Bolas engineering remotely from a recording struck. The sound is perfect. The fuzzy oomph of electric Neil Young is not something I would give up lightly, and I love the easy slouching of Talbot and Molina as a rhythm section.

“Welcome Back” is an “old song” which occasions Neil to notice that he has been “singin’ this way for so long.” It’s eight plus minutes of Crazy Horse at its most open, the slow burn of “Down By The River” without the murder, even though it feels close. Neil is thinking of what he’s been through and how this “storm” might “remind me of what we are,” which seems to mean both all of us and his band of more than forty years. This version of Neil? I want infinite minutes. I absolutely adore Barn when I ignore the lyrics, which is sometimes quite hard.

Problem is, Young is a 21st Century Democrat through and through. As much as I respect Young as a guitar player and a lover of sound, I cannot really deal with Young as a Person Trying To Make Sense of Things. The complainers of “Change Ain’t Never Gonna” are Young’s vision of anti-vaxxers and other people creating the climate change he fights. Life is unfair, because “the government said / They had to get new cars / Leave those fuel burners / and they went to Mars / They turned on everyone / For being so controlling / And takin’ away the freedom / They had always been knowing.” I understand that Young’s small c conservatism is what makes him hug that tube amp so close, and it’s also what makes him determined to understand people he doesn’t agree with. What this means, though, is that we’ve kept “Down By The River” and lost “Southern Man.”

This is an odd development for someone so comfortable with his own anger, but maybe not so odd for the guy who wrote “Let’s Roll.” Young’s politics would be irrelevant if he wasn’t so committed to sharing them. I was hoping he’d do a better job of connecting the “Human Race” he sings about with the idea of “freedom” his rebels sing about. I simply don’t know what to do with anybody proudly claiming one country right now, let alone two, as Young does in “Canerican”— the Toronto-born Young became an American citizen a few years and voted in the last election for the man he called on a NPR, a “truly great president.” Like I said—Democrat.

I prefer the film Hannah made about Barn, which captures the geniality and goofiness of the band, though I don’t know if I can tell you to watch all seventy-three minutes with a straight face. I can tell you that I absolutely do not regret paying $20 a year to support the Neil Young Archives, Young’s fairly serious online catalog website. If you go to the “Cabinet” and spin the metallic interface wheel, you can go all the way back to 1963 and work with a web-based jukebox that is substantially better-sounding than Spotify. Young’s body of work is so overwhelmingly valuable that somewhere in the middle of 1972, you may want to pledge allegiance to him. That I’m comfortable with. 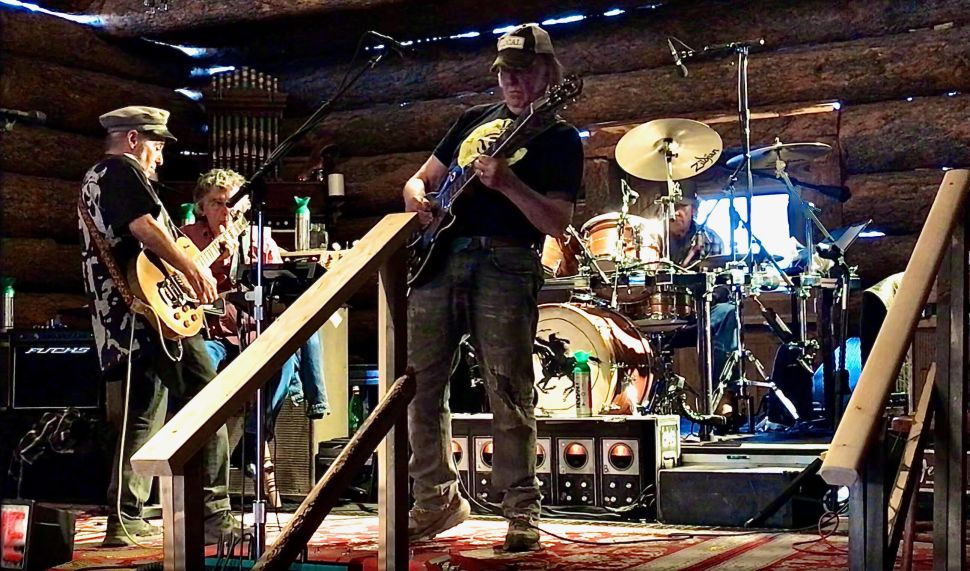