Actors sometimes catch heat for not acting their age—specifically, for acting younger than their years—but Kimberly Akimbo takes that tendency to a bizarre new level. This quirky, compelling musical by David Lindsay-Abaire and Jeanine Tesori, world-premiering Off-Broadway at the Atlantic Theater Company, has a 62-year-old actress going on 16 named Victoria Clark.

It’s a bittersweet 16. Kimberly Levaco is a teenager suffering from Methuselah Syndrome, a rare (and fatal) genetic disorder that causes her to age at more than four-and-a-half-times the normal rate. By the time she reaches full teenage bloom, she’s ready to cash in her chips. “Getting older is my affliction,” she sings to her high school peers. “Getting older is your cure.”

Paramount among the pleasures of this show is watching a seasoned Broadway veteran melt into a willowy, innocent, unassuming young girl. Clark parks her star status at the stage door and surrenders to the character she’s playing. “All of us have these different facets to our personality,” the actress insists. “As actors, we get to tap into those different people living inside of us and give them air time. There has always been a big kid inside of me, so that is the joy—and also the difficulty—of this role, actually accessing her and allowing her free rein.

“It’s rigorous on me in every way—physically, emotionally, vocally—but I’d say every bit of my life experience and my experience as an actor comes into play. It feels as if I’ve tapped into a deep part of myself that wants to grapple with mortality and bathe in the beauty of being alive.”

It was Tesori who recruited a reluctant Clark for Kimberly Akimbo. “Almost two years ago, she called me up and told me she was working on something that might interest me,” Clark recalls. “I didn’t seem right for it, but she persisted and sent me some of the music. I still said, ‘Oh, no. This isn’t for my voice. You need a big old Broadway pop singer.’ She just said, ‘Trust me.’”

A gang of three—Tesori, Lindsay-Abaire and director Jessica Stone—finally convinced Clark to make the leap, and the upshot is she’s gotten some of the best reviews of her career. Yes, she’s glad she said yes. “These are artists who are in their prime. They asked me to look at it, then come in and talk to them about it. The score really touches me, and the story is so incredible.”

Getting rolling after the pandemic was rough. “We all came out of hibernation for this project. It felt very odd, going back to work, but Jessica had a very clear vision of what she wanted.”

Kimberly Akimbo is an odd-duck dramedy with off-center charm and poignant underpinnings. By turns, it can be profoundly funny or deeply moving. “That’s David and Jeanine,” Clark says, spotting the instigators immediately. “They have such extremes inside of themselves. They’ve got the wit and the humor and the nonchalance—plus this work ethic that is incredibly distilled and defines them as artists. They dig, and this show requires a lot of digging for the actors.”

It is not the first time Clark has encountered a musical heroine with an age discrepancy. In her 2005 Tony-winning role in Craig Lucas and Adam Guettel’s The Light in the Piazza, she was a Southern mother summering in Florence with a 26-year-old daughter, who, because of a childhood accident, has been left with the mind of a 10-year-old. She watches the daughter fall in love with a rich, ardent Italian who construes her condition as innocence and proposes marriage.

Similarly, Kimberly is out of place in the real world, a painfully conspicuous misfit with her teen besties. She shrugs off a threat of pregnancy with “I went through menopause four years ago.”

She doesn’t even belong at home. Her special malady has driven her father (Hand to God’s Steven Boyer) to drink and her mother (Cry Baby’s Alli Mauzey) to another pregnancy, hoping for better results. Thus Kimberly finds her room turned into a nursery, forcing her to hit the road with her for-want-of-a-better-word “love interest,” a tuba-tooting, anagram-obsessed nerd named Seth (Justin Cooley). Punctuating all of the above is Kimberly’s Aunt Debra (Head Over Head’s Bonnie Milligan), an ex-con trying to organize the local youths in a money-laundering scheme. Milligan’s Aunt Debra swipes scenes right and left while she spreads comedy chaos wherever she goes.

“It is such a joy to work with these actors,” Clark trills. “Sometimes, when I’m really worn out, I just think, ‘Well, I get to see Bonnie and Alli and Steve—the whole gang. They are incredible.”

As for Cooley, her leading man, he’s 18, a music student from Texas Christian University in his Off-Broadway debut. Also, she adds, “He’s very grounded and present, with great instincts.”

Sarah Laux, who did the costumes, and J. Jared Janas, who designed the wigs, are chief among Clark’s accomplices in creating her contradictory image. “They really helped to define this character,” she admits. “Even in my head, I pictured Kim in this gray dress and sweatshirt. We started fittings very early on in the rehearsal process, and Sarah said to me, ‘Kim’s a badass. I think she dyes her hair. I think she has streaks of color in her hair.’ Sarah really resurrected her own badass self from her teenage years for me. I certainly wasn’t a badass. I was a good girl—dorky, trying to find my look. I wore a uniform for 12 years of private school. I didn’t know what to wear to football games Friday nights or how to talk to boys. Kim looks a lot better than I did.”

One of the pleasant side effects of Kimberly Akimbo is that it allows Clark to revisit her days at dear old Hockaday, an all-girls school in Dallas. She says it was a nice way to go, but “there are some key players who aren’t around anymore. I wish my mom and dad could see this. My best friend from grade school came. Anybody that I have loved who has come to see it—there have been some weeping and some gnashing of teeth. People who know me know this is a journey.”

Reviews for the play have been favorable and the rumor is that it will make the big leap uptown by spring, the way The Band’s Visit pole-vaulted from the Atlantic to Broadway and the Tony podium. “The cast is the last to find out things,” Clark claims. “We just keep our heads down and don’t read the reviews.

“But, personally, I would love to share it with as many people as possible because I think any story that talks about perseverance and overcoming personal struggles to embrace life is the story we need right now. Kim is an unlikely hero. Most of our heroes’ journeys are, let’s face it, by men. The fact this is a woman—and a young woman, at that—is very powerful, I think.

“I’d like people to take away from this a sense that life is short but it’s precious. Carpe diem! Stop complaining about what you don’t have. Take advantage of every moment. Don’t hide.” 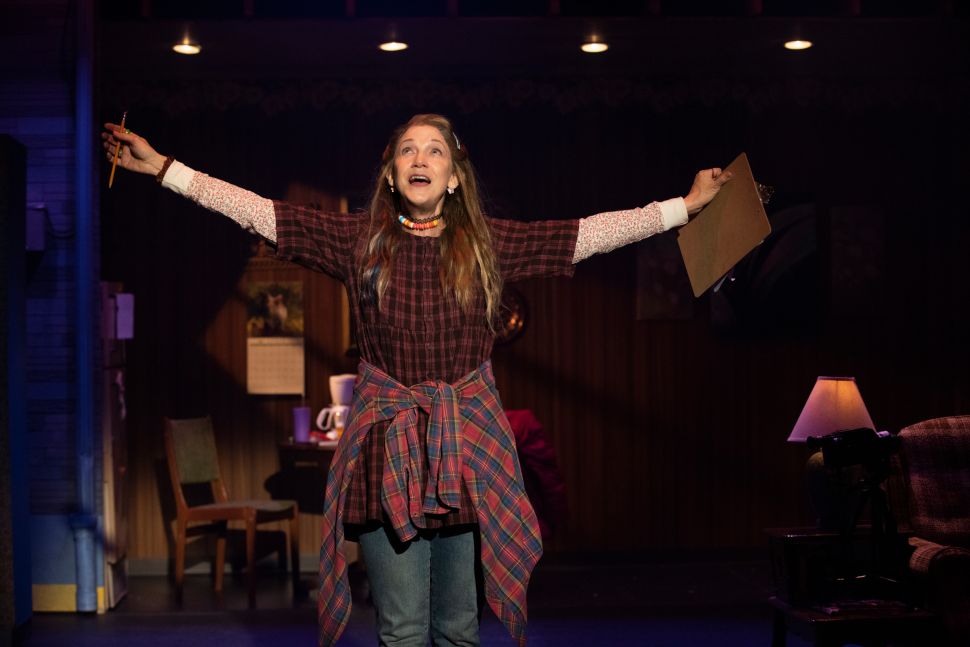