Carrie Mae Weems has consistently pushed the boundaries of art for the last 40 years. Her work is globally recognizable and in her latest exhibit, “The Shape of Things,” a wildly ambitious multi-installation, film, and performance based show at the Park Avenue Armory she is continuing to push difficult conversations further. The show itself is overwhelming in size and addresses larger race and racial relationships head-on in this work regarding the larger sociopolitical moment in the United States, although this is nothing new for Weems.

The larger subject matter and approach is in step with who Weems is both an activist and artist. Her 1984 photographic project, Family Pictures and Stories utilizes the work of celebrated author and anthropologist Zora Neale Hurston, as well as the photographs of Roy DeCarava, to trace out a larger socio history of the lived Black experience. Weems’ now famous 1990 photographic project “The Kitchen Table Series” in which she is the featured subject along with a few other figures, seeks to interrogate larger racialized and gendered stereotypes. The photographs which are in black and white are literally shot around a kitchen table and serve as the site of short vignettes that take place over this social space. Both intensely private and intimate but also seeking to shed light to the public. These early works help to set the stage in what Weems is now doing through “The Shape of Things” and on a much grander scale. She has overtaken the cavernous 55,000 square foot Wade Thompson Drill Hall at the Armory.

American politics being perceived as a circus is nothing new especially given the last decade within this current climate; however, Weems digs deeper into this and exposes many of the larger racial injustices and hypocrisies that exist given a failed justice system and often corrupt and rigged political machine. Given the size and scale of the various installations the show teeters between creating intimate spaces in more public contexts. The show also combines old and new works that Weems has made over the last decade but has a new sense of urgency and consideration in this moment.

Upon entering the main hall of the Armory, directly to the left is a larger scale circular area that is separated from the rest through the use of sheer billowy fabric. All Blue–A Contemplative Site (2021), gives the sense of being able to see inside even though one’s view is slightly obstructed. Ten wooden stools of various sizes that have been arranged into a semi circle for viewers to sit and observe. The wall is illuminated with a floor to ceiling projection of a night sky, various stars and planets are visible. A cut out full moon is attached to an empty door frame that features three front steps. It invites viewers to sit and take in the view in front of them and unpack what this show is addressing. With its close proximity to the entrance could be experienced first or as one leaves.

Sit, Stand or Speak from 2021 utilizes a very minimal aesthetic. This piece features a square desk or table and chair with a paper megaphone that has been placed on a stand. Sitting down the speaker part of the microphone is almost level with the viewer. It is a very powerful aesthetic and there are roughly ten of these that are set up on either side leading to the entrance to the Cyclorama.

The largest of the installations in the show is Cyclorama- Conditions, A Video in 7 Parts. This mini-circular amphitheater of sorts houses the full feature 40-minute film Weems created. The film is projected over roughly 10 panels, scale and proportion are played with helping to utilize the space even more. It helps to create a 360 effect making for a more interactive experience for the viewer. The use of cycloramas was also popular at the turn of the century and helped to create a feeling of motion for viewers. The film features a wide range of imagery spanning from the January 6 insurrection that has been cut with depictions of clowns. Another part features the silhouette forms of dresses and figures from the 19th century over a scene that Weems narrates. And another part of the film features 10 different people wearing similar clothing that are depicted getting rained on, the rain slowly morphing into snow.

This exhibit takes on a lot in terms of the subject matter but also in the literal scale of it. “The Shape of Things” incorporates a variety of elements ranging from a piece entitled Lincoln, Lonnie and Me from 2014 that takes on a 19th century circus aesthetic complete with blown up posters that have a figure in striped pants, bowtie and more that looks like a carnival worker from this era, as well as a diorama that features a stage setup. On the diorama there are video images that are projected that utilize archival footage from protests and a reading of the Gettysburg Address. This installation also utilizes a Pepper’s ghost, an optical illusion originating from the turn of the century. This portion of the installation allows viewers to view the video behind a barrier which helps to underscore this audience element but also furthers the feeling of being at a dime show which was a popular form of entertainment and part of the larger elements of the circus.

Another portion of the show happens towards the backside of the space. Viewers walk through a door that has been fixed with large light bulbs around the entrance which furthers the larger political circus theme. The entrance gives way to a red and black color combination that is repeated from the previous installation. Here the walls are painted red and various framed pictures have been placed on the floor. They are situated on shelves along the wall, similar to the street memorials that often spring up after someone has passed away.

Drawing on the Black Lives Matter movement, this installation also is meant to serve as a memorial to those who lost their lives due to police violence. Along another wall, Its Over – Another Diorama is encased in glass and dedicates a scene with a taxidermy swan and here more framed images are placed throughout the installation along with balloons, candles, more framed photos. The space is also separated through the use of thick red patterned curtains that are held to the side with gold fabric tassels.

This installation moves on to Missing Links (2 Different Bodies of Work) from 2004, which plays with larger notions of animals and humans. It has a separate feel from the other two pieces in this section and has six framed photos, installed in a parlor like setting complete with wallpaper and vintage wood chairs. This part of the exhibit resembles the turn of the century period rooms that can often be found in museums. The last of these three installations is The Weight from 2021. It consists of large pink puffy balls which look like cotton candy as well as miniature sculptural busts that have been affixed with large pink balloons on top of their heads.

The name of the show comes from the 2017 residency Weems did at the Park Avenue Armory. Her residence concluded with a convening in which a wide ranging number of artists, scholars, musicians, and creative thinkers worked across an array of spectrums in an effort to create more of a dialogue with a series of performances, conversations, and readings. “The Shape of Things” held a series of public events with a wide number of intellectuals and artists earlier this month featuring Hank Willis Thompson, Agnes Gund, Antwaun Sargent, Julie Mehretu, and Deborah Kass, among others.

The show is deeply immersive and is trying to unpack many of the events that happened in the US over the last year and also is a commentary on a larger racialized history. Weems has created expansive space for herself and others in this show, shedding light on many complex issues that are still being reckoned with. 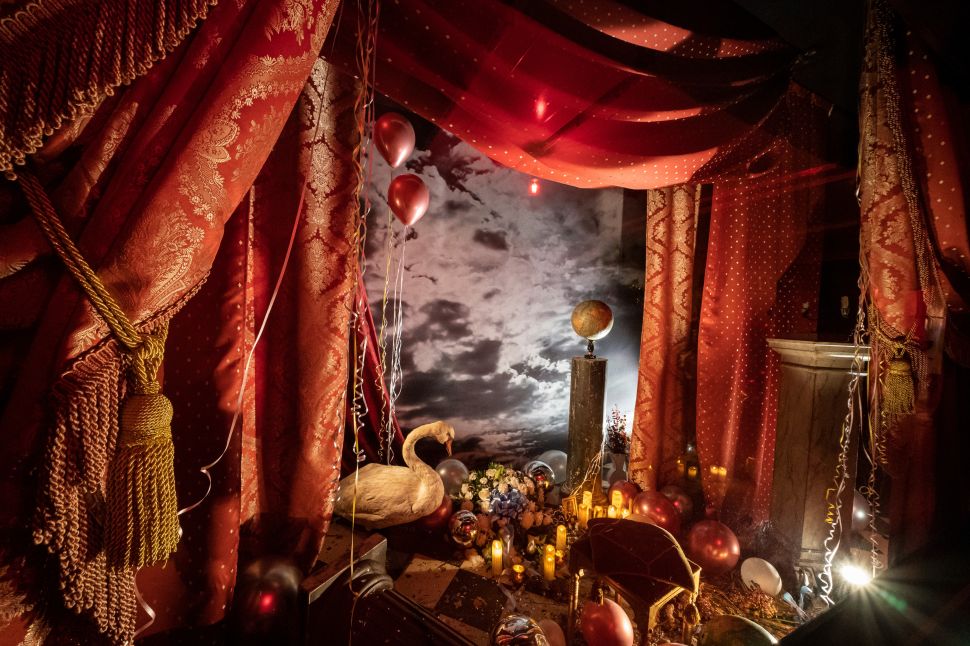