“Detail from a Mural” introduces a selection of 12 exceptional paintings from Egyptian-born artist Ahmed Morsi. On show at New York’s Salon 94 through December 18, the artworks encapsulate the oneiric, nostalgic and surrealist vision of one of the most influential figures of Arab modernism who has made New York City his home since 1974.

Ahmed Morsi graduated with a degree in English Literature from the University of Alexandria and studied drawing under Italian artist Silvio Bicchi. Born in 1930, Morsi grew up in an interwoven and multicultural Mediterranean world, an energy that coalesced in cultural ebullience and renaissance. This “Alexandria School” included artists who, like Morsi, came of age during the 1940s and shortly after World War II, such as Mounir Ramzi, Alfred Farag and Edwar al-Kharrat.

As his attachment to Alexandria became overwhelming, Morsi later traveled to Iraq (1955-1957) at a time coinciding with the rise of the Baghdad Modern Art Group and Arab self-affirmation. In its Manifesto (1951), the group declares, “We dream that there is a dream that connects us with all the beings that simply dream. A dream we call Baghdad.”

Morsi developed in Iraq a lifelong interest and commitment towards Arabic art criticism. He first returned to Egypt after his stay in Baghdad to theatre and opera. As a critic and translator, Ahmed Morsi authored the first Arabic monograph of Picasso in 1969 and translated the surrealist writings of Paul Éluard and Louis Aragon into Arabic. He was the art director and editor-in-chief of the avant-garde literary and cultural magazine Galerie ’68. Morsi stopped writing poetry for 30 years in the aftermath of the 1967 Six-Day War and the emotionally-crushing Arab defeat. The forthcoming release of Poems of Alexandria and New York (2022, trans. Raphael Cohen) will bring his poetry (totaling over 1,000 pages in Arabic, with a first publication at age 19) to an English reading audience for the first time.

In the airy and light-filled room of New York’s Upper East Side, Salon 94 presents Morsi’s artworks, spanning from 1948 to 2010. They carry a distinctive uncanniness, reminiscence, and the symbolic, gentle movement and hypnotic hues of the Alexandrian sea he continues to miss.

“Details from a Mural” channels Morsi’s artistic journey from the figurative to the more symbolic and surrealist. His early career artworks are mainly “Folk Realist” portraits showing everyday people captured in moments of reveries and meditations. For instance, Untitled (Window in an Alexandrian Night, 1948) reveals the intimacy of a naked woman leaning by her apartment window. We feel the breeze caressing her body; her hazy ruminations as she perhaps struggles to go back to sleep. The broad outline of the minimalist and hairless figure smelling the scent of a flower in Untitled (1954) convey simplicity and the timelessness of olfactory memories. Painted in the same year in a similar oil on wood medium, Untitled (Fallah, The Peasant, 1954) exposes laborious social conditions in the hollows of this hard-working peasant’s face.

Elements such as conches, fish and string instruments, populate some of the artworks in touches of festive abundance and recollections of a childhood spent by the seaside. In addition to his paintings from the 1940s and 1950s, “Details from a Mural” also presents Morsi’s most evocative, post-Iraq, artworks with their eerie anthropomorphic characters inhabiting otherworldly realms which sometimes evoke a reimagined past while belonging to a non-place, outside or beyond time.

Morsi reimagines creation in Adam and Eve (1959), in which a male and female couple, naked hold hands in front of a gradated violaceous background. Next to them, a green creature carries a red apple. In this reconstituted Garden of Eden, Adam and the vividly-green creature stare at the viewer in an uncomfortable scenography of complicity, while Eve’s gaze turns towards Adam as if asking a question, knowing that a significant something is about to start. In the Islamic tradition, Eve is not blamed for eating the forbidden apple and both she and Adam are forgiven.

Tenderness permeates Morsi’s Untitled (The Embrace – Nude & Horse) from 1966. In this painting, a naked female and a horse seek an improbable connection. Her radiating warmth leans closer, to find comfort in the horse’s cooler hues. It’s an embrace of care and protection and the horse represents freedom as much as constant companionship and presence.

Morsi uses nakedness to express an essence and strip the human body from constructed differences and verticality. He said, “Your world is bound by conditioning, preconceived habits. In mine, the senses are free.”

Morsi’s poem entitled “Detail from a Mural” (1996) marked his return to writing, dedicated to his friend and Galerie ’68 co-founder, fellow Egyptian writer Edwar al-Kharrat. In it, he remembered Alexandria’s sailors, sky and stolen moments. We find a similar whisper of passing time in Salon 94’s “Detail from a Mural.” The white gallery walls clash with the dissonance of cerulean, teal, Prussian blue pigments of Morsi’s paintings, in the way that our past no longer fits in the present. Color resurrects emotions and senses.

Surrealism interrogates the value of our daily life against the immense possibilities of dreamscapes, subconscious worlds and alternative realities. André Breton, its main theorist, writes in his Surrealist Manifesto (1924) that surrealism is an artistic form “outside of all aesthetic and moral preoccupation.” Beyond household names such as René Magritte, Salvador Dalí or Max Ernst in Western Europe, surrealism was not always acknowledged as the global movement it was. It’s a relief, albeit one overdue, to see attempts at reappraising other artists’ contributions to this expressive (and in many cases, political) liberation.

The Met Museum’s ongoing show, “Surrealism Beyond Borders,” also strives to broaden narrow references and see artists engage in a multicultural dialogue, from Mexico to Japan. One can for instance view works from Egyptian-French surreal artist Joyce Mansour, a refreshing addition to conventionally male-dominated narratives and stages.

Morsi’s works have joined the collections of the Barjeel Art Foundation, the Sharjah Art Foundation, the Egyptian Museum of Modern Art, and others. He was recently on show at Art Basel (2020) and his inclusion in MoMA PS1’s “Greater New York” (through 18 April 2022), which feature Clocks (1996) and Green Horse I (2001), acknowledges an influence and heritage extending beyond Alexandria, Egypt and the Arab World. Foreshadowing this late recognition in Western institutions and on the immutability of home and labels, he said in a recent interview, “I have lived in NYC nearly as long as I have lived elsewhere. Am I an artist or an Egyptian artist? I am an artist.” 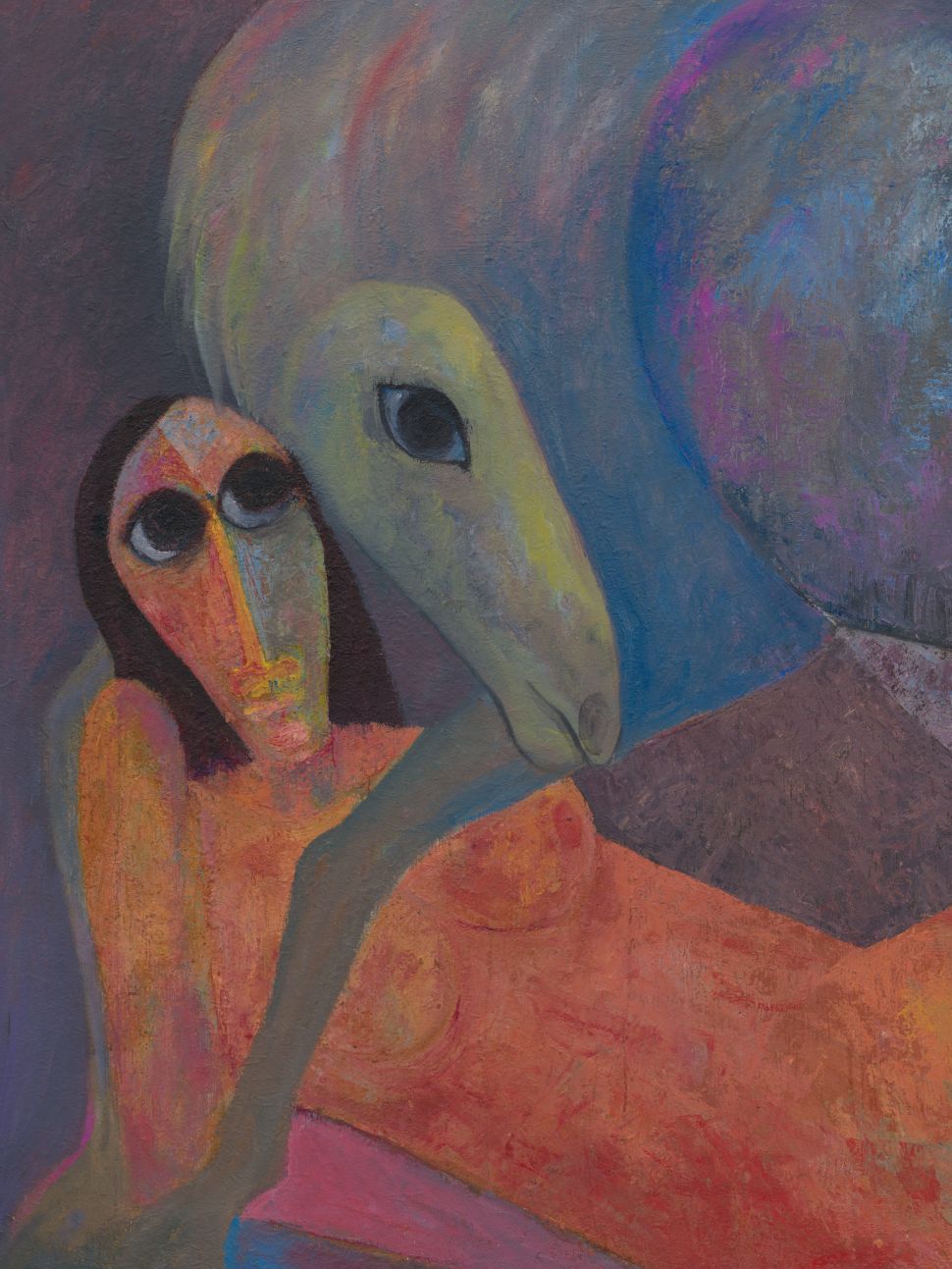